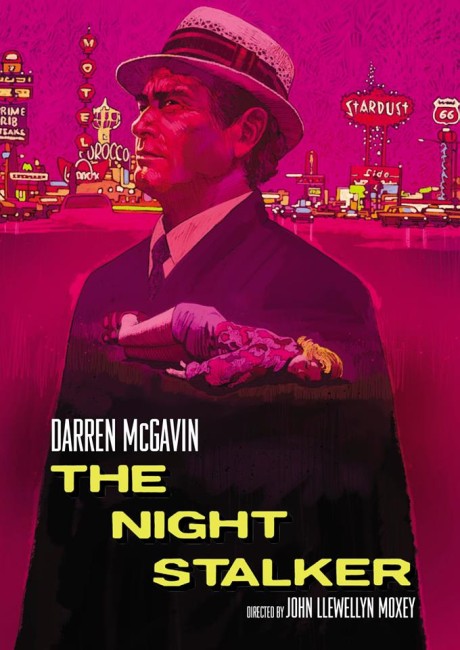 Journalist Carl Kolchak sits in a hotel room, narrating his story into a tape recorder. He was working on Las Vegas’s Daily News newspaper. His editor gave him the routine assignment of covering the death of a waitress from one of the casinos. Kolchak thought it odd that her body had been drained of all blood. Things became even stranger when other girls began turning up dead, also drained of all their blood. When the coroner stated that it seemed like an animal attack, Kolchak leapt on this and began calling it a series of vampire killings. He was ridiculed by the police department and city hall who demanded that he kill the story. However, as more murders and a series of blood bank robberies began occurring, Kolchak was left with no other conclusion that it was a real-life vampire in action. Believing the vampire to be a Janos Skorzeny, Kolchak determined to track him down at the same time as the authorities did everything they could to silence him.

The Night Stalker is a vampire film with a great reputation. It was hugely successful when it first came out – indeed, for several years, The Night Stalker was the highest rated tv movie ever aired in terms of viewing audiences. More importantly, The Night Stalker consolidated the reputations of producer Dan Curtis and veteran screenwriter and horror/sf author Richard Matheson who went onto a number of other fruitful collaborations. (See below for either’s other genre credits).

The Night Stalker also had important ramifications for the vampire film. Up until the 1970s, the image of vampire in the public imagination was almost exclusively centred around vampires in capes and European accents and was dominated by the interpretation offered by Bela Lugosi and to a lesser extent Hammer and Christopher Lee. Almost every single vampire film made before 1970 was set in the Victorian period and featured the vampire as a figure in a dinner-suit and cape.

It was only in the 1970s that the vampire began to be cautiously updated. This started with Dan Curtis’s tv soap opera Dark Shadows (1966-71), which cautiously placed the vampire into the modern world, although still retained a Gothic mansion as setting. Much more successful was Count Yorga, Vampire (1970) and its sequel The Return of Count Yorga (1971), which obtained some wry humour out of placing the caped vampire into modern day surroundings.

After the two of these, the gates were opened and we had all manner of modern vampire films with the likes of The Velvet Vampire (1971), Blacula (1972), Deathmaster (1972), Love at First Bite (1979), Salem’s Lot (1979), the tv movie Vampire (1979) and, the finest of them all, George Romero’s Martin (1976). Hammer lagged badly behind the trend, offering up Dracula A.D. 1972 (1972) and The Satanic Rites of Dracula (1973), both of which failed to come to terms with the idea of a modern vampire film. By the mid-1980s, the vampire had confidently stepped into the modern day and almost every vampire film made since has remained there.

The Night Stalker was one of the sharpest and most amusingly well written of these in its attempts to address the idea of a vampire in the modern-day. It is immediately apparent from the opening scene where the victim is not a bosomy heroine waiting in bed in a low-cut nightgown but a cocktail waitress on the Las Vegas strip. From there, Richard Matheson throws us into the midst a fast-moving detective story.

The cleverness of Matheson’s take on the vampire film is that he is making a detective story out of a mystery where we already know the answer to what is happening – as a result, there is a good deal of amusement in watching as Darren McGavin and the less astutely witted police puzzle over bloodless corpses, blood bank robberies and victims tossed into the middle of patches of sandy ground without any footprints leading there. There is an hilarious scene where the cockily assured McGavin presents the authorities with the notion of arming police officers with stakes and crucifixes. There is a conceptual smartness to the film – it is as though Richard Matheson had sat down and mapped out as an exercise in logic as to how a vampire might operate in the modern world and more crucially how the forces of law and order might react to the emergence of such.

As much as it is a film about how a vampire might operate in the present-day world, The Night Stalker is also a work about one man’s struggle to tell the truth when the establishment wants to silence and shut him down. Here the writing and playing of all involved is surprisingly strong and heartfelt. This dialectic – the battle between believing in the paranormal in the face of the forces of authority who are determined to silence the hero and enforce a hardline rationalism and insist that these things do not exist also formed the basis of tv’s The X Files (1993-2002, 2016-8). (Indeed, X Files creator Chris Carter has admitted that he was influenced by the various incarnations of The Night Stalker).

The great disappointment about The Night Stalker is that it gives its vampire almost nothing to do. Despite his character being shown as highly intelligent and calculating in its actions, Barry Atwater’s Janos Skorzeny gets no dialogue and is only ever present as a shadowy threat. When we do see him, he does nothing more than snarl with animal hunger and throw people around. The wrap-up of the film is surprisingly brief and abrupt – Kolchak tracks Skorzeny down to his home, enters, stakes him and then in the subsequent scene is forced to leave town. That’s it. The whole film sans commercial breaks runs for a surprisingly brief 70 minutes. What it feels like it needed was another whole act where Richard Matheson might have drawn out the tracking of and fight with the vampire or actually provided Skorzeny with some dialogue. As it is, all it feels like is that as soon as the identity and location of the vampire menace is identified the script makes the most direct possible beeline towards resolving the story.

Darren McGavin is perfect in the role of Kolchak. Indeed, Kolchak may well be the one role that Darren McGavin will be remembered for when his epitaph is written. Outfitted in characteristic straw pork pie hat, cheap suit and playing with a cheerful doggedness (not to mention outfitted with Richard Matheson’s wry 1940s-styled monologues), The Night Stalker would be considerably less than it is without Darren McGavin’s performance there to anchor it.

The Night Stalker was such a success that a sequel was produced with the much superior The Night Strangler (1973), which reunited Dan Curtis and Richard Matheson and featured Darren McGavin as Kolchak again, this time tracking down an immortal strangler. This was followed by the tv series Kolchak: The Night Stalker (1974-5), which had McGavin encountering various monsters including zombies, werewolves, demons and American Indian spirits, even undead bikers, on a weekly basis. Darren McGavin and Simon Oakland repeated their roles but neither Dan Curtis or Richard Matheson were involved. The series was cancelled after twenty episodes. This was later remade as Night Stalker (2005) starring Stuart Townsend as Kolchak, although this bore disappointingly little resemblance to the original and was cancelled after ten episodes. The Night Stalker should not be confused with the film Nightstalker (2002) about the activities of the true life serial killer Richard Ramirez, who was nicknamed The Night Stalker by the press.