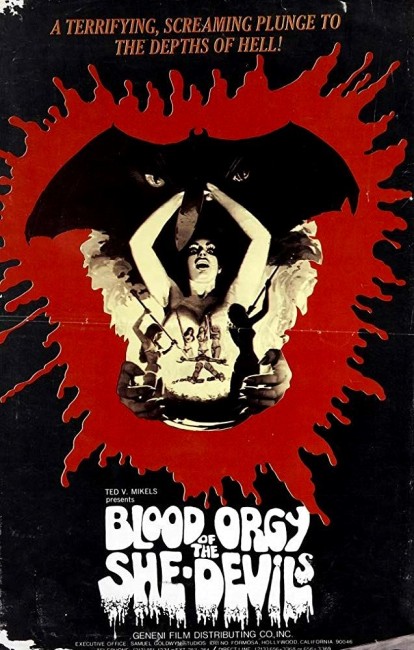 Lorraine joins the coven of the witch Mara. Mara conducts ceremonies where she incarnates various spirits through herself and shows her acolytes their past lives in which they were tortured and burned as witches. Mara then accepts payment from Rodannus to use black magic to assassinate an ambassador. Afterwards, Rodannus has Mara eliminated, although she is able to return to life and claim vengeance. Lorraine’s boyfriend Mark is sceptical about what she has become involved in. After being persuaded of the reality of Mara’s abilities, he goes to his university professor Dr Helsford who determines that Mara’s evil must be stopped.

Ted V. Mikels (1929-2016) was a director with a certain notoriety in Psychotronic movie circles. His was a name often mentioned in the same breath as other Z movie directors of the so-called grindhouse era like Herschell Gordon Lewis, Andy Milligan and Al Adamson. Mikels has been responsible for films such as The Astro-Zombies (1968), the notorious The Corpse Grinders (1971) and The Doll Squad (1973), which Mikels claims was ripped off as the basis of Charlie’s Angels (1976-81). Mikels himself sounds a fascinatingly bizarre figure – he lived in a castle in California and reportedly kept a harem of ten women.

Mikels sets up some interesting dramatic possibilities at the start with witch Lila Zaborin being contacted by someone wanting her to magically assassinate a diplomat. This is an idea that seems full of possibilities but all that Mikels does is get the assassination quickly out of the way, then has the client turn on Zaborin and she take revenge on him, whereupon this entire subplot is over and done with only a third of the way into the film.

The rest of the film consists either of Victor Izay’s professor sitting around lecturing or flashbacks to the acolytes past lives as witches to illuminate various points about witchcraft. Here Mikels seems to be wanting to conduct a dramatised documentary to show us how much research he has done on historical witchcraft. Eventually the professor and several colleagues come together to tackle Mara, focusing some flashing lights at the castle – but this is a climax that has been contrived with little in the way of any dramatic interest upon Mikels’ part.

Mikels should at least get full marks for coming up with one of the most entertaining and eye-catchingly lurid exploitation titles ever conceived. Alas, it is a title that on almost every single count proves to be false advertising. When it comes to the ‘blood’, Mikels’ camera shies away at any depiction of gore; and in terms of the promised ‘orgy’, the film remains woefully chaste, getting no more sordid than the image of a group of women dancing in diaphanous purple lingerie. The scenes with Lila Zaborin channelling her spirit guides and then starting to speak in the voice of her guide using cod-American Indian phraseology – squaws, papooses, tepees, “big shiny birds” – proves unintentionally funny.