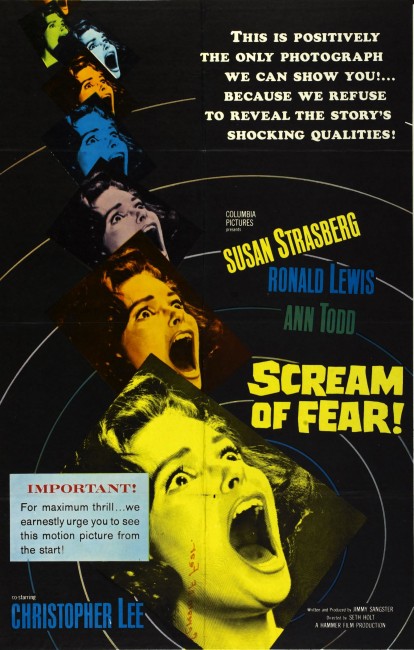 aka Scream of Fear

The wheelchair-ridden Penny Appleby arrives in France to join her father whom she has not seen in ten years. She meets her stepmother Jane who explains that her father is away for a few days. As she settles into the villa, Penny has a series of mysterious experiences, including seeing her father’s body in the summerhouse and indications that he is around, although nothing can be found when she calls the others. She is helped by the friendly chauffeur Robert, the two of them later becoming attracted. Together they piece together that Jane appears to have killed her father and is now trying to drive Penny insane so that she can claim the inheritance.

Hammer Films came to worldwide attention in the late 1950s with their two remakes of the horror staples, The Curse of Frankenstein (1957) and Dracula/The Horror of Dracula (1958), which presented new versions of the classic stories in colour, with lavish production values and what held considerable shock value for the era. It created a major industry out of the English horror film, made Peter Cushing and Christopher Lee into stars and Hammer the leading producer of horror in the world for the next two decades. Hammer went onto produce a great many sequels to their Frankenstein and Dracula films, as well as adaptations of other horror classics and original works.

The majority of Hammer’s output sits in historical settings, in particular their favoured 19th Century European milieu. Very few of their films take place in the modern day. The exception to this might be the series of Psycho-Thrillers they produced throughout the 1960s and sporadically into the 1970s. This was Hammer taking sudden inspiration from the massive success of Alfred Hitchcock’s Psycho (1960).

The first of Hammer’s psycho-thrillers was A Taste of Fear/Scream of Fear here and was followed by the likes of Paranoiac (1963), Maniac (1963), Nightmare (1964), Hysteria (1964), The Fanatic/Die, Die, My Darling (1965), The Nanny (1965), Crescendo (1970) and Fear in the Night (1972). Other English companies jumped in with copies of these, including Amicus with The Psychopath (1966), British Lion with Fright (1971), Tyburn with Persecution/The Terror of Sheba (1974) plus the independent Dark Places (1973). The majority of these were from the typewriter of Jimmy Sangster who had also written the screenplays for The Curse of Frankenstein, The Horror of Dracula and many of Hammer’s other early successes. (See below for Jimmy Sangster’s other films).

A Taste of Fear/Scream of Fear was a departure from what audiences were becoming used to as the Hammer style at the time. Aside from the fact that it was the first of Hammer’s horror films to take place in a contemporary setting, it was the first film Hammer had made in black-and-white since they came to fame, copying Hitchcock who had shot Psycho in black-and-white (although many of Hammer’s earlier works, in particular the first two Quatermass films, had been in black-and-white). Furthermore, Seth Holt directs with a stark emphasis on the edgy psychological tension that Hitchcock did do well as opposed to the stately Gothic effects of Terence Fisher – indeed, there are times you could say that A Taste of Fear/Scream of Fear feels more like a film noir than Psycho ever did. In effect, it was Hammer throwing out everything that had been the staple of their horror revival.

Psycho and its numerous American copies, such as the films of William Castle, took a dubious basis in Freudian traumas and confused gender identity – most are essentially what we would call serial killer stories today. However, such a mass of tortured psychology and sexual revulsion never featured in any of Hammer’s psycho-thrillers. Rather Hammer seemed to draw from the model created by the French Les Diaboliques (1955) – and before that the silent The Cat and the Canary (1927) – and its contortedly improbable set of events created to drive someone crazy/kill them, usually in order to obtain an inheritance. The drawback of the Les Diaboliques model is that Jimmy Sangster’s plots were never that good when you examined them in terms of reverse logic ie. they seemed based around improbable set-ups and whopping coincidences once their surprises had been revealed.

Seth Holt manages a number of effective jolts – the discovery of the body at the bottom of the pool, Susan Strasberg abandoned in a car heading towards a cliff (and the string of twists that come after that point). While most of the Hammer psycho-thrillers and Jimmy Sangster’s scripts for these were founded in absurdly complicated and implausible set-ups, the script here holds a couple of highly effective twists at the end that never run too far into the realms of contrived improbability. (Not to mention is one of the few times in which Christopher Lee turns out not to be the sinister villain after all). Susan Strasberg (daughter of the famed acting teacher Lee Strasberg) makes for a convincingly sympathetic heroine.

Seth Holt was a promising director in Anglo-horror. Working as an editor at the celebrated Ealing Studios throughout the 1940s, he made his debut for them with the thriller Nowhere to Go (1958) and was then hired by Hammer to make A Taste of Fear. He only ever directed four other films, including the thriller Station Six Sahara (1962) and Amicus’s non-genre spy film Danger Route (1967), as well as some tv episodes. For Hammer, Holt also made the Jimmy Sangster scripted psycho-thriller The Nanny (1965) and Blood from the Mummy’s Tomb (1971), which was completed by another director after he unexpectedly died of heart-failure in 1971 at the age of 47.