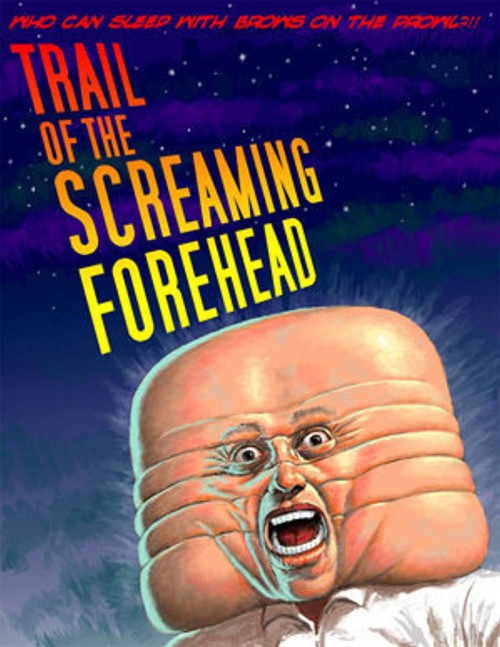 In Longhead Bay, the local guesthouse owner Amos goes for a walk and comes across an ambulatory forehead of alien origin. The forehead attaches itself to Amos and he returns acting strangely. He affects other people and the alien foreheads quickly spread all around the town. Meanwhile, at the Institute for Brain Studying, Dr Sheila Bexter advances the theory that the forehead rather than the brain is the seat of human intelligence but is ridiculed by her superior because she is a woman. Her colleague Dr Philip Latham steps up to offer Sheila help in her research. Sheila agrees to use Philip as an experimental subject. She injects him with foreheadrazine, which expands his forehead and will make him the most intelligent in the world. During the course of the experiment, the two become attracted, causing Philip to stray from his wife Mary. In order to obtain enough foreheads for the experiment, Sheila must illicitly employ Nick Vassidine who makes plans to rob a shipment of corpses. At the same time, sailors Big Dan Frater and Dutch ‘The Swede’ Annacrombie have signed into Amos’s boarding house and noticed that something strange is going on. Joined by local librarian Millie Healey, they attempt to stop the alien foreheads as they overrun the town.

Trail of the Screaming Forehead was the second film from writer/director Larry Blamire. Blamire’s first film was The Lost Skeleton of Cadavra (2001) which, just like this, is a parody of 1950s B sf/horror movies, all conducted in a deadpan parody of the era’s purple prose. Blamire has subsequently made Dark and Stormy Night (2009), which parodies Old Dark House films, and the inevitable The Lost Skeleton Returns Again (2009), as well as co-wrote The Witch Files (2018). Blamire works with the same ensemble of actors in his films, which includes Fay Masterson, Andrew Parks, Brian Howe, Susan McConnell, Dan Conroy, Robert Deveau, H.M. Wynant, Daniel Roebuck and Jennifer Blaire (Blamire’s wife). Blamire himself can be seen in the film in the role of the bar owner/shady underworld dealer Nick Vassidine.

Trail of the Screaming Forehead comes in a similar style to Larry Blamire’s other films. In this case it is a parody of 1950s science-fiction films, specifically the alien body snatchers fad of Invasion of the Body Snatchers (1956) and its ilk, with some mad scientist experiments also thrown into the mix. The male scientist (Andrew Parks) is a straight-faced parody of a 1950s family man, while the female scientist (Fay Masterson) is naturally dismissed by her superiors because she is a woman. The alien body snatchers hop, slither and suck out emotions, while the heroic camp is represented by two absurdly cheerful sailors and a nerdy librarian. When the two scientists kiss, they place their cheeks together and turn their faces towards the camera just like romantic couples in 1940s films, and so on.

Throughout the 1980s and into the 90s, there was a vogue for deliberately bad parodies of 1950s sf movies – see the likes of Attack of the Killer Tomatoes (1978), Big Meat Eater (1983), Revenge of the Teenage Vixens from Outer Space (1986), Amazon Women on the Moon (1987), Earth Girls Are Easy (1989), Lobster Man from Mars (1989), Strangest Dreams: Invasion of the Space Preachers (1990), even The Rocky Horror Picture Show (1975). In this micro-genre, the film that Trail of the Screaming Forehead resembles the most is Top of the Food Chain/Invasion! (1999), which comes with exactly the same wittily deadpan approach.

One of the most amusing aspects about Trail of the Screaming Forehead (and Larry Blamire’s films) is the dialogue. It is as though Blamire has taken the colloquial prose from a cheap 1940s pulp novel (or 1950s SF film) and put it through a blender that feeds back on itself. The nearest comparison one can make is to the dialogue in the films/plays of David Mamet. This may seem an odd comparison but Mamet writes the same cornball adverb and archaic colloquialism-heavy dialogue and gives it a rhythm that comes as though actors are often intoning specifically written prose from a bygone era.

Trail of the Screaming Forehead has a wilful silliness to it that is highly appealing. Sometimes it al feels in danger of being a little too silly for its own good but it mostly comes out winningly. There are no more hilarious sights than the scene where priest James Karen proposes to the others that they adopt a disguise to hide their foreheads – and then produces a series of pillbox hats for them all to wear.

The climax of the film features Alison Martin and the sailors realising that the foreheads are susceptible to vibration and decking themselves out with garlands of bells and succeeding in driving the foreheads off – only for them to return wearing earplugs. And for Brian Rowe to then deal with the advance by quickly putting a coin into a payphone and calling the phone opposite – only for the aliens to deal with this newly introduced vibration by simply picking up the phone, ending with Rowe trying to fend off the advancing mob by putting in another coin but not having any and Alison Martin crawling along trying to escape the foreheads while holding out a bill and asking “Anyone got change?” Sublimely silly.

The performances come perfectly in tune with the tone of the film. It is very easy for this kind of parody to topple into clumsiness – it may well be that Larry Blamire works with a regular cast because they are the few that ‘get’ his tone. The two scene-stealers of the film are British actress Fay Masterson who slinks her way across screen with barely suppressed passion as the woman scientist and Blamire’s wife Jennifer Blaire who gives an hilarious performance as the barroom strumpet (and even gets to sing a version of the title song at one point).

The film is tricked out with requisite cameos from Dick Miller and Kevin McCarthy, actors from the 1950s originals whose presence was mandatory in any 80s/90s B movie genre parody, as well as Daniel Roebuck and James Karen who appeared in a good many other B movies of the 80s/90s. The film also comes ‘presented’ by Ray Harryhausen, the famous (now retired) stop motion animator responsible for classics like The 7th Voyage of Sinbad (1958), Jason and the Argonauts (1963), as well as original 1950s alien invader films like Earth Vs the Flying Saucers (1956) and 20 Million Miles to Earth (1957). Blamire even has celebrated jazz quartet The Manhattan Transfer singing the title song.