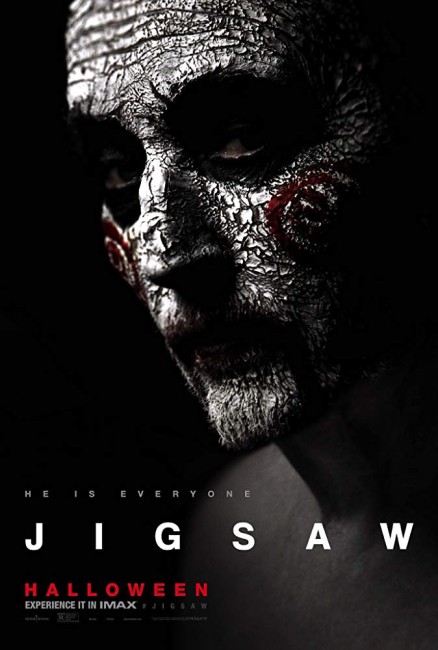 A murdered body is brought into the lab of pathologist Logan Nelson. On examination, he finds a flash drive hidden inside the body with a recording purportedly made by Jigsaw, despite the fact that John Kramer died ten years ago. DNA testing reveals Kramer’s blood present, leaving the police puzzling how Kramer could still be alive. Meanwhile, five people wake up imprisoned in a facility where they are placed through a series of deadly traps designed to make them confess the crimes of which they are guilty. As the police find more bodies left by the new Jigsaw with notes taunting them, suspicion falls onto Logan’s assistant Eleanor Bonneville who has created a secret project where she has rebuilt Jigsaw’s traps and equally on investigating detective Halloran.

The Saw films, love them or hate them, were the horror franchise of the late 2000s. The series began with Saw (2004), a superbly torturous and twisty thriller from debuting director James Wan. Made on a minimal budget, this was a big success and launched a series of sequels – Saw II (2005), Saw III (2006), Saw IV (2007), Saw V (2008), Saw VI (2009) and Saw 3D (2010). Under other directors, the series went from torturous suspense to an emphasis on outright torture presented in as nasty and unpleasant an extreme as possible. One welcomed the end of the Saw series – like the Police Academy films, they should have been viewed as a product of their era and the natural end of that era be celebrated. Whether we asked for it not, seven years after the last released sequel, we get a revival of the series here, although from the fairly indifferent box-office that Jigsaw received one suspects we are not sitting on the onset of a revival of the franchise.

The promising upside of Jigsaw is that it has some halfway reasonable directors assigned to it. Aside from James Wan who made his debut with the first Saw and has gone onto a much higher profile, all of the other Saw sequels were handled by undistinguished genre hacks like Darren Lynn Bousman and Kevin Greutert. By contrast, Jigsaw comes from Australia’s Spierig Brothers, who are the sole ones among the Saw sequel directors who have actually made some good films elsewhere with the strange homemade zombie/alien abduction film Undead (2003), the fascinating vampire film Daybreakers (2009) to the excellent Robert Heinlein-adapted time paradox film Predestination (2014) and the real-life haunted house story Winchester (2018).

With Jigsaw, there is the hope that the Spierig Brothers would do something that elevates the Saw series, maybe even take it back towards the torturous suspense what James Wan gave the first film rather than indulge in Torture Porn extremes. Unfortunately this doesn’t quite turn out to be the case. We get, as fairly much expected, a run through of all the elements of the other Saw films – a group of people imprisoned and required to engage in torturous self-mutilation to affect their escape; Tobin Bell still alive, despite Jigsaw having been killed off four films ago, pronouncing judgement on them for their sins.

Jigsaw does return to what we had in Saw and some of the sequels – of having two parallel plots with one that follows the victims as they make their way through Jigsaw’s traps; the other following a group of detectives as they try to piece together the game that Jigsaw is playing. It is here that Jigsaw starts to work. The police procedural is standard stuff – where one suspect has for improbable reasons hired studio space and recreated most of Jigsaw’s torture instruments (we are never told why).

On the other hand, the end of the film does suddenly make this interesting. The revelation of the identity of the Jigsaw acolyte does come as a considerable left field surprise. So too is the twist that reveals that much of what we have been watching is a deliberate messing with our sense of time (and in ways that does not contradict the series continuity). It is this that make Jigsaw at least more watchable than its ilk.