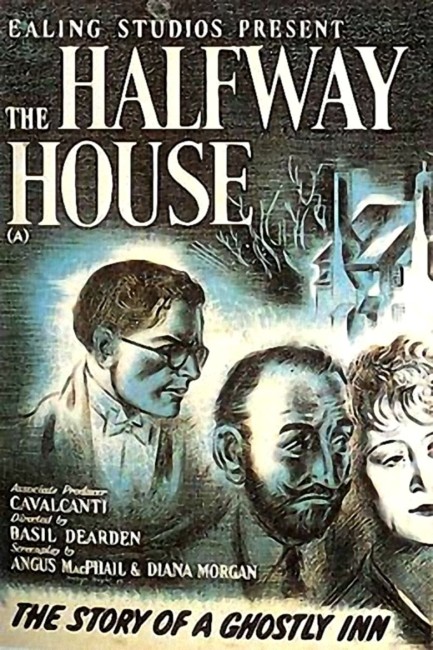 Various people gather at the Halfway House inn in rural Wales. These include David Davies, a famous conductor who has been pushing his flagging health to the point it is killing him; Richard and Jill French who have decided to divorce but whose daughter Joanna has contrived to get them both there in the hopes of reuniting them; Captain Fortescue, a forger just released following a jail term; Frenchwoman Alice Meadows who is grieving for her son Jim who was killed in the War and has turned to spiritualism; her husband Harry, a sea captain who has been disgraced because he abandoned his ship; the war profiteer William Oakley; and an engaged couple Terence and Margaret who are being split over Terence’s refusal to compromise his native Ireland’s neutrality during the War. As they stay there, the innkeeper Rhys and his daughter Gwyneth come to have a strange effect over them, bringing out and offering clarity to their problems. The group come to realize that both the innkeeper and his daughter are ghosts and that the inn exists one year in the past. They also come to realize that the Blitz bombing that burned the inn to the ground is about to be replayed.

The Halfway House was one of the films to emerge from England’s legendary Ealing Studios. Ealing became better known after the War, most notably with comedies like Kind Hearts and Coronets (1949), The Lavender Hill Mob (1951) and The Ladykillers (1955). Surprisingly, The Halfway House is rarely mentioned in genre overviews of the era, although is a considerable and excellent ghost story.

Were it to have come out 30 years later The Halfway House could almost be a Robert Altman film (although it lacks anything of Altman’s dry irony) – the model at the time would have fairly much been Grand Hotel (1932). It seems to start out as an amiable character comedy with some amusing scenes involving in particular the schemings of young Sally Ann Howes in trying to reunite her separating parents. At its most wackily screwball, there is the image of Richard Bird in the bathroom with Valerie White over his knee spanking her with a loofah.

Where the film gains its strengths is its subtle move from what initially seems light comedy in its first half to surprisingly deep and penetrating character analysis in its second half. The seance scene where the perpetually haunted atmosphere of the inn itself and Francoise Rosay’s mediumistic abilities come together to suggest that there is something genuinely supernatural happening before we are jolted out of it by a mundane revelation is superbly accomplished, as is the scene’s segue into a forcible moment of character definition.

The way in which each of the characters are brought out is very well done. Although it is amusing to note how much so the character crises reflect then contemporary British Wartime morality – where one character is persuaded to see the evils of profiteering, where an Irishman is persuaded to give up his country’s political neutrality in the conflict and enlist, and where another woman is persuaded to come to terms with instead of avoid the death of her son. The film gets some nice performances, especially from the gruff Guy Middleton and the wonderfully dignified Mervyn Johns.

The fantastic element is often subtly observed – the eerie appearance of the hotel seemingly out of nowhere amid the placid valley and of Mervyn Johns’s surprise initial entrance. There is the unusual effect of Mervyn and Glynis Johns casting no shadows when they move (although if you watch the film closely on frame advance you will see a number of occasions where they do).

What is notable about the film is its contrast to the American fantasy films of the Wartime era, the likes of Here Comes Mr Jordan (1941), A Guy Named Joe (1943) and Heaven Can Wait (1943), which seemed almost frantic in their need to demonstrate to audiences the existence of an afterlife and offer ameliorating comfort. The British were closer to the War than the Americans were and suffered greater casualties both on the front and at home, yet this holds oddly the converse of the American afterlife fantasies – while the American films offer gentle assurance of the afterlife, The Halfway House‘s message is to accept loss, not to deny it.