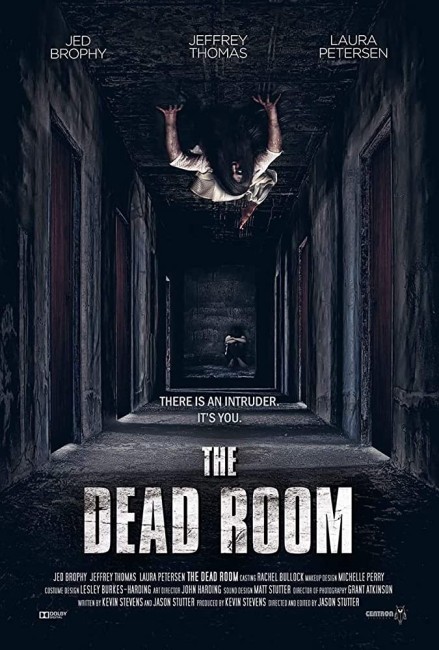 A three-person team go to conduct an investigation into a reputedly haunted farmhouse. The group consists of the highly sceptical Cameron, the agnostic Liam and the medium Holly. As they settle in, the house is shaken and the front door constantly opens of its own accord. Cameron is insistent that all of this can be logically explained. Holly believes that she can sense the disembodied shape of a large man in the house. The attacks become more menacing in nature. Cameron is certain that he can remove the ghostly entity with the use of a low frequency sound wave device.

The Dead Room was the fifth film for New Zealand director Jason Stutter. Stutter debuted with the almost culty Tongan Ninja (2002) and has also made the horror comedy Diagnosis: Death (2009), the Ronald Hugh Morrieson adaptation Predicament (2010) and the comedy Edwin: My Life as a Koont (2013).

Here Stutter ventures into the ghost story, a topic that has never had particular success on New Zealand screens – look at efforts such as Mr Wrong (1985), The Returning (1991), Ghost Bride (2013) and the possible exception of Housebound (2014). Even Peter Jackson flopped when he tried to make a ghost comedy with The Frighteners (1996).

Jason Stutter’s venture into the ghost story feels like he is treading very familiar ground. The plot of the paranormal investigators investigating a reputedly haunted house has been done to death in the last few years by in particular the Found Footage film. Stutter has also chosen to set the film in a regular Kiwi farmhouse (and from the lack of a production designer’s credit, it would seem to be a real one too) meaning that the usual location of a big old mansion dripping with atmosphere that we get in most ghost stories is replaced with a slightly rundown house that seems to consist of a hallway about fifty feet long with a regular front door that keeps opening of its own accord, plus a couple of other nondescript rooms.

For a long time, The Dead Room never seems to go anywhere. There are one or two minor happenings but not much. This is also a haunted house story that is notedly dependent on physical effects. Stutter generates some okay atmosphere but never anything that makes you sit upright or on the edge of your seat.

The film eventually gets itself together in the final act where Stutter throws everything in the house at the three cast members. The result feels like a placid middle-of-the-road entry that suddenly tries to become a Halloween haunted house – all shock jump effects with cops and furniture being thrown around the walls – where Stutter belatedly tries to generate some effect but with minimal results.