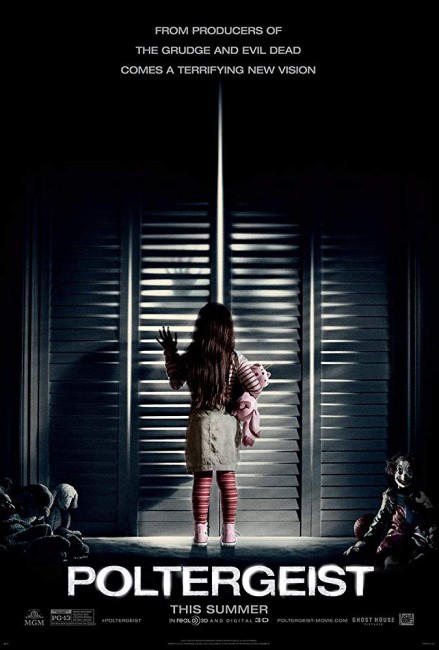 Eric and Amy Bowen and their three children move into a new house. Eric has been laid off work and the house is all they can afford, even though it has some problems. Soon after they move in, the children start to report spooky phenomena. This soon turns malicious. During a storm, young Madison disappears through a gateway that opens up in the closet and her disembodied voice can be heard coming through the television. Eric and Amy bring in parapsychologists from the university and then tv ghostbuster Carrigan Burke. Together they determine that Madison has been snatched into the beyond by disembodied souls that want to use her special gifts as a gateway back into this world.

I am old enough to have seen the original Poltergeist (1982) in theatres. For my young mind, it was a revelatory experience – genuinely spooky, awe-inspiring in the right places. I didn’t have too big a body of other ghost stories to hold it up to at that point, nevertheless successive re-viewings have shown it to be a classic in every regard. It was a film where everything from the direction to a standout ensemble cast seemed to hit just the right note. It was sequelised twice as the disappointing Poltergeist II: The Other Side (1986) and the slightly more interesting Poltergeist III (1988), neither of which came anywhere near the original.

I had hope for the remake of Poltergeist. It was directed by Gil Kenan who first appeared with the fine performance-capture animated Monster House (2006) and then ventured into live-action with the well worthwhile Young Adult film City of Ember (2008) and subsequrnt to this A Boy Called Christmas (2021), as well as to co-write Ghostbusters: Afterlife (2021). The remake also comes produced by the Ghost House Pictures production company of Sam Raimi, which has also been responsible for a bunch of genre films such as The Grudge (2004), Boogeyman (2005), The Messengers (2007), Rise (2007), 30 Days of Night (2007), Drag Me to Hell (2009), The Possession (2012), the remake of Evil Dead (2013), Don’t Breathe (2016) and The Unholy (2021). Ghost House co-produce with the Vertigo Entertainment production company of Roy Lee who has been behind the spate of English-language remakes of Asian horror films in recent years.

Alas, Poltergeist 2015 sets in with the same feeling of ennui that you get with all the other remakes. It hits most of the beats from the original and sets out to do all of them bigger (and moreover delivers them in 3D), yet singularly fails to engender anything of the haunted mood that the original held. The clown doll and the sinister tree in the backyard are back and far more active; there is Carol-Anne/Madison’s hand pressed up against the tv but now there is a whole host of hands. There is cupboard gateway into the afterlife and all the talking of “going into the light” but here various people (and the camera) actually venture into the afterlife beyond the cupboard door and we see them struggle to rescue Kennedi Clements from the clutches of the sinister forces there.

There are also a number of scenes that the remake has trimmed – no furniture stacked in the kitchen, nobody being pushed around the ceiling of the bedroom, while the scene where the parapsychologists enter the room of rotating objects has been downsized to merely a levitating child’s tea set. Nor is there the eerie scene where the group sit up at night and watch the spirits pass through the house. There is also a downsized version of Craig T. Nelson’s monster out of the tequila bottle from Poltergeist II: The Other Side where Sam Rockwell drinks from a whiskey bottle and coughs up worms.

The Bowens also go from baby boomers in Reaganite America to a financially strained family of the post-2008 Recession era where Sam Rockwell is out of work and the house is not a new development but the only one that they are able to buy cheaply and comes with maintenance issues.

The one thing you do appreciate is that David Lindsay-Abaire’s screenplay tries to make more sense out of the often random hodgepodge of ideas behind the original screenplay. We get the same explanation about the house built on a graveyard where only the headstones were moved, although eliminated is the American Indian burial ground double-explanation. Abaire also adds a few more explanations such as giving the spirits in the beyond a reason why they want Carol-Anne/Madison – she, like Danny in The Shining (1977), has a psychic gift they want in order to regain life.

The other major disappointment is no Tangina Barrons. Zelda Rubinstein’s performance in the role was sensational and her replacement here with Jared Harris, while effective enough in its own right, is a weaker substitute (the film also adds a past history between him and Jane Adams’ parapsychologist to no real point).

A few modernisations have crept in – the beyond is ventured into with the trendy new toy of a drone, Carol-Anne/Madison sits in front of and talks to a widescreen tv and Jared Harris’s psychic now almost mandatorily comes with his own ghostbuster reality tv show (although this is a touch that has become well over-used in modern ghost stories).

Poltergeist is not badly made. It is just nothing remarkable. On its own, some of the atmosphere might have been okay and it made for a passable ghost story. On the other hand, there is so little of distinction that it falls down somewhere around the level of another formula contemporary ghost story such as The Haunting in Connecticut (2009), The Apparition (2012), The Possession or Ouija (2014). Coming with the pedigree of the Poltergeist series, the result is a heavy disappointment on not terribly high expectations.