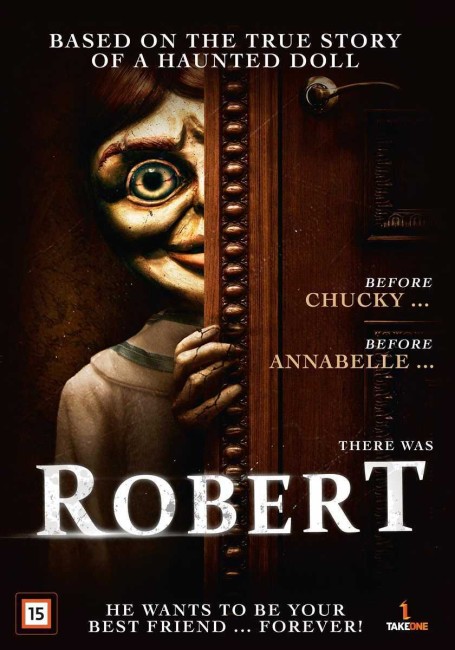 Lawyer Paul Otto and his wife Jenny, an artist, decide that Agatha, the nanny to their son Gene, is getting past it and make the decision to dismiss her. Agatha takes the decision badly and promises this will not be the end of it. She departs, leaving Gene with a hideous doll called Robert. Jenny soon becomes concerned about the relationship between Gene and Robert. Gene insists that Robert is alive and that it destroyed one of Jenny’s paintings and wrote ‘die’ on her bathroom mirror. Jenny soon comes to believe that Robert is alive and was responsible for pushing the cleaner Martha down the stairs and killing the babysitter Marcie. However, with no proof of this, Paul thinks Jenny’s mental health is playing up again.

Robert the Doll was released eleven months after Annabelle (2014), which was spun off around the evil doll seen in the background of The Conjuring (2013) and led to two subsequent sequels. There is the clear influence of Annabelle on Robert – both films feature a malevolent doll and both make claim to be based on a true-life doll. Here the film is derived from Robert, a doll that had the purported ability to come to life and move, which belonged to Robert Otto, an artist who lived in Key West, Florida between the 1930s and his death in 1974. The doll is currently on display in the Fort East Martello Museum in Key West.

As the opening credits announce, this is a film based on the Robert doll, although the connection to the real Robert doll is negligible. It should be noted that while Robert Otto lived in Florida between the 1930s and 70s, the location of the supposed ‘true story’ has been moved to contemporary England. (See Films That Make Dubious Claims to Be Based on True Stories). Robert the Doll proved surprisingly popular and Andrew Jones has made four sequels to date with The Curse of Robert the Doll (2016), The Legend of Robert the Doll (2018) and Robert Reborn (2019).

The main issue in comparison to Annabelle and other evil doll films is that Robert looks suitably evil but is just a crudely created lump of plastic with a scrawny neck that seems out of proportion to its body. It is also is immobile – indeed, you realise at the end of the film that there have only been 2-3 shots throughout where we actually see Robert move in any way.

The film never particularly travels in any adventurous places. There’s the well-worn cliche plot of the wife with the history of mental illness and the husband who is constantly dismissive of her suspicions that something is happening. There are assorted deaths of supplemental characters – the maid, the babysitter. On the plus hand, Andrew Jones seems to be improving as a director. Robert the Doll is never more than an average film but Jones at least has a good sense of his characters and develops some passable tension out during the show. He certainly does these things better than the film’s model Annabelle did. The only failing is an anticlimactic ending where the doll is defeated without any real struggle.