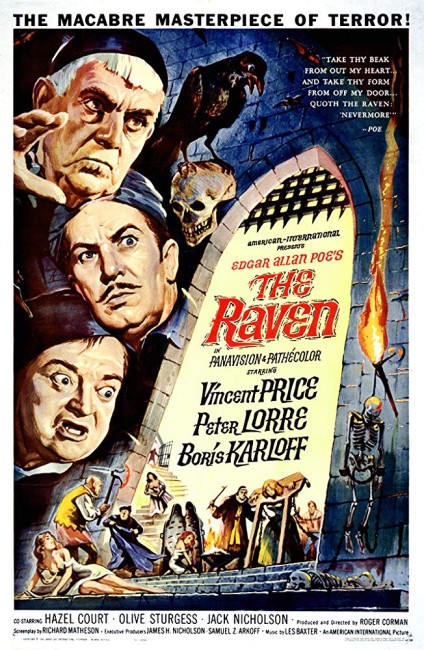 The 15th Century. A raven appears at the window of magician Erasmus Craven, startling him by asking for a glass of wine. It then recites a list of thaumaturgical compounds for returning it to human form. Craven makes up the potion and the raven turns into his colleague Dr Bedlo. Bedlo explains how he was transformed into a raven after insulting Dr Scarabus, head of the Brotherhood of Magicians, at a dinner party. Bedlo then sees a picture of Craven’s late wife Lenore and insists that he saw her alive at Scarabus’s place. Craven immediately races there, only to fall into a trap laid by Scarabus.

By the time they came to making The Raven, Roger Corman and his in-house team – Vincent Price, screenwriter Richard Matheson, cinematographer Floyd Crosby, musician Les Baxter and production designer Daniel Haller – had made four other Edgar Allan Poe films. (See below for other titles).

By this point, clearly the desire for some variation on the sonorous gloom of the previous entries was getting to Corman and co. The tongue-in-cheek telling of The Black Cat in the preceding entry Tales of Terror (1962) had been popular and so reuniting the two stars of The Black Cat – Vincent Price and Peter Lorre – Roger Corman et al decided to play The Raven wholly as a spoof. Certainly, the connection with Edgar Allan Poe’s 1845 poem, which consists of no more than a narrator who is interrupted by an ominous raven as he mourns his lost love Lenore, is strained to the point of non-existence. In fact, the film is so far removed from Poe that the raven doesn’t even get to qouth “nevermore”.

The tongue-in-cheek playing is certainly amusing. Richard Matheson’s script has an amusingly droll dryness to it – Vincent Price shows Peter Lorre his wife’s coffin in the hallway, “I keep her here,” to which Lorre’s reply is a shrug, “Where else?” Or Boris Karloff, as he prepares to torture Olive Sturgess, having the torturer stub a red-hot brand out on his hand and commenting “Hmm, not quite ready yet.”

Vincent Price’s tendency towards fruity overplaying is well suited to the film. Boris Karloff is fine despite being in very poor health at the time – the reason he spends so much of the film seated. Most fun of all is Peter Lorre, who ad libbed most of his performance, charging about like a drunken, neurotic chihuahua. Jack Nicholson, for a career to come that was based on so much over-playing, is amusing to see as a straight man, at which he comes across wooden and flat. Richard Matheson’s plot is too shapeless for The Raven to be a great film but the droll subtleties at least make it an amusing one.

There are several other loosely Poe-based films with the same name, including the earlier The Raven (1915), an Edgar Allan Poe biopic; The Raven (1935), which also starred Boris Karloff as an escaped criminal who is surgically disfigured by Bela Lugosi as a Poe-obsessed madman; Ulli Lommel’s The Raven (2006) and David DeCoteau’s The Raven (2007), both about a mad killer; and The Raven (2012) featuring Poe up against a serial killer.

Roger Corman’s other Edgar Allan Poe films are:- The House of Usher/The Fall of the House of Usher (1960), Pit and the Pendulum (1961), Premature Burial (1962), Tales of Terror (1962), the Poe-titled but H.P. Lovecraft adapted The Haunted Palace (1963), The Masque of the Red Death (1964) and The Tomb of Ligeia (1964). Vincent Price, Peter Lorre, Boris Karloff and most of the production team also teamed up on the Richard Matheson-scripted mortician’s comedy The Comedy of Terrors (1963) under Jacques Tourneur at AIP around the same time, which has a similar tone to The Raven.