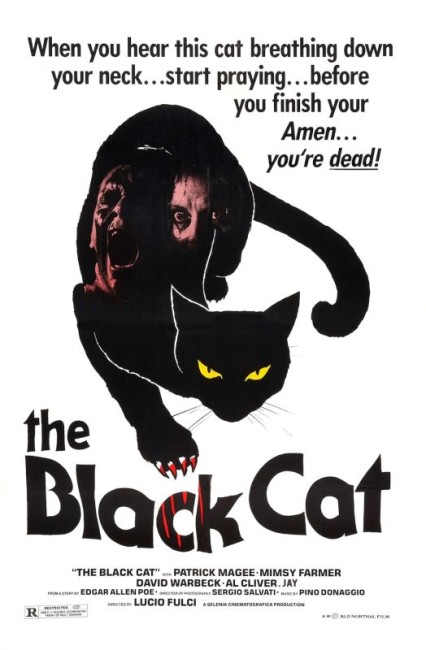 American photographer Jill Travis arrives in a sleepy English country village to conduct a photo essay on graveyards. There she meets Robert Miles who is obsessively taping the noises in the graveyard in the hope of picking up communication from the dead. Both of them are asked to help the police investigate a series of murders. As she investigates, Jill comes to believe that Miles’s black cat is responsible for the deaths.

Italian director Lucio Fulci made a minor reputation for himself around the 1979-81 period with a series of extreme and occasionally stylish gore films such as Zombie – Flesh Eaters (1979), City of the Living Dead/The Gates of Hell (1980), The Beyond (1981) and The House By the Cemetery (1981). Sadly, since that period and until his death in 1996, Fulci’s output, while prolific, became erratic and seemed to lose much of the kick that made his earlier films so sought among gore fiends.

The Black Cat is one of Lucio Fulci’s lesser films – indeed, The Black Cat could be the point from which Fulci’s decline into uninspired hackwork could be measured. Part of the film’s failing is that its title nemesis is not threatening. There are some of Fulci’s trademark gore sequences – a drunk driven by the cat to fall onto spikes, two teenagers bodies gnawed by rats – but they seem half-hearted and lack anything that remains in the imagination like the intestine vomiting or the harrowing pickaxe attack on the person in the coffin in City of the Living Dead, or the eyeball-impaling in Zombie – Flesh Eaters.

Unfortunately, devoid of its gore artistry, there is not much else for a Lucio Fulci film to fall back on. It certainly can’t be the plot. This bears almost nothing in common with the 1843 Edgar Allan Poe story (although in all fairness Poe stories tend to be a single effect and most feature-length Poe adaptations have to invent their own backstory). Fulci and co-writer Biagio Proietti add a stew of elements that include a clairvoyant and clearly demented Patrick Magee taping noises in the graveyard in the hope of picking up communication from the dead.

The black cat, in one fascinatingly unexplored theme – an idea later echoed in Monkey Shines (1988) – functions as Patrick Magee’s repressed id, going out to kill for all the suppressed anger and isolation he feels. The essence of the Edgar Allan Poe Poe story with the black cat giving away the bricked-up location of the murdered body makes a brief, but hardly important, appearance toward the end.