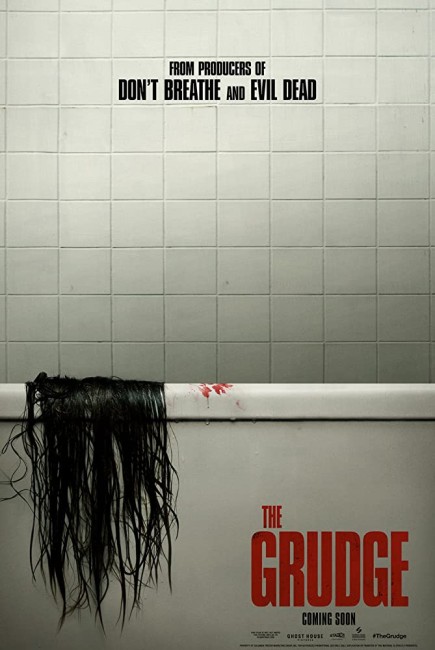 In Cross River, Pennsylvania, police detective Muldoon and her partner Goodman investigate after a badly decayed body is found in a car in the forest. Muldoon sees Goodman react after the body is connected to 44 Reyburn Drive. She finds that this is an address where Goodman and his previous partner had investigated deaths, although Goodman refused to enter the house. She goes to the address and enters to meet a strange old woman. In digging into the case files, Muldoon learns of how a ju-on – a curse that infects everyone it comes in contact with – was brought back from Japan in 2004 and then haunted and killed everyone who was associated with the house, including the aged couple living there, a psychic who visited, the estate agent and Goodman’s partner.

The Ju-on/The Grudge series has led to no less than thirteen films to date. The series started with the tv movie School Ghost Story G (1998). Director Takashi Shimizu expanded on the basics he had created there with the video-released films Ju-on (2000) and Ju-on 2 (2000). This was followed by the theatrically released Ju-on: The Grudge (2003), which became an international hit, and its sequel Ju-on: The Grudge 2 (2003), both from Shimizu. To celebrate the tenth anniversary of the original films, two further films of an hour long apiece were commissioned and released simultaneously with Ju-on: Girl in Black (2009) and Ju-on: Old Lady in White (2009). There was a further theatrically released reboot Ju-on: The Beginning of the End (2014) and its sequel Ju-on: The Final Curse (2015), plus Sadako vs Kayako (2016), a crossover with the Ring series, and the tv series Ju-on: The Curse (2020- ).

In the midst of this, the rights to the Ju-on series were brought up by Sam Raimi’s Ghost House Pictures and it underwent an English-language remake with The Grudge (2004), rewritten to star Sarah Michelle Gellar and with Takashi Shimizu imported as director. This was sufficiently successful that it spawned a theatrically-released sequel The Grudge 2 (2006) and then The Grudge 3 (2009), which was only released to dvd. The Grudge here is a reboot of the US series again produced by Raimi and Ghost House Pictures.

The distributor apparently had little enthusiasm for The Grudge either and dumped it into general theatrical release around the world in the first few days of January 2020. This is a time that most distributors regard as a dead zone – it is just after the cut-off awards season for and the height of the North American winter where few people brave the inclement weather to go to the movies and attendance is usually down.

On the other hand, the film did have a promising director in Nicolas Pesce whose debut film The Eyes of My Mother (2016) I found to be . an extraordinary work that promised great things. In between, Pesce made the quite interesting seeming Piercing (2018) about a man attempting to kill a prostitute. Certainly, based on Pesce’s work on The Eyes of My Mother, I greeted The Grudge with more promise once his name came up on the credits than I had when I sat down to watch.

Pesce co-writes with Jeff Buhler who also wrote the worthwhile likes of the Clive Barker adaptation The Midnight Meat Train (2008) and the amazingly twisted The Prodigy (2019), as well as created/produced the George R.R. Martin adapted tv series Nightflyers (2018) and directed the horror film Insanitarium (2008), although on the less enthusiastic side has also been behind the universally disliked remakes of Jacob’s Ladder (2019) and Pet Sematary (2019), plus Studio 666 (2022).

Nicolas Pesce and Jeff Buhler make an effort to return to the non-linear storytelling that Takashi Shimizu used on the Japanese films. The plot jumps back and forward in time following different people who are affected by the ju-on. The film threads these together in more of a narrative way than Takashi Shimizu ever did and creates an unfolding mystery.

On the other hand, I did have sympathy with the distributor’s dumping of the film. The main problem with it is that Pesce’s pace is slow and uneventful. He shoots much of the film in a honeygolden light, which might be fine for an intimate human drama but seems a world away from the colour palette adopted by any of the other Ju-on/The Grudge films. Things seem to take forever to happen. There are occasionally some interspersed shocks – but far too few of them – and a few more towards the end. Even then Pesce simply does nothing remarkable with any of these, let alone anything that we have not seen in any of a dozen horror films before.