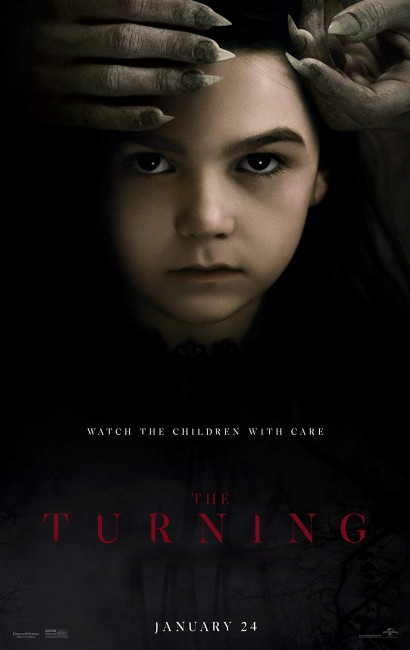 In 1994, Kate Mandell takes up a position as a live-in governess tending young Flora Fairchild. She travels to the large estate and meets Flora and the housekeeper Mrs Grosse. They are later joined by Flora’s older brother Miles after he is expelled from boarding school. Kate finds Miles difficult to deal with, he proving cruel and insolent, playing taunting in his games with her. At the same time, Kate believes there is something haunting the house and that this may be the ghost of the late riding instructor Quint, a brutish man whom Miles regarded as a friend.

Henry James’s The Turn of the Screw (1898) is a literary classic. It is a story that hovers in a delicate state of ambiguity about whether its ghosts are real or whether the governess is projecting her own repressed imaginings onto the children’s actions. Much debate has centred around whether it can be read as a ghost story or as a mundane tale of psychological repression.

This new version of The Turn of the Screw comes from Floria Sigismondi. Born in Italy, Sigismondi was raised in Canada from an early age. She started out as a fashion photographer but broke into directing music video in the early 1990s. There she has made a considerable body of videos for artists as diverse as Christina Aguilera, Fiona Apple, Björk, David Bowie, Leonard Cohen, The Cure, Marilyn Manson, Muse, Katy Perry, Pink, Rihanna, Sigur Ros, Justin Timberlake and The White Stripes, among others. Her music video work and commercials have won multiple awards. Sigismondi had earlier made her feature film debut with the rock music biopic The Runaways (2010).

The Turning originally came with the backing of Steven Spielberg – it is released through DreamWorks SKG. The finished film however spent over a year in limbo, changing its release date. When it finally appeared in February of 2020, it did so with some terrible reviews – even those that went so far as to call it the worst film of the year.

I had mixed feelings about The Turning before sitting down to watch. Firstly, it held a good deal of promise on paper at least. The Turn of the Screw was a classic tale and if done well – see the other abovelisted film versions, especially The Innocents – it has the potential to be a classic. Secondly, there was Floria Sigismondi who had won multiple awards for her work as a video director and seemed a highly promising talent. On the other hand, this had to be balanced out against the film’s terrible reception.

With this in mind, I sat on the fence as the film started. My hackles were raised by seeing that The Turn of the Screw had been updated from its Victorian setting to a contemporary one. (For no clear reason, the film is located in 1994 – as dated by the death of Kurt Cobain, which takes place on the news in the background during the opening scenes). More gratingly, the film has been Americanised, even though it feels a much more British story in its setting – big country estates, upper-class privilege and servants, boarding schools. Given that most of the film was shot at a vast estate in Ireland, it is difficult to see why with very little rewriting the Victorian and British settings could not have been retained.

Even despite this, I gave some hope on the basis of Floria Sigismondi. As the film starts, she certainly makes the estate look visually stunning – long tree-lined driveways, imposing wrought iron gates, conservatories filled with statuary, long ponds with grass paths running down the midst, characters riding through the grounds on horseback, gloomy interiors filled with a great deal of classic artwork and bric-a-brac. It is a film that makes all the right moves from a production design and art direction standpoint. And some of the casting works well – Finn Wolfhard from tv’s Stranger Things (2016- ) takes a turn for the darker and shows some promise as Miles, while Barbara Marten does the stony-faced hired help to perfection while investing the part with some unexpected depths.

However, there comes a point when the film starts to sink. One of the biggest issues I started to have is its treatment of the source material. Henry James wrote a ghost story where the ghosts may only be psychological in nature. In being translated to a visual medium, all of the film versions are forced to offer some manifestation of this, some more subtly than others. On the other hand, you get the impression that Floria Sigismondi and the Hayes’ brothers (see below) are entirely oblivious to this.

Fairly much from as soon as Mackenzie Davis settles into the mansion, we are getting ghostly apparitions appearing at windows or in mirrors, figures flitting through in the background and the like. A number of these are definitely more physical appearances than they ever seem possibly psychological in nature – a scene where the head of a mannequin turns after Mackenzie Davis leaves the room, while the climactic scenes make everything overt in having the house under attack by ghostly forces. The most absurd of these – the most absurd of any filmed version of The Turn of the Screw in fact – is a scene where Mackenzie Davis has phantom hands grabbing her all over. The film even throws in multiple dream jump sequences – as I have repeatedly said, when a horror film has to insert these to jolt an audience, it is a signal it is not getting them elsewhere.

Certainly, there are some scenes that head in the direction of the psychological explanation – one where the children play a prank and make Mackenzie Davis think there is a figure in the swimming pool, others where her certainty in something ghostly is ridiculed and mundane explanations offered. However, there is no sense throughout that the film is sitting on a fence and leaving us unsure as to whether the manifestations are real or all in Mackenzie Davis’s head.

This is a film that has stripped The Turn of the Screw of anything ambiguous and turned it into just another ghost story set in a big old gloomy mansion. In other words, it is now simply a run of the mill film about a haunted house, not something where the manifestations may all be merely psychological. Alas, with the story having been brought down to the level of every other ghost story out there, Floria Sigismondi seems to be straining to provide something scary.

It is at the confusing and abrupt end that the film entirely falls apart. [PLOT SPOILERS] Mackenzie Davis attempts to flee with the children as the house comes under ghostly assault. We then confusingly cut back to earlier where we now see that everything could well be in Mackenzie Davis’s head. If this is the film’s attempts to give us competing endings that vie between supernatural and psychological explanations, it seems ham-fisted. It feels more like a bad attempt to shoehorn Henry James’s ambiguities into making everything into another The Sixth Sense (1999)-styled left field twist reversal ending, of which the ghost story has seen overly much in the last few years. In the final scene, Mackenzie Davis ends up in the asylum where her mother (Joely Richardson) was – and may quite possibly be an inmate herself. She goes over to see her mother and as she turns around, we cut to Mackenzie’s shocked reaction and then to black without ever seeing who is there. It is an ending that is confusing beyond frustrating.