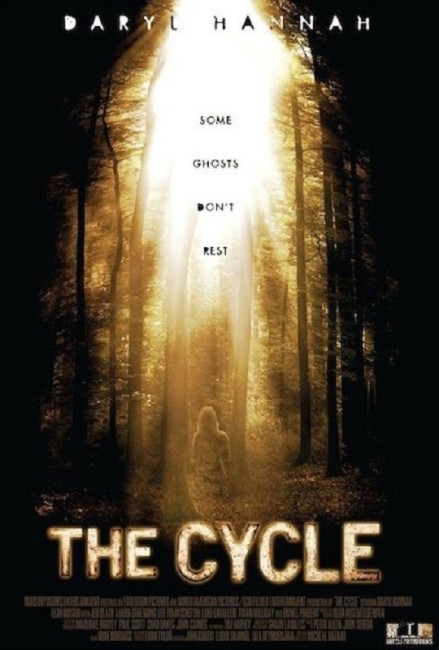 aka The Devil’s Ground

Carrie Mitchel is driving through Pennsylvania en route to Bangor, Maine, when a girl runs out onto the road in front of her, begging for help. Carrie offers the girl, Amy Singer, a ride and listens to her story. Amy was one of a five-person crew sent by the university to conduct an environmental assessment report in the area known as The Devil’s Playground near the town of Bradford. Instead, they were attacked and pursued through the woods by a hulking figure who kept their face hidden behind a tattered ski mask.

The Cycle was the sixth directorial film for Canadian director Micheal Bafaro. After writing a few screenplays, Bafaro made his directorial debut with the low-budget heist film For a Few Lousy Dollars (1998). Bafaro broached genre material with the science-fiction film Sleeping Dogs (1998) and then discovered the horror genre with The Barber (2002). He has remained with horror ever since, turning out the likes of 11: 11 (2004), Cranes (2006), Rise of the Damned (2011), Embedded (2012), Wrecker (2015) and Amber’s Descent (2020).

I have not liked any of Micheal Bafaro’s films. They seem unoriginal and directed by constant genre cliches. Of these, I suppose The Cycle remains the best I have seen so far. Even so, it emerges to no more than a routine competence, before eventually sliding off the edge of the cliff in a lame ending (more on that below).

When we get to the meat of the film, it transpires that all that Bafaro has set out to do is offer up a copy of The Texas Chain Saw Massacre (1974). As in the original, we have a group of young people heading out into the backwoods where they are then pursued by a hulking, inarticulate figure who keeps his malformed features hidden behind a mask. (The masked psycho is even named Tobey in homage to Texas Chain Saw director Tobe Hooper). As with the original, we also realise that his family is in on this and that they all have malformities due to nuclear waste that was dumped in the area – an explanation taken from the then-recent remake of The Hills Have Eyes (2006).

Michael Bafaro generates an adequate level of tension out of the pursuit. Even so, many aspects come with constant overkill – like Tan Holliday’s overwrought Southern accent and constant spitting to tell us in caps and underlined that yeah, he is a backwoods hick, while the constant cutaway shots to crows lurking becomes so repetitive that it starts to become parody.

However, the film goes off the rails right at the end with its twist that reveals that [PLOT SPOILERS] fleeing victim Leah Gibson, who has narrated the entire story to Darryl Hannah who picked her up on the roadside, is actually a ghost. Thereafter the whole film collapses into a ludicrous house of cards that reveals that everything that happened, including Darryl’s dead husband travelling along the same road, her being there now and pulling up at the gas station, all fits together into an elaborately contrived ghostly retribution scheme.