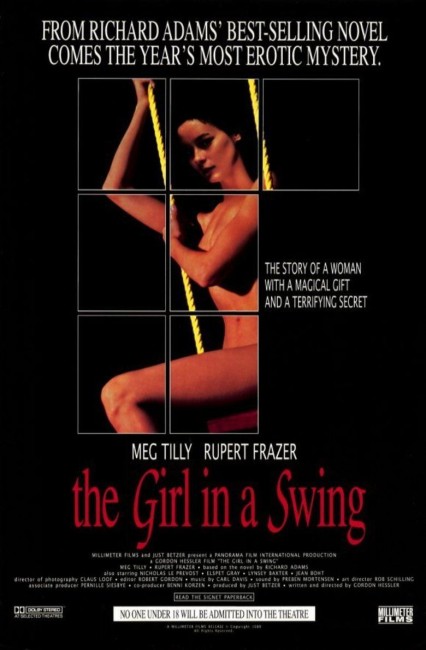 While on a business trip to Copenhagen, antique dealer Alan Desland meets and falls in love with German secretary Karin Forster. They marry and return to England. Soon after however, a terrible secret from her past returns to haunt her.

The Girl in a Swing is a film that is an interesting puzzle. It was directed by Gordon Hessler who rose out of the Anglo-horror cycle in the late 1960s and peaked with the classic fantasy The Golden Voyage of Sinbad (1973). (See below for Gordon Hessler’s other films). The film is based on a 1980 novel by Richard Adams, best known as the author of Watership Down (1978).

The Girl in a Swing is constructed as an old-fashioned ghost story. It is one where Gordon Hessler takes his time to build to the scares. The film is told through the characters and here the romance is written and played with an uncommon degree of care. (Although Meg Tilly’s soft-voiced mannerisms and German accent do seem terribly affected). When the elements of the supernatural do eventually arrive, Hessler produces a series of eerie scares with considerable subtlety (much more so than was common in the Anglo-horror cycle) – the crying child’s voice that starts on the end of a phone and comes closer to the house, of things that momentarily seem to be other than they are, and the genuinely spooky image at the end of the body that floats out of the sea carried on the waves.

That said, The Girl in a Swing is also an extraordinarily frustrating film. It fails to adequately explain what it is about. It appears that it is something about a supernatural retribution for Meg Tilly having drowned her child at birth, but nothing is ever particularly clear about what happened. At one point, a love scene seems to bizarrely suggest that Meg Tilly is an incarnation of the statuette The Girl on a Swing. However, nothing is clearly spelt out at all.

Gordon Hessler was unhappy with the American release of The Girl in a Swing, which cut his original two hour plus print down and added narration to explain the plot more. Even after having seeing the full version of the film here, one has a sneaking suspicion that this might have been one of the few occasions when a distributor’s interference with a film was justified. The film was considered a box-office failure.