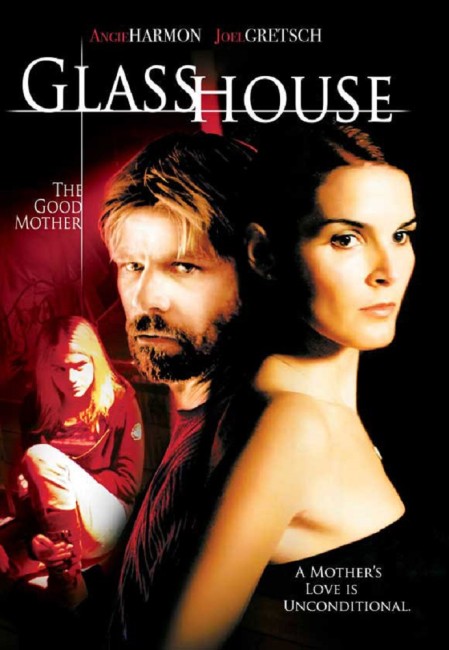 Teenager Abby Snow and her younger brother Ethan are orphans following the death of their parents. Unable to support them, their older brother Ben allows them to be adopted by foster parents Raymond and Eve Goode. They are taken to live in the Goode’s palatial house. Abby soon discovers that the Goodes are very controlling. They refuse to allow either of them to go out of doors. After Abby speaks up, Eve starts to cruelly punish her. Abby comes to believe that Eve suffers from Munchausen’s By Proxy Syndrome, that she has killed her own son and the other children they fostered, and that she is now poisoning Ethan.

Glass House: The Good Mother is a dvd-released sequel to The Glass House (2001). The Glass House was a modestly effective, although hardly world-shattering, cinematically released thriller about two children being held captive by foster parents who appeared intent on killing them off to get their hands on the children’s inheritance.

The Glass House is not exactly a film that leads itself to a sequel – the two evil foster parents were killed off at the end of the first film and the idea of a story based around the same two children then being adopted by two further sinister parents strains credibility in a major way. Perhaps in recognition of this, The Good Mother takes the basics of The Glass House – an orphaned teenage girl and her younger brother, two perfect seeming foster parents who quickly turn sinister, a big designer California mansion – and casts them with new actors and characters, retelling the same story in slightly different ways.

Visually and in terms of the bland piano score tinkling away in the background, Glass House: The Good Mother has the feel of being no more than throwaway cable/dvd filler. On the other, it is not as eminently forgettable as it might seem. Director Steve Antin has some occasional style. He turns The Good Mother into something akin to a psycho version of Desperate Housewives (2004-12).

The film is at its best in the scenes exploring the polished world the Goodes live in and what it masks beneath its surface. Antin makes effective contrast between montage scenes of Angie Harmon getting dressed, doing her makeup and preparing a perfect dinner and the coldness of her treatment of the children. Angie Harmon gives a nastily cold-blooded performance with deliciously campy lines like: “I’m twice the bitch you imagine you’ll ever be.” At one point, Jordan Hinson gets a throwaway line comparing her to The Stepford Wives (1975).

Antin creates some nasty scenes – like where Angie Harmon tells Jordan Hinson to do the dishes and she brings her hands up from the sink bleeding because Harmon has deliberately left broken glass beneath the soap suds; another where Angie Harmon puts oven cleaner on Bobby Coleman’s back and starts scrubbing just like she did to the floors earlier and his skin starts peeling off. The idea of attaching this behaviour to Munchausen’s By Proxy is a clever and original touch for a psycho-thriller.

The latter half tends to rely on psycho-thriller standards with Angie Harmon lurking about the house and popping up behind people, while the ending is a little too handily dependent on a deus ex machina like the kids conveniently having a brother who is a cop and can see through the Goodes lies.