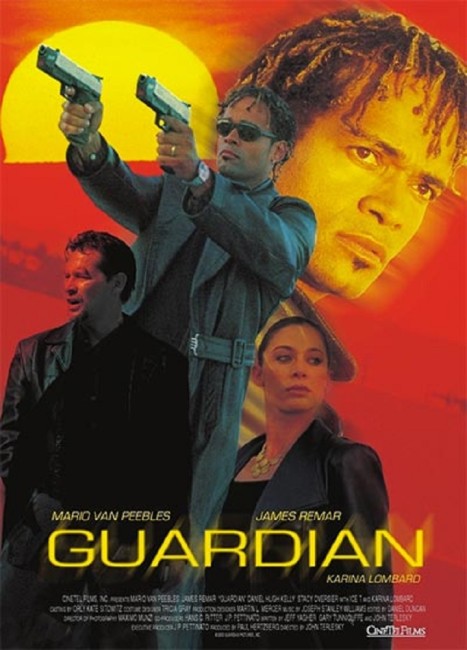 In 1991, archaeologist Daniel Lichtmann uncovers an artifact at a dig in Southern Iraq but Iraqi workers turn and attack the encampment, believing the artifact to be an ill omen. US Special Forces operative John Kross tries to rescue Lichtmann’s wife Susannah who has just given birth to a son. However, Kross fails in his mission, during which a mystery woman leaves him bleeding with symbols carved in his chest. Twelve years later Kross is working as a detective on the LAPD, tracking down a new drug with the street name Chaos that is causing users to become psychotic killers. At the same time, Kross receives visions and meets the same mystery woman who tells him that the demon Telal has returned. The demon is able to possess and pass through the bodies of various people – the only one able to stop it is Kross and the child that he saved in Iraq.

Guardian, which is no relation to William Friedkin’s druidic baby-snatching horror flick The Guardian (1990), the contemporaneous do-gooder tv series The Guardian (2001-4) with Simon Baker or the Kevin Costner film The Guardian (2006), is a horror-action hybrid from CineTel Films. CineTel is a company specialising in low-budget action movies and also produced the likes of 976-Evil (1988), Judgment Day (1999), Chain of Command (2000), Time Lapse (2001) and the Relentless series.

In terms of premise, Guardian is like an action movie version of Fallen (1998), the underrated film of a couple of years earlier concerning a body-hopping demon. Guardian is a competently made film but utterly predictable in all ways. The script only ever seems to toss together a salad of horror movie cliches – an ordained prophecy, a demon with a standard-issue deep voice returned to Earth, an unearthed artifact, an ordinary man discovering he is the chosen ‘guardian’, the need to protect a destined child.

In fact, beyond the basic stock elements thrown at us, the plot of Guardian is almost entirely minimalistic. It is never, for example, clear what Chaos, the drug that causes people to go psychotic, has to do with the demon’s diabolical plan. Neither for that matter is the action anything to get worked up about. Director John Terlesky throws in cliche wall-bouncing mid-air flips, while the big culminating showdown between good and evil is thoroughly anti-climactic.

Director John Terlesky made a number of other video-released genre films usually with an action bent that include the thriller The Pandora Project (1998), the apocalyptic Judgment Day (1999), the nuclear war thriller Chain of Command (2000), the serial killer thriller Malevolent (2002), the monster/action film Cerberus (2005), the monster movie Fire Serpent (2007) and the psycho-thriller By Appointment Only (2009).