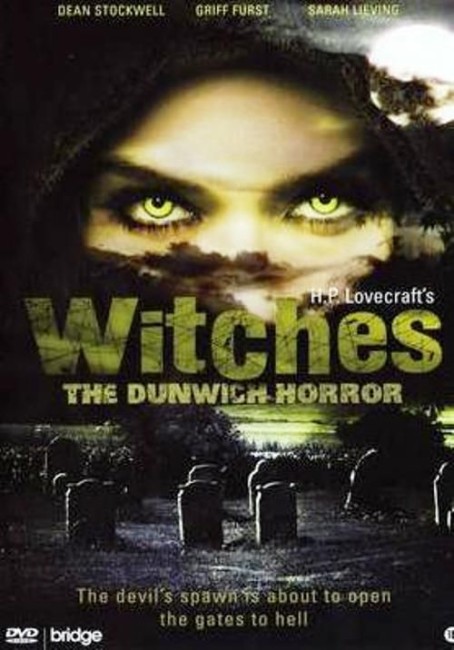 aka Witches: The Dunwich Horror

Professor Walter Rice is visited by his old colleague Dr Henry Armitage, a specialist in the occult. Henry asks Walter to join he and his assistant, Walter’s old girlfriend Fay Morgan, on a quest. They are seeking to find a complete version of the legendary occult book The Necronomicon all but one copy of which is missing the essential page that contains the incantation to summon and despatch the demon Yog-Sothoth. Henry believes that someone has partly opened a portal and it must be closed before Yog-Sothoth gets free. Walter and Fay set out on a quest for The Necronomicon, taking the opportunity to renew their relationship. Meanwhile, Wilbur Whately has abducted a woman to feed the monstrous thing in the attic of the Whately farmhouse. He was born after the creature in the attic bred with his now maddened mother Lavina. This has resulted in his aging at an accelerated rate – he is only ten years old but looks in his forties. He comes to Henry, offering to take him to where he can find the complete copy of The Necronomicon.

The Dunwich Horror (1929) is a short story by cult horror writer H.P. Lovecraft. (See below for other films adapted from H.P. Lovecraft’s works). Lovecraft specialised in a series of cosmological horror stories, concerning the release of ancient gods from beyond time or abominable experiments in miscegenation and forbidden science, almost all of which drive the protagonist insane. The story was previously filmed by Daniel Haller as The Dunwich Horror (1969), although this varied widely from the story. In a homage to the original, Dean Stockwell, who played Wilbur Whately in the 1969 version, has been cast as an occult investigator here.

To its favour, the 2009 version of The Dunwich Horror attempts to return more to the H.P. Lovecarft story than the 1969 version did. The Lovecraft story concerns Wilbur Whately who tends something monstrous that has taken over his farmhouse and his attempts to steal The Necronomicon from the Miskatonic University so that he can summon Yog-Sothoth. The story ends with Wilbur killed and the thing in the farmhouse emerging to go amok. The 1969 film eliminated the thing in the attic and simply concerned Whately’s attempts to conduct occult rituals and summon the Great Old Ones. This version returns far more to the story, reintroducing elements like Wilbur’s premature aging and true parentage.

That said, this version also makes a number of changes to the story. Most noticeably, the Lovecraft story was about Wilbur’s attempts to purloin the copy of The Necronomicon from the Miskatonic University library, whereas a substantial amount of the film here has added a new plot about the attempts to acquire The Necronomicon in the first place, requiring the professors to have to go on an occult quest.

There is also a good deal of H.P. Lovecraft fanservice throughout – the dropping of names like Charles Ward and a Derleth (after August Derleth, the writer who completed many Lovecraft fragments after his death) and places like Innsmouth, as well as an appearance by the ghost of Abdul Alhazared, the author of The Necronomicon. (Oddly enough, for all of this tribute to his works, H.P. Lovecraft’s name is not credited as the film’s source anywhere throughout).

You get a sinking feeling about The Dunwich Horror 2009 when you see that H.P. Lovecraft’s setting of Arkham, which is always in New England, has been relocated to Louisiana (because the production received tax breaks to film there). Things get even worse a few minutes later when Dean Stockwell and assistant Sarah Lieving go in to deliver the possessed Natacha Itzel and Stockwell asks her: “What’s your name?” “Caitlin,” which gets the response “That’s a quaint name for a 60,000 year old demon.” When an attempt at levity falls as clunkily flat as that in the first few minutes, the rest of the film does not seem promising. Nor do the images a few seconds later with Natacha Itzel manifesting cheap digital demon wings out of her back and Dean Stockwell firing tatty animated power blasts at her improve one’s expectations any. It is this that causes all hope for the film to plummet instantly.

The rest of the film does not improve any. The entire production is fatally shot in the foot by the cheapness of the budget. Just when the film seems in danger of settling into a passable competence, Leigh Scott kills it with ridiculous scenes like where guru Jeffrey Alan Pilars floats into a room a foot off the ground and delivers his portents as all the while women in a state of undress writhe in the background like somnambulistic belly dancers. You have to see the scene to see how ridiculous it looks. The film mounts to a cheap and unconvincing battle with a CGI demon, which is supposedly the creature lurking in the attic made manifest.