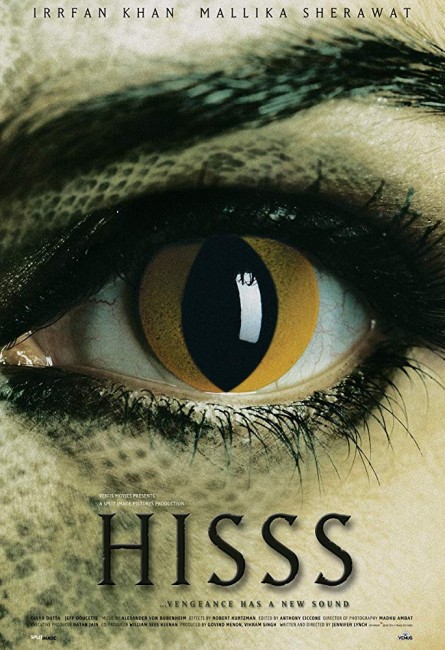 aka Nagin the Snake Woman

In the Ghats Forest of India, the ruthless Westerner George States forces a group of locals to capture the male of a pair of mating snakes. According to legend, the female of the pair is the snake goddess Nagin. States is hoping that by holding her mate prisoner, he can make Nagin come and give him the Naagnami Stone and thus obtain a cure for his cancer. The Nagin takes the form of a beautiful woman and sets out to track down those responsible. Police detective Vikram Gupta becomes involved after puzzling over victims that have been killed by massive doses of snake venom or by being swallowed and crushed. As he continues to encounter the bewitching Nagin, he is forced to accept what the locals are saying about the snake goddess who will wreak great devastation on all in her way.

Jennifer Lynch mostly comes with the sobriquet ‘daughter of David Lynch’ attached to her wherever she goes. After working on several of her father’s films and authoring the Twin Peaks (1990-1) book spinoff The Secret Diary of Laura Palmer (1990), Jennifer first appeared as a director with Boxing Helena (1993) at the young age of twenty-three. Boxing Helena ended up being widely ridiculed and was a critical disaster, although this author would beg consideration of it as a far more worthwhile film. Due to this (as well as a sidetrack into motherhood), it took Jennifer fifteen years to mount a comeback, which came with the well worthwhile police interrogation thriller Surveillance (2008). From there she went onto Hisss and the amazingly good Chained (2012) about a serial killer and his relationship with a young abductee, as well as work as a director for hire on various tv shows.

To all accounts, Hisss was a problematic production. Jennifer Lynch received backing from India and went to film with an Indian cast, shooting in Hindi, a language she did not speak. The film faced enormous problems from different means of production, local weather conditions, strike action and protests from religious groups. To add insult, Jennifer had the final cut of the film taken away from her by the producers who sought to recut and market Hisss as more of a horror film. (According to her, she conceived it more as a love story). The resulting film was critically trashed and little seen outside of India. There was however a documentary about the debacle with Despite the Gods (2012) by Penny Vozniak.

The snake woman theme doesn’t have a particularly good reputation on film as witness the likes of Cult of the Cobra (1955), The Snake Woman (1961) and Night of the Cobra Woman (1972), although there was the decent little Hammer offering The Reptile (1966). [Surprisingly this does not include Jess Franco’s Snakewoman (2005), which is merely about a woman with a snake tattoo]. There was also the previously titled SSSSSSSS! (1973) in which Dirk Benedict was turned into a snake man by a mad scientist. India did produce two previous snake woman films with Nagin (1976) and Nagina (1986). These, as with Hisss, draw on the Hindu belief in Nagas – snake spirits that can take the form of human men or women and are worshipped in many parts of the country.

Probably the film that Hisss comes the closest to, although perhaps not entirely intentionally, is Ken Russell’s campy The Lair of the White Worm (1988), which featured Amanda Donohoe as the modern incarnation of an ancient snake goddess. Russell planted tongue in cheek and peppered the film with absurd snake imagery. Similarly, Hisss is filled with snake imagery throughout and comes with an approach where you are entirely sure if it is taking itself seriously or not.

Whether you regard Hisss as a turkey or an unintentionally camp classic, Jennifer Lynch fails to make an uninteresting film, even when it clearly a work that has not emerged as she wanted it to. I tend to the view that Hisss is a flawed work of some interest at least on the grounds that I think Jennifer Lynch is a director who is deservous of much greater acclaim than she has received. Certainly, the film feels uneven – no doubt due to the producer’s interference – where scenes chop and change, seem not quite finished. The digital snake effects are so-so.

And then there is the downright weird such as where Lynch has Mallika Sherawat performing snake-like actions wherever she goes – swallowing animal eggs whole; devouring the body of a would-be rapist and then lying down after with a massively swollen pregnant belly as she waits to devour him; at its silliest when she starts responding to snake charmer music during the Holi celebrations; at the most sublimely weird in a scene where Mallika slithers up a lamppost, wraps herself around it and goes to sleep hanging from the very top.