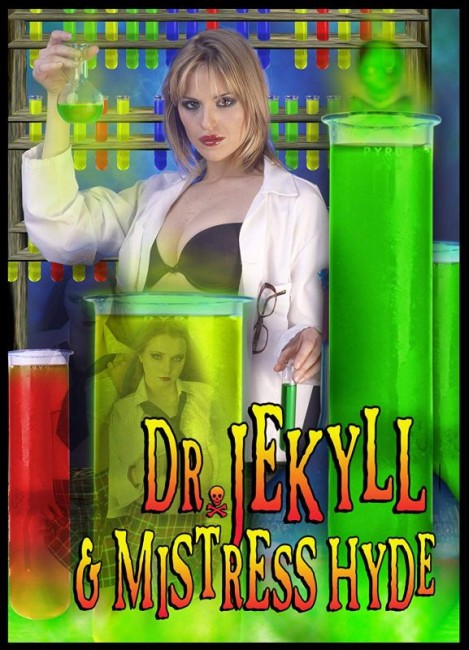 Psychologist Jackie Stevenson has developed a drug she calls Euphoria that she believes will allow people to bring out their repressed inner selves. She tries it out on severely depressed patient Martine Flagstone. However, the transformation causes Martine to sexually ravage Jackie and afterwards have to be committed to a padded cell. Jackie next tries a smaller dose on herself and emerges as someone sexually assured that she calls Heidi Hyde. Aroused by her experience with Martine, the changed Jackie goes out onto the streets and meets young prostitute Dawn Hopkins who resembles Martine. Together the two explore new sexual possibilities.

Robert Louis Stevenson’s The Strange Case of Dr Jekyll and Mr Hyde (1886) is the most adapted horror story in the history of cinema. One counts over thirty adaptations of the story and that is not including the numerous sons and daughters of, modernisations, comedies/parodies, retellings from the point-of-view of his maid and crossovers with other famous Victorian-era monsters. (For a look at the various film interpretations see Jekyll and Hyde Films).

There have been several versions where Dr Jekyll turns into a woman with Hammer’s Dr Jekyll and Sister Hyde (1971), the Italian comedy Dr Jekyll and the Gentle Lady (1971) and the comedy Dr Jekyll and Ms Hyde (1995), although Dr. Jekyll & Mistress Hyde is the first where both Jekyll and Hyde are women. (In fact, all but one of the numerous trysts that occur here are between women and there is only a single male actor in the film who turns up for a couple of scenes). Dr. Jekyll & Mistress Hyde clearly feels indebted to Hammer’s Sister Hyde in that it names one character Martine and another Beswick after actress Martine Beswick who played the Sister Hyde half in that film. There are also other characters named Dawn Hopkins and Ingrid, which may be intended as homage to Miriam Hopkins and Ingrid Bergman who were the leading ladies in respectively Dr. Jekyll and Mr. Hyde (1931) and Dr Jekyll and Mr Hyde (1941).

I liked Dr. Jekyll & Mistress Hyde for the fact that director Tony Marsiglia gives it an interestingly arty approach that makes it more than just the usual naked bodies pretending to hump and moan. The scene where Julian and Misty get it on in the warehouse takes place in an empty room where the two place a scarlet red sheet on the floor on which to tumble, while an old rock’n’roll song plays on a record player as Misty does a teasing strip routine in a schoolgirl uniform, before the score transforms into something broodingly ambient for the main action. It is certainly not what you expect from one of these films.

The film is shot with minimal sets – a hospital represented by a corrugated iron corridor and elsewhere mostly the empty warehouse. As fitting the duality theme, all of the actresses play two roles – Julian Wells is Jekyll and Hyde; Misty Mundae is both the patient that Julian puts in the rubber room and the street hooker she fixates on; Ruby LaRocca is both the other hooker they invite for a threeway and a tv interviewer who bookends the show; while Andrea Davis is the maid and at the end would appear to have taken over the role of the doctor. One of the strangest parts of the film is the soundtrack where Marsiglia leaves in the scratches the record player makes in its groove after the song used in the above strip number has finished, while we constantly get the sounds of cars, sirens and trains coming from outside even though we never see any vehicles. This and Marsiglia’s odd editing scheme gives you the impression of a film that takes place more as a state of mind than as a narrative. Even more unusual is seeing an erotic film where one of the characters is depicted as an intravenous drug user where usually any of the more realistic elements that puncture the glossy fantasy of films like this are erased.

Where the film falls down is in the twist that comes at the end [PLOT SPOILERS]. The idea of a drug that liberates sexuality doesn’t seem to go many places – just a series of erotic encounters – and so the film introduces a bizarre left field twist right at the end where Dr Jekyll’s maid, who is sexually used by her pig of a husband, conspires with Misty Mundae’s hooker to overdose Dr Jekyll, knowing that she will inherit everything in the will. The maid is a character that has been introduced in one scene at the start and then reappears again at the end so her abrupt emergence to centre stage seems head-scratching, not to mention one that throws the entire course of the Jekyll and Hyde story that we thought we were watching into a confusing spin. It is surely the equivalent of watching say a mad scientist film where the monster is about to go on a rampage where instead Igor leaps up without any forewarning and commits the scientist to an asylum so they can steal the castle and laboratory.