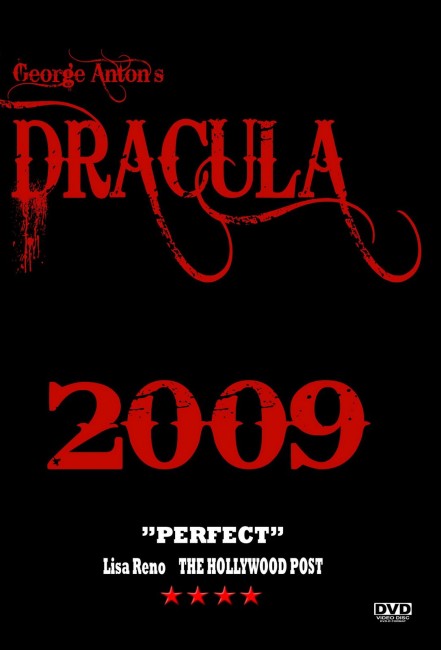 In present-day Los Angeles, the psychiatrist Van Helsing tries to convince police detective Seward of the actuality of vampires. He is insistent that Count Dracula is conducting a killing spree in the city, having set his sights on seducing the entertainment show reporter Lucy Westenra. Van Helsing becomes obsessive in his quest for more knowledge about vampires. Realtor Jonathan Harker is sent to Transylvania to conduct a deal for Count Dracula and encounters colleague Reinfeld who has gone crazy. Harker makes an escape from Dracula’s castle and returns to L.A., infected by the vampire’s bite. At the same time, Matt, a struggling screenwriter in the city, must deal with parental disdain as he struggles to sell his big script.

This is an interesting oddity that offers another adaptation of Bram Stoker’s Dracula (1897). (See below for the other film adaptations of Dracula). This version comes from George Anton, a low-budget indie filmmaker who has made other works such as the gonzo sf film Robinson Crusoe: The Great Blitzkrieg (2008), American Style (2008), a modernised Sherlock Holmes (2011), Apocalypse 2012 (2012), Dead on Arrival (2013) and George Anton’s Romeo and Juliet (2014). George Anton’s films are obscure and under the commercial radar – I, for example, found Dracula after browsing the archives of YouTube (see below for link) where it had been released free online, along with Anton’s other films.

George Anton offers up one of the most different variations on Dracula that we have seen to date. The idea of a modernised Dracula has been conducted before – see Dracula (2002), which relocated the story to contemporary Europe. Anton takes the far more radical step of uprooting and locating the story in Hollywood. This leads to some interesting interpolations – Lucy Westenra is recast from a society woman dangling multiple suitors to an E! Entertainment type reporter who is dating three guys at once; Dr Seward now becomes an investigating police detective; and Van Helsing a psychiatrist. This is also a version of Dracula that takes the challenging step of telling the story in full acknowledgement of the body of vampire films out there (which it should be pointed out all draw themselves from what Bram Stoker originally wrote down in Dracula).

This is also a version of Dracula where Count Dracula never forms a particularly active threat or is on screen much. Indeed, instead of building Dracula into a nemesis, the film seems more interested in completely unrelated aspects such as its B-plot about the struggles of an aspiring Hollywood screenwriter (Dan Martino). Although you could argue that this is being faithful to Stoker who had Dracula’s appearances throughout the story relatively few (something that has been changed by almost all of the film versions).

The film features a cast of complete unknowns. Among these, there is some occasional amateur acting but everyone makes a more than reasonable effort and most of the performances come across at a generally professional level – most of the cast would have no trouble being hired elsewhere on better budgeted films. Furthermore, George Anton writes with a reasonable roundedness and edge that gives the characters life. (Although it is somewhat disconcerting seeing many of Stoker’s familiar characters now cast with a standard line-up of self-absorbed Hollywood pretty boys and in ways that are often the complete opposite of how Stoker wrote them). Despite the concerted efforts made by all, the scenes with Gary Youst’s Van Helsing getting inspiration by having conversations with an obelisk in a park cause the film to collapse into errant silliness. The (lack of) budget undeniably shows through, in particular when it comes to the variable sound quality (always the curse of no-budget shot-on-video films that cannot afford ADR).

The biggest drawback of the film for me was not so much the low-budget or anything associated with it but a confusing and hard to follow screenplay. It may seem that a film adapted from a well known, multiply adapted novel would have most of its story told for it – all it has to do is buy into its audience’s familiarity with the story – but that is not so here as the film confusingly flips back and forward between parts of the story and tells them in a very non-linear fashion. This does lead to some odd aspects – Jonathan Harker’s flight from Dracula’s castle is a scene that seems to take up most of the film and we never see what happens to him once inside the castle, whereas Bram Stoker has all of this taking place in the first few four chapters of the book.

In between the elements of Dracula playing out, there is also a B plot about Matt, a young screenwriter (Dan Martino – who one should also note is one of the writers of the film), and his struggles to sell a script. As we follow aspects of his everyday life, what is going on becomes confusing – we suddenly go “wait a minute, isn’t the actor playing Van Helsing (Gary Youst) also the one that plays the role of Matt’s father?” You follow the scene with the father closely, trying to work out how this possibly relates to Van Helsing and scratch your head figuring that maybe they cut on casting costs by having one actor play two roles or that we will find down the track that both characters are related. Similarly, Derek Baker, who plays Jonathan Harker, later doubles as the Hollywood producer that Dan Martino sells his script to. I must admit I failed to follow the ending that the film arrived at, where we get the impression that all of the modernised Dracula that we have seen playing out before us is in fact the script that Dan Martino is writing/pitching and that elements from his real-life have bled into the script.