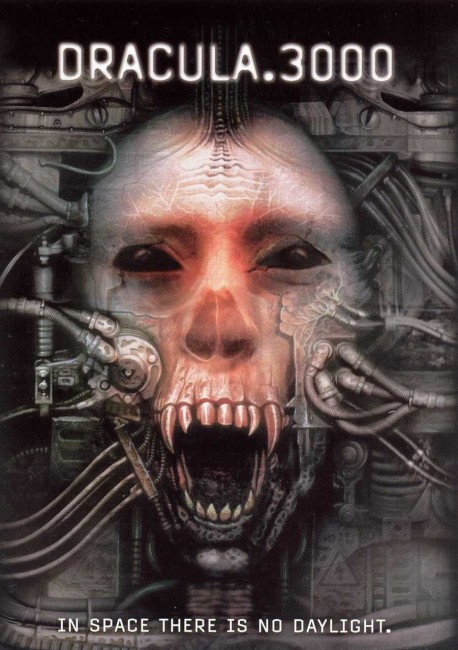 The year 3000. The salvage ship Mother III discovers the ship The Demeter, which has been abandoned in the Carpathian System for fifty years. They board and investigate, finding all the crew dead. The Mother III then abruptly separates from the ship on its own, leaving them abandoned aboard The Demeter. Crewman 187 breaks open a series of coffins he finds, looking for drugs but is attacked. As the others come to his aid, he suddenly turns and attacks them, revealing he has been turned into a vampire. They discover that The Demeter has been transporting Count Orlock, the last vampire from the planet Transylvania who has travelled out into the universe to seek more blood.

The American company The Asylum have had a reasonable degree of success in the 2000s with a series of cheap films with titles that copy mainstream hits – Snakes on a Train (2006), I Am Omega (2007), Transmorphers (2007), Allan Quatermain and the Temple of Skulls (2008), The Day the Earth Stopped (2008) etc. Even though it isn’t one of their films, Dracula 3000 could easily have been an Asylum copy of Dracula 2000 (2000), albeit with the suffix enterprisingly upped by a millennium.

The very act of placing Dracula into a future setting gives the film some intriguing possibilities. In actuality, what Dracula 3000 transpires as is a standard copy of Alien (1979) but with the absurd notion of people being pursued through spaceship corridors by Count Dracula rather than an alien nasty. The film does the same thing that a number of other modernised vampire films have – of creating equivalents of the characters from Dracula (1897) in the present day. Thus we improbably have a Captain Van Helsing commanding the ship and shipmates variously named after Mina Murray and Arthur Holmwood, as well as the vampire who is named after the one in Nosferatu (1922).

The similarities never go beyond appropriating the names – in every other way the characters are just the standard crew complement for an Alien copy. In another absurd interpolation, Dracula also comes from the planet Transylvania in the Carpathian System – although in contradiction to this, Casper Van Dien is able to look up the computer and discover that hereditarily Van Helsing’s have fought Dracula’s, even though this Dracula appears to come from another planet and to only be leaving his own system for the first time now that his planet’s bloodstock has become depleted.

Dracula 3000 further collapses into absurdity. The most irritating characters are the two played Coolio and Tiny Lister. They bear the brunt of the film’s worst dialogue – Coolio comes out with lines like: “Captain, I am going to have to insist on checking the corpse for illegal substances.” It is a ridiculous performance that Coolio gives, which becomes even more absurd and campy when once he becomes a vampire. He pursues Erika Eleniak through the ship yelling: “Did I ever tell you about the time I wanted to ejaculate over your bazongas?” Some of these lines provide occasional amusement: the straight-faced “He wants to kill her but I believe he wants to titty fuck her first.” On the plus side, Casper Van Dien provides solid heroism as always in far too many B-budget films like this, while former Playboy model Erika Eleniak gives a not too bad performance for once.

There is the odd scene that works – like where Tiny Lister has Erika Eleniak tied up and is guarding her where she keeps begging him to untie her, even with the promise of undressing her and seeing her naked to check her for vampire bites, and we sit in a place unsure whether she can be trusted or not. There is a scene where Dracula tempts the wheelchair-ridden Grant Swanby with the promise of being able to walk again if he joins him. The sets are cheap ship corridors that are standard for this type of film. Darrell James Roodt offers up too many cliche shots of shadows flittering past in the foreground.

Unfortunately, just when it seems to be getting working, Dracula 3000 arrives at a lame ending. The ship heads towards the sun where Dracula will be incinerated, Erika Eleniak reveals to Tiny Lister that she is a pleasure robot, before we abruptly cut to a video of Udo Kier announcing that he is destroying the ship whereupon the end credits run. It is hard to think of more of a non-event washout of an ending than that.

Darrell James Roodt is a prolific South African director who has worked in many genres, including action movies, thrillers, dramas and biopics. His other genre material is the horror film City of Blood (1987), the futuristic Sax Rohmer adaptation Sumuru (2003), the monster movie Cryptid (2006), the animal attack film Prey (2007) and the horror film The Lullaby (2018).