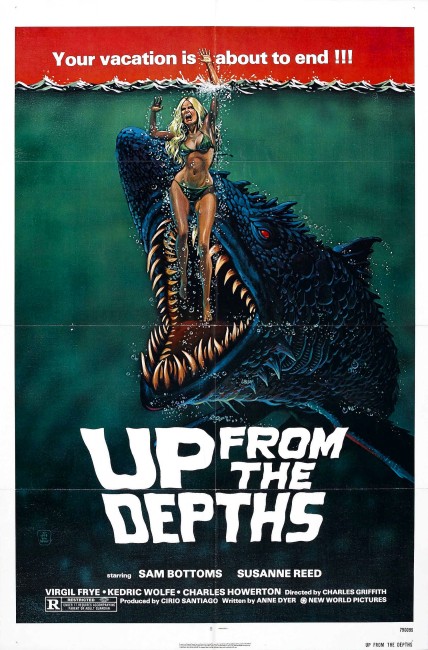 People are turning up dead in the waters near the holiday resort on the Hawaiian island of Mahu. The hotel manager Oscar Forbes denies responsibility for anything that does not happen on hotel property and tries to have the incidents hushed up. As people become aware, there is a giant fish attacking everything that enters the water.

Charles B. Griffith was a veteran writer for B-budget director/producer Roger Corman in his heyday, having turned out scripts for Corman cheapies such as It Conquered the World (1956), Not Of This Earth (1957), Attack of the Crab Monsters (1957), Teenage Doll (1957) and the all-time Corman classic The Little Shop of Horrors (1960). Griffith directed Up from the Depths for his old friend Roger Corman (who produces but is absent from the credits) via Corman’s New World Pictures.

The film was shot in the Philippines, which had become a cut-price location for filmmakers of the day (Corman made extensive use of it) due to its low wages and lack of unionisation. (To the film’s favour, the Philippines is at least made to pass for Hawaii with reasonable conviction). The film is produced by Cirio H. Santiago, one of the veteran producer/directors of the Filipino exploitation movement, having made classics such as TNT Jackson (1974), The Muthers (1976), Vampire Hookers (1978) and Caged Fury (1983).

Up from the Depths is usually lumped in with several other films that came out in the aftermath of Jaws spoofing the Animals Amok genre or offering a more light-hearted interpretation – see also Attack of the Killer Tomatoes (1978), Piranha, Alligator (1980), Blood Beach (1980) and Humanoids from the Deep. However, a viewing of Up from the Depths finds almost no evidence to make the case that it is intended as a spoof. It could be that the name of Charles B. Griffith, strongly associated with his comedy scripts for Corman, led people to expect that this was the case. Certainly, none of the humour that was present in the Griffith’s scripts for the Corman classics is to be found here – the show is played straight.

Up from the Depths reads as a low rent Jaws wannabe in which nobody present is making an effort. It is as though Charles B. Griffith is asleep at the wheel – the plot is slack, there is no tension to it or any of the fish attack scenes. The fish (it is never identified which species it is) looks highly unconvincing and there is some extremely murky underwater photography. The film features some terrible performances, in particular from Kedric Wolfe as the hotel manager, a tall beanpole figure who flails about the film delivering everything in a stiltedly awkward panic, or Virgil Frye who gives a performance so laidback you might not be mistaken for thinking he was asleep during many of his scenes.

One other bugbear about the film is that the IMDB has been insisting for several years now that Up from the Depths, the Roger Corman directed and Charles B. Griffith scripted films Naked Paradise (1957) and Creature from the Haunted Sea (1961), and the subsequent Cirio H. Santiago directed Demon of Paradise (1987) are all remakes of one another. This is simply untrue. The four films have a vaguely similar tropical island setting, three of them feature monsters from the deep (but none of them from the same species), three have scripts from Charles B. Griffith (but Demon of Paradise does not), two of them feature holiday resorts and two feature gangster characters. However, a detailed examination of the plots of each film show that beyond these vague surface similarities it takes considerable redefinition of the term remake for it to be considered that these films are even remotely based on one another.

Charles B. Griffith was a veteran writer for B-budget director/producer Roger Corman in his heyday, turning out genre scripts for Corman-directed films such as It Conquered the World (1956), Not Of This Earth (1957), Attack of the Crab Monsters (1957), The Undead (1957), A Bucket of Blood (1959), Creature from the Haunted Sea (1961), and the classic The Little Shop of Horrors (1960), as well as Corman’s non-genre biker movie classic The Wild Angels (1966). Griffith also wrote other Corman-produced films such as Atlas (1961) and Death Race 2000 (1975). Griffith made his directorial debut with the B-budget scuba-diving film Forbidden Island (1958). In later years, Corman produced several films that Griffith wrote and directed with the hit car chase film Eat My Dust (1976), the parody Dr Heckyl and Mr Hype (1980) and Wizards of the Lost Kingdom II (1989).