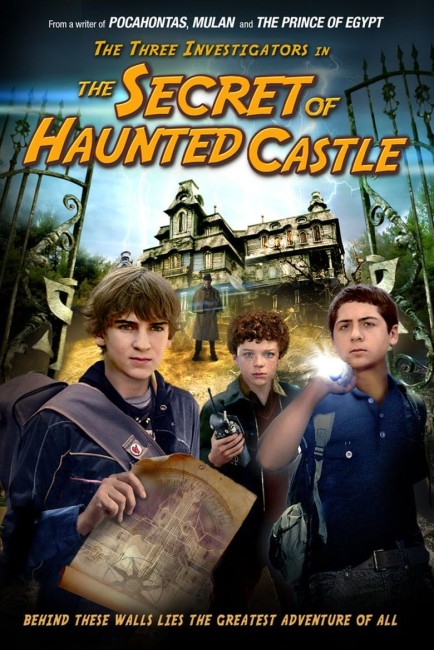 aka The Three Investigators in the Secret of Haunted Castle
(Die Drei: Das Verfluchte Schloss)

In Rocky Beach, young Jupiter Jones and his two best friends Pete Crenshaw and Bob Andrews run The Three Investigators, a private detective agency, from a secret hideout in the junkyard of Jupiter’s uncle. Jupiter’s aunt and uncle throw a surprise birthday party for him only for the Investigators to discover that a clown that nobody invited is also present. The clown gets away but drops what he was trying to steal – a videotape left by Jupiter’s late parents. Examining the damaged tape, they find clues that lead to the mansion of Stephen Terrill, nicknamed Terror Castle, in the High Sierras. They head there to investigate, coming up against the local sheriff who does not like them and his daughter Caroline who believes that she and Bob are reincarnated lovers. They find the house to be a spooky place filled with apparitions, as well as a series of clues that lead to the hiding place of Stephen Terrill’s treasure.

The Three Investigators were an essential part of my childhood. I remember quite clearly my grandmother buying me a copy of The Mystery of the Screaming Clock (1968) – no, not a first-run original edition, I’m not that old – to occupy me while my mother was in hospital. I quickly became hooked on junior detective mysteries and in the next few years consumed every copy of The Three Investigators I could find in local libraries and bookstores. When these ran out, I moved onto Hardy Boys, Nancy Drew and Encyclopaedia Brown. I think these, more than anything, gave me a grounding in logic and a fascination with puzzle solving. I even cringe at remembering my own floundering attempts to set up a juvenile detective agency at around the age of seven – my big life lesson at that age was that reality wasn’t like it was in fiction and adults have next to no interest in kids trying to solve their problems.

The Three Investigators were a series of books created by Robert Arthur Jr. The series began with The Secret of Terror Castle (1964), on which this film is directly based. Arthur wrote the first eleven books, after which the series was taken over by other authors. There were 43 books published up until the series ended in 1987. In the original print runs, the series was billed as ‘Alfred Hitchcock and the Three Investigators in …’ where the three detectives would ask the advice of director Alfred Hitchcock and then recount their deductions to him in the final chapter. With the death of Hitchcock in 1980, his part in the series was written out and the kids’ mentor became former detective Hector Sebastian. The Three Investigators were all boys of an unspecified age – Jupiter Jones of brilliant deductive mind, the more physical Pete Crenshaw and diligent researcher Bob Andrews. The books always operated to a formula that set up a seemingly supernatural mystery, as witness a random selection of titles such as The Mystery of the Whispering Mummy (1965), The Mystery of the Green Ghost (1965), The Mystery of the Talking Skull (1969), The Secret of the Haunted Mirror (1974) where, through the process of investigation, this would always be revealed as having a rational explanation.

In starting to watch the film, the purist in me, who grew up reading stories that were written in the 1960s and 70s, found it grating to watch the Three Investigators being updated to the 2000s from about the opening scene where we see Chancellor Miller’s Jupiter receiving a text message. The film readily upgrades their detective skills with a host of modern devices – GPS tracking, computer enhancement of video images, the use of laptops, while Bob’s research skills at the local library and newspaper files has been updated to having him a whiz with the internet search engine.

There are many aspects where The Secret of Terror Castle seems to be doing a fine job of replicating the staple elements of The Three Investigators books – there is Worthington the chauffeur and the Rolls Royce that Jupiter won in a prize; there is the Jones Junkyard and the Investigators’ secret hideout in a caravan hidden amid the junk that is accessed by multiple concealed doorways; their business card with the three question marks. About the only two aspects that we don’t get are a pudgy Jupiter and no equivalent of Alfred Hitchcock (or Hector Sebastian) that the kids go to to explain their deductions at the end. I could probably quibble with the conception of some of the characters, which didn’t match the ones that I had in my head, but that is a very subjective criticism; certainly, the kids chosen are adequate in the roles.

The film loosely adapts The Secret of Terror Castle – in the original, they were investigating a dead movie actor’s mansion in the Hollywood Hills that is supposedly haunted. In the film, this has been changed to a big, creepy old house in the High Sierras that was built by an inventor in the 19th Century. The pretext of going to examine it at Alfred Hitchcock’s behest as a location for one of films has been replaced by a backstory about clues left by Jupiter’s late parents.

The Three Investigators books were noted for their offering up of spooky mysteries and seemingly haunted/supernatural phenomena only to arrive at a mundane explanation of this as being due to explainable causes. In this regard, the film creates a spooky mansion where I was impressed with the fact that Florian Baxmeyer generated a reasonable haunted atmosphere – and moreover, did so while taking the proceedings seriously and without the need to add comic relief or make the scares unserious as too many modern children’s ghost stories are wont to do. The scenes where the Investigators deduce the secrets of the clues leading to the cache of diamonds is cleverly done. This is none more so than when it comes to the unveiling of the Steampunk-styled inventions that have been set up around the house, including a steam-powered set of 3D glasses that allow the clues to be read in the map.

On the other hand, where the film goes astray from the books is in trying to add a modern sexual vibe to the characters. Given that they are supposedly just on the cusp of puberty, this does seem somewhat indecent. There is the cringe-inducing scene where Pete gets Worthington to turn up rock music on the radio as they cruise through the town in the Rolls and he hangs out the window cat-calling to girls. There is a bizarre conversation between Jonathan Pienaar’s sheriff about what Cameron Monaghan is doing with his daughter (Annette Kemp) that involves some grating innuendo where Bob unintentionally talks about touching her ‘with his gear’ that makes you wonder just what audience the film has been made for. The scenes where Cameron Monaghan and Annette Kemp play out a bizarre romance in which she believes they are famous reincarnated lovers is also an extremely silly addition to the plot.

This is also notedly a film based on a very American series of stories that is being made by non-Americans. The kids cast are all Americans but there is also South African actor Jonathan Pienaar who plays what is clearly someone’s idea of a cliche comic American law enforcement official with a broadly caricatured accent.