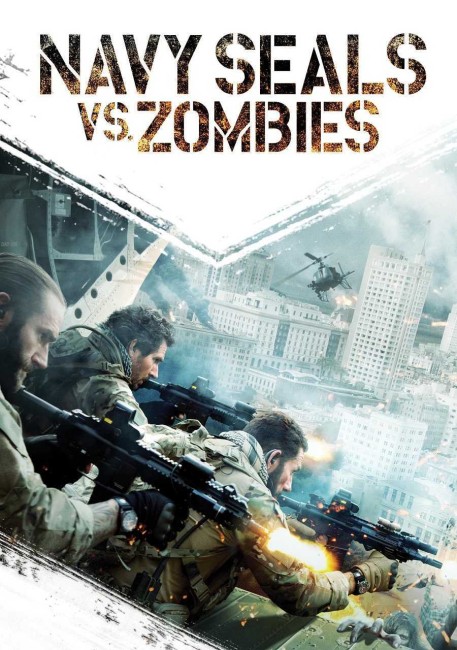 A squad of Navy SEALs are despatched to Baton Rouge to rescue the Vice President after the city has gone into lockdown and a state of emergency has been declared. The SEALs make it to where the VP is sequestered and prepare to move to extraction only to discover that the city has been overrun by zombies. The mission quickly goes awry and various of their party are bitten. The rest try to make it through the ferocious zombie hordes filling the streets to the secondary target of a laboratory to rescue a scientist who has essential samples that could solve the crisis.

The zombie film has gained a new life in the 2000s/10s following the success of films such as Resident Evil (2002), 28 Days Later (2002), Dawn of the Dead (2004) and Shaun of the Dead (2004). Following this, much of the zombie film of the late 2000s and certainly into the 2010s has become self-parodying, mashing up wacky titles and/or incongruous concepts. Indeed, one of the surprises about Navy Seals vs Zombies is the fact that despite its use of the ‘vs’ in the title, it is not another gonzo zombie film unlike all the other films with vs titles – see the likes of Santa Claus vs the Zombies (2010), Cockneys vs Zombies (2012), Pro Wrestlers vs Zombies (2014), Bigfoot vs Zombies (2016) – but one of the few modern efforts that plays itself seriously. For overview of the genre see Zombie Films.

The basic set up of Navy Seals vs Zombies has been lifted from Escape from New York (1981) – tough soldier(s) have to go into a city that has been quarantined from the outside world and rescue the (Vice) President. Whereas Escape from New York gave us Manhattan crawling with gangs and street lowlifes, here we get Baton Rouge overrun by zombies. Otherwise the set-up and dramatic arc of both films is remarkably similar.

The other thing that is noticeable about Navy Seals vs Zombies is that it takes the Navy SEALs part verrrry seriously. As opposed to most military films, this feels like someone has spent a good amount of time doing their research about the way military units operate. (At least two of the actors playing the SEALs – Mikal Vega and Kevin Kent – have served in actual military combat).

The only real technical quibble would be a question of jurisdiction – Navy SEALs are a special forces unit dealing with sea-based operations and given that Baton Rouge is four hours drive inland from the Gulf of Mexico, this seems just a little bit out of their way. Furthermore, the rescue of the Vice President is surely something that would be tackled by the Secret Service or perhaps the Marines as opposed to a special operations branch of the Navy. Apparently dissatisfied with even this, a few months later a bunch of military veterans raised a budget via crowdfunding and made their own zombie film to show how military should be properly portrayed on the screen, resulting in the astonishingly awful Range 15 (2016).

As a result, the SEALs we have on screen actually feel like a tight, well-trained unit going into action. There is no false machismo, just people doing what they have been drilled to do and a point made that the preservation of life is their utmost priority rather than mindlessly shooting everything they come across. You come out thinking that the people who made the film are the same ones who fervently believe in doing their duty for their country and that Chris Kyle was a national hero rather than a racist murderer, nevertheless the attention to accuracy is noticeable. The film tends to place more focus on the Navy SEALs part than the zombies at which it is strictly average as the genre goes. Nevertheless, the strong military emphasis does make the siege action scenes move with a solidity and credibility.

Navy Seals vs Zombies was the first directorial outing for Stanton Barrett, a former racing car driver with extensive credits as a stuntman.