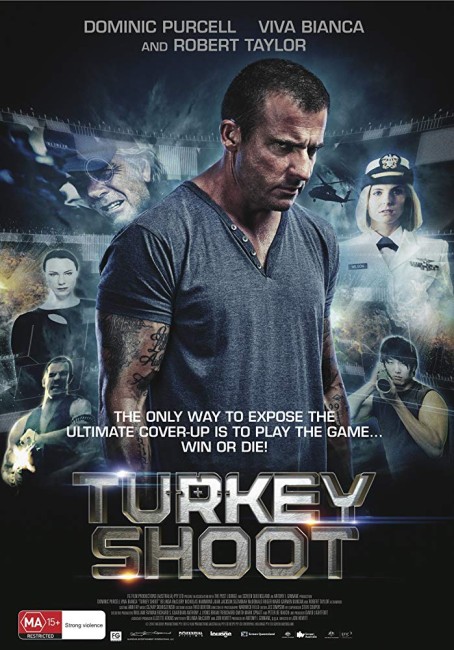 The year 2040. Rick Tyler, a former Navy SEAL who was convicted of the mass murder of women and children in Africa, is released from jail to take part as a contestant on ‘Turkey Shoot’ – a top-rating tv show in which criminals have to run for their lives through different environments while pursued by armed hunters. The game begins and Rick proves highly resourceful, eliminating most of his opponents and making his way up through the levels. Meanwhile, US Joints Chief General Thatcher is in hospital dying with cancer and reveals to Rick’s former comrade Jill Wilson that Rick was framed. She breaks Rick out of the game and the two go on the run, determined to get the evidence that will clear Rick, something that could bring down the current US President. Rick’s escape also serves to make him a ratings success on ‘Turkey Shoot’ and efforts intensify to bring him back into the game for the final round.

Turkey Shoot (1983) was one of the classic films of the great era of Ozploitation. It borrowed the basics of The Most Dangerous Game (1932) with ordinary people running for their lives pursued by armed hunters and transposed it into a totalitarian future prison setting. There is little that is standout about the original Turkey Shoot, most of it being offset by director Brian Trenchard-Smith’s campy, splattery tone.

Come the 2000s and Australia, like Hollywood throughout the 2000s/10s, has started remaking classic genre films of the 1970s. This period has also seen remakes of Ozploitation classics such as Long Weekend (2008) and Patrick (2013). This remake of Turkey Shoot comes from the original’s producer Antony I. Ginnane, whose name graces a great many of the films from the original Ozploitation fad (and who makes a minor cameo here as the Australian Prime Minister), while Brian Trenchard-Smith is also present as an executive producer and Carmen Duncan, one of the fellow prisoners from the original, plays the US President. We even get a clip from the original at one point, along with mention made of a ‘Railsback Storage Company’ in homage to the original’s lead actor Steve Railsback.

Turkey Shoot has dramatically changed between 1983 and 2014. Crucially, what has happened is that the prison and dystopian future angles of the original have been jettisoned. There is still the human bloodsports theme but now the other three prisoners who took part in the hunt alongside the hero of the original have been written out. The major new element that comes in is that this is all part of a reality tv show. In other words, what we have is now Turkey Shoot rewritten as a copy of The Hunger Games (2012) – although the theme of a single unarmed man pursued by hunters who manages to become a public hero by subverting the system reminds far more of The Running Man (1987).

That said, even though the new Turkey Shoot sets out to be a Hunger Games copy, this is largely abandoned after the 45 minute point and the film tangents off into a plot about a military frame-up and political double-dealings where the hunted man Dominic Purcell escapes into the outside world in an effort to clear his name – an aspect that doesn’t even remotely resemble the original.

The original Turkey Shoot was considered one of the worst Australian films ever made; the remake has the distinction of being even worse than that. Jon Hewitt delivers utterly generic action scenes that come without any excitement. The original at least crafted a quasi-credible future; this doesn’t even seem to be making the effort in any department. The film still takes place in the future – some sixteen years from now – but where very little appears to have changed – people wear contemporary clothing and drive modern cars. Indeed, the only difference is a few socio-political references along the tv screen news ticker. The island location of the original has been cheaply substituted for shootouts staged around a docklands area and an empty warehouse. The new plot comes with a socio-political/media world naivete; by the time of machinations of its happy wrap-up end resolution, this verges on the laughable.

Turkey Shoot 2014 is directed by Jon Hewitt who has delivered a modest output of mostly genre films over the last decade with the likes of the vampire film Bloodlust (1992), the serial killer thriller Redball (1999), Darklovestory (2006), the serial killer thriller Acolytes (2008) and X (2011). He co-writes the film with his frequent collaborator, wife Belinda McCrory, an actress who also plays the role of the corporate suit in charge of the tv show.