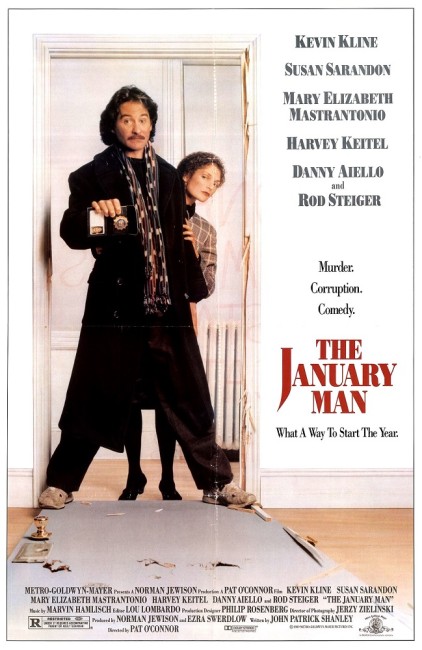 When the best friend of the Mayor of New York’s daughter is murdered, the eleventh victim of a serial killer nicknamed The January Man, the mayor places pressure on Police Commissioner Frank Starkey to stop the killer. Starkey recruits his brother Nick, a brilliant detective who was made a scapegoat in a scandal and is now working as a fireman. Nick reluctantly takes the case and in the course of doing becomes involved with the mayor’s daughter. Nick insists that the person the police arrest as the killer is not the real killer. Despite official pressure to close the case, he goes out on a limb to find the real killer.

The January Man is a serial killer thriller. It has an impressive cast line-up and it is written by a writer – John Patrick Shanley – who has gone on to some quite big and worthwhile projects – Joe vs the Volcano (1990), Alive (1993) and Doubt (2008). Equally, Irish director Pat O’Connor has made some solid non-genre dramatic works with the likes of Cal (1984), A Month in the Country (1987), Stars and Bars (1988), Inventing the Abbotts (1997) and Dancing at Lughnasa (1998). However, the film itself is a strong nominee for real turkey status. One gets the impression John Patrick Shanley wrote it as a comedy but Pat O’Connor failed to understand that.

The opening scenes with Rod Steiger bawling his head off (again!) and Kevin Kline introduced as a fireman because he has failed as a detective; a bizarre pantomime with Kline trying to catch his cat in his apartment while acting completely nonchalant about Alan Rickman painting a nude model sitting on his couch; and Steiger’s question to Harvey Keitel, “What did you do to get him back?” which gets the reply “I let him make my wife dinner,” are farcical in their complete lack of conviction.

From there it only goes from bad to worse. Nothing quite matches the bizarreness that occurs during the investigation though. The piecing together of the puzzle is hilarious in its preposterousness – how the buildings the killer strikes at all map out onto the constellation Virgo and the floors of each building match the notes of the tune Calendar Girl (1961). Kevin Kline is outfitted with lines like: “I’ve figured out the motive. This man has a lot of anger towards women. It must have been his mother,” or “This murderer has got one thing in common with us – he’s got a mother.”

Pat O’Connor seems to have discovered the film was intended as a comedy just in time for the ending. The scenes with Kevin Kline trying to bash down the apartment door with an axe and being dragged down the stairs backwards by the killer, and the lady of the apartment who cries “Where’s my door?” which gets the reply “It’s on the floor” are hilarious, whether intentional or otherwise.

What stops The January Man from collapsing into complete laughability is a valiant attempt from the cast to give it conviction. Kevin Kline – a comedy actor wildly miscast – gives it a go but is caught halfway between the comedy playing the film needs and treating it seriously. Mary Elizabeth Mastrantonio is much better, while Harvey Keitel and Danny Aiello provide dependable support.