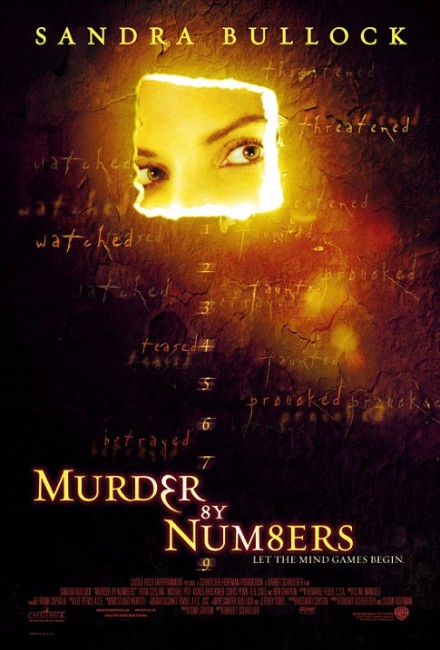 Cassie Mayweather, a tough homicide detective, and her new partner Sam Kennedy investigate the murder of a woman who has been found strangled and left wrapped in plastic by a riverside. Cassie seduces Sam but then he learns that she has difficulty getting on with all her partners and hides demons from her past. Behind the killings are two local teens, handsome popular Richard Haywood and geekish introverted Justin Pendleton, who have come together in a pact to commit a murder with a victim chosen at random and forensic evidence planted to implicate school janitor Raymond Feathers. Even though the police department is happy to blame Feathers, Cassie is certain the forensics do not add up and goes out on a limb, defying her superiors, to pursue Justin and Richard.

The idea of a serial killer thriller with Sandra Bullock is something that stops you dead before you even go into the theatre. At least at this point during the early 2000s, Sandra Bullock had been highly successful in cornering a certain market in romantic comedies. All of her appeal is in the cuteness of seeming perpetually flustered and lacking in self-certainty. Murder By Numbers was clearly an effort upon Sandra Bullock’s part to expand her range – she even Executive Produces the film – and the part of the emotionally burned-out homicide cop haunted by her past is at about 180o remove from the previous light comedy romantic roles she became identified with.

While one is all in favour of actors trying to stretch their range, Bullock unfortunately comes nowhere near giving the role the hard edge that it is written with. She is just the same cute, vaguely flustered character she always is and the character’s toughness never extends beyond a couple of scenes where she chews out her co-workers. It is fatal miscasting that scuppers the heart of darkness that underlies Murder By Numbers. Contrast this to similar roles like the tough certainty that Jodie Foster brought in The Silence of the Lambs (1991) or the burned-out brittleness of Sigourney Weaver in Copycat (1995), and you can see just how tepid Sandra Bullock is in the part.

Murder By Numbers is directed by French expatriate Barbet Schroeder. Schroeder’s body of work varies between films with strong Euro arthouse sensibility – Barfly (1987), Reversal of Fortune (1990) and Our Lady of Assassins (2000) – and more formulaic commercial product in the American mainstream – the psycho-thriller Single White Female (1992) and the remake of Kiss of Death (1995).

Murder By Numbers clearly falls into the latter category. Barbet Schroeder’s handling is merely efficient and middle-of-the-road – compare Schroeder’s clean and unremarkable stylism here to other forensic psychology thrillers like Se7en (1995), tv’s Millennium (1996-9) and 8MM (1999) and their determination to inhabit a physical heart of darkness, and Murder By Numbers seems even more lukewarm. It is a serial killer thriller where darkness never amounts to much more than a vaguely muted colour contrast.

Certainly, Murder By Numbers is well scripted. Intriguingly, it is more of a howdunnit than a whodunnit as the killers are known from the start – in fact, we are introduced to them even before we meet Sandra Bullock. Screenwriter Tony Gayton has certainly done his forensics homework, which makes for a story that is moderately absorbing in its unfolding. The basic plot of the two male friends who decide to conduct a murder as an experiment in morality reminds of Alfred Hitchcock’s Rope (1948). The film also reminds a good deal of the excellent portrait of disturbed youth River’s Edge (1986) – if you like Murder By Numbers is River’s Edge recast as a post-Silence of the Lambs forensic psychology thriller.

Like both River’s Edge and 8MM, Murder By Numbers opts for a conservative outlook on disturbed psychology. It argues that people do not kill because their fundamental thinking is subject to such abuse or isolation at an early age that they cannot function in anything other than compulsive ways or maintain normal relationships, but rather that they do so simply out of a conscious choice to be evil or a moral vacuum at the centre of their lives.

Murder By Numbers is a film that you feel ever so slightly has drawn up firm moral divides about the nature of teen crime. Here the teens are conducting an experiment in amorality and there is a speech from Sandra Bullock that comments on how they do it because they have no parental controls and live in a world where choices don’t mean anything. (This makes interesting contrast to River’s Edge, which saw a teen killing his girlfriend because he saw no future ahead). In actuality, the majority of youth crimes are unplanned and chaotic in nature. The end where Sandra Bullock condemns the teen to a life sentence with the comment “in life you have one chance and you have to use it right” cannot help but seem harsh in the circumstances – this is a film that does not believe in second chances.

The other film that Murder By Numbers makes interesting comparison to is Heavenly Creatures (1994), which similarly featured two schoolfriends deciding to conduct a murder. The comparison to Heavenly Creatures is interesting in that it shows up just how noticeably Murder By Numbers avoids dealing with or even mentioning its gay subtext. Such is there unmistakably – talk of the boys being “seduced” by the other into conducting the murder and a subplot where Ryan Gosling gets jealous and vindictive when he finds Michael Pitt is seeing a girl. However, the film just sits on it, leaving it as something that only hovers ambiguously as being possibly no more than friendship, as though the film was afraid of tackling such an issue. Other gay lovers/murderers films such as Heavenly Creatures, Swoon (1992) and Fun (1994) sympathetically side with the two lovers, as though murder was a justifiable or at least excusable as an act of defiance against a society that regards their love as forbidden. Murder By Numbers by contrast regards its teens as adults and harshly condemns them for the full moral weight of their actions.