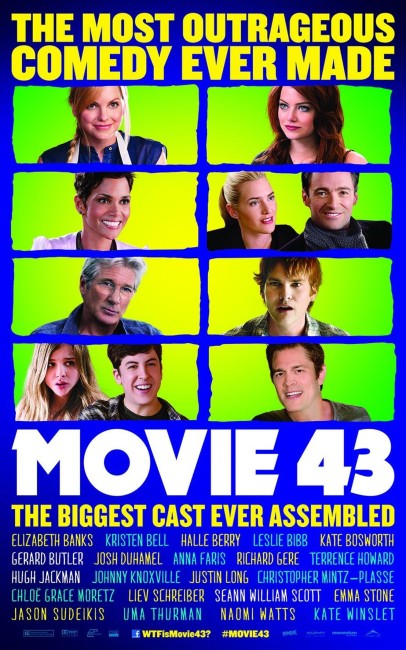 The Thread:- To pay back his younger brother Baxter for pranking them, Calvin and his friend J.J. decide to load viruses and malware onto his computer. To distract him and get to his computer, they ask his help in downloading the made-up ‘Movie 43’, a film so legendarily shocking and vile it has been banned in every country. However, their search uncovers a real such ‘Movie 43’ and people who then start making threats. The Catch:- Beth goes on a blind date with the charming and wealthy Davis but feels embarrassed by what look like a pair of testicles protruding from his neck. Homeschooled:- Robert and Samantha are determined to provide an authentic homeschool experience for their son Kevin, including reproducing school bullying and his first romance. The Proposition:- Doug goes to propose to Julie and she admits her fetish – that she wants him to poop on her. Veronica:- Neil is working night shift in the local supermarket when his ex Veronica comes through the checkout. The insults they exchange is cause for them to realise they still care for one another. Super Hero Speed Dating:- Robin has gone to a speed dating event, as also have Lois Lane and Supergirl, however Batman is determined to sabotage Robin’s every chance. Machine Kids:- A commercial to raise people’s awareness of the children that are enslaved and forced to work inside regular everyday machines like the ATM and photocopier. iBabe:- The iBabe is a new mp3 player in the form of a lifelike naked woman. The company is now facing problems with boys that have been trying to have sex with it and end up getting their penises chewed off in the fan that has been placed where the vagina is. Middleschool Date:- Young teens Nathan and Amanda are making out when she has her first period, causing panic among the men in the house. Tampax:- A commercial for the leak-proof tampon. Happy Birthday:- Pete presents his roommate Brian with a birthday present – a leprechaun he has captured. The two start torturing the leprechaun to get the location of its pot of gold. Truth or Dare:- Emily and Donald go out on a date but she is tired of fake talk and challenges him to a game of truth or dare. Victory’s Glory:- In 1958, the first all-Black basketball team go up against an all-White team and the coach tries to get them over their anxieties by convincing them they will triumph because they are Black. Beezel:- Amy moves in with her boyfriend Anson but finds that his cat Beezel has an unhealthy fixation with Anson and is trying to eliminate her.

The comedy anthology has a sporadic history on film. It began in the 1970s with films such as The Groove Tube (1970) and Kentucky Fried Movie (1977) and other efforts since such as Amazon Women on the Moon (1987), although it exists more of a television phenomenon than a film one. Movie 43 is one such effort. It was largely the brainchild of Charles B. Wessler, the producer on various Farrelly Brothers films, including Dumb and Dumber (1994), There’s Something About Mary (1998), Me, Myself & Irene (2000), Shallow Hal (2001), Stuck on You (2003), The Heartbreak Kid (2007) and The Three Stooges (2012). Wessler conceived it as an R-rated film for adults that pushed as far beyond all good taste as possible. One of the Farrelly Brothers, Peter, signed on and the film was able to get a $6 million budget. It was then shot with various directors and stars over a four-year period, much of which was determined by waiting for openings in the various stars’ schedules.

Among the directors that signed on were the likes of Steven Brill, the director of Adam Sandler’s Little Nicky (2000) and Mr. Deeds (2002), as well as Without a Paddle (2004) and Drillbit Taylor (2008), who directs one of the alternate wraparound stories in which brothers search for a banned film, as well as a segment in which CEO Richard Gere deals with a life-sized iPod modelled on a woman; Peter Farrelly, who directs The Pitch, the alternate wraparound seen in some versions in which Dennis Quaid is a crazed screenwriter trying to pitch story ideas to studio exec Greg Kinnear, as well as the segments The Catch with Kate Winslet on a date with Hugh Jackman who has a set of balls at his neck and Truth or Dare in which Halle Berry and Stephen Merchant try to dare each other to more outrageous extremes on a date; Will Graham, previously a producer/director on The Onion News Network (2007– ), delivers a segment with real-life couple Naomi Watts and Liev Schreiber taking homeschooling to the logical extent; Steve Carr, director of mainstream comedy fare such as Dr Dolittle 2 (2001), Are We Done Yet? (2007) and Paul Blart, Mall Cop (2009), handles The Proposition segment where Anna Faris admits a coprophilia fetish; actor Griffin Dunne, probably best known on this site for An American Werewolf in London (1981) and an occasional director, most notably with Practical Magic (1998), directs the segment with Kieran Culkin and Emma Stone trading insults at one another; newcomer director James Duffy handles Super Hero Speed Dating, an expansion of his earlier short film Robin’s Big Date (2005); Brett Ratner, director of the Rush Hour films and X-Men: The Last Stand (2006), directs the segment with Seann William Scott and Johnny Knoxville torturing a leprechaun; Rusty Cundieff, the African-American director of the horror anthology Tales from the Hood (1995) and various comedy tv shows, handles a segment with Terrence Howard trying to inspire the first all-Black basketball team that they will succeed “because they are Black”; while James Gunn, director of Slither (2006), Super (2010) and Guardians of the Galaxy (2014), directs the final segment with Elizabeth Banks facing an evil animated cat.

The basic conception of Movie 43 has been to take a film like Kentucky Fried Movie or Amazon Women on the Moon and play it out in the most scatological and bad taste way possible. It is surprising how far in this post South Park (1997– ) era that filmmakers have to go to get an audience offended. Not too surprisingly, critics reacted by almost universally labelling Movie 43 the worst film of the year (and it was only released on January 25). It is a film that is determined to offend in just about every conceivable way.

What is perhaps surprising about it is the calibre of the names attached to the exercise. When actresses refuse to do nude scenes lest it affect their careers, you can only wonder why it never occurred to some of those involved whether what they were being asked to play here would likewise affect their careers. You can only sit back and contemplate if maybe the producers of the film had kidnapped the various stars’ family members or were threatening to release pictures of them engaged in unmentionable acts in order to force them to participate.

To wit:- Hugh Jackman must play a scene where he appears with a pair of testicles where his Adam’s Apple should be; in the Homeschooled segment, Naomi Watts gets to play out a first romance and Liev Schreiber admits homosexual feelings for his own kid; Richard Gere is head of a corporation putting out an iPod shaped like a naked woman and ignoring incidents of teenagers getting their dicks chewed off after putting them in the fan; Chloe Grace Moretz gets to have her first period while making out – a segment that makes intriguing contrast to her taking on the title role in Carrie (2013) a few months later. Perhaps the award for extremes travelled to must go to Anna Faris who plays out a segment where she admits a fetish for being pooped on to her fiance. Admittedly some of the actors in question seem humiliated by what they are going through – the The Catch segment has both Kate Winslet and Hugh Jackman looking mutually embarrassed, although both Halle Berry and Stephen Merchant seem to take to Truth or Dare with relish.

I hate this kind of humour. It’s not about being a prude – I enjoy South Park, Jackass (2000-2) and the films of John Waters, which repeatedly set out to offend all good taste – but there is a difference between a film that sets out to outrage and one where the crude and scatological is the punchline in itself. Someone poops, farts, says a crude term, a racial or homophobic term etc and that in itself is something we are supposed to applaud and regard as funny, it is never the start of a gag. This unfortunately is where too much of Movie 43 lies – there is no sophistication or cleverness to any of it.

There is the odd segment where there is the germ of an idea – both Homeschooled and particularly the mock ads of Tampax and Machine Kids have a certain satiric cleverness to them. They are short and effective enough that they get the punch in where other segments – Victory’s Glory, iBabe – drag out an idea that it not very funny in the first place.

Hands down the very worst segment is Super Hero Speed Dating, which turns Batman, Robin, Supergirl and Superman, among other comic-book characters, into astonishingly awful caricatures. It is played out loud and campy with the actors in costumes that don’t in the slightest resemble their counterparts. The result feels like a bad amateur-hour attempt to create a Saturday Night Live (1975– ) skit. It may be the worst ever portrayal of Batman on screen – and this comes from the reviewer who will proudly claim that Batman & Robin (1997) is the worst film ever made on an A-budget.