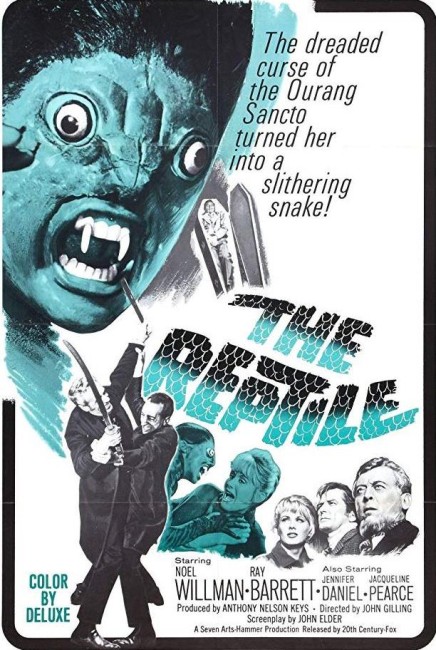 Harry Spalding, a captain in the Royal Grenadiers, inherits a cottage in a small Cornish village after his brother Charles dies in mysterious circumstances. He moves into the cottage with his wife Valerie. Harry discovers that several locals have been killed by mysterious snake bites. This is also found to have been the cause of Charles’s death. The origin of the snake killings appears to rest with Dr Franklyn who lives in the village mansion. As Harry investigates, he discovers that these are being caused by Franklyn’s daughter Anna who was abducted by a snake cult that Franklyn was researching in Borneo and that she now periodically transforms into a snake creature.

This Hammer film has obtained a reputation as a minor classic. It is almost invariably discussed in tandem with director John Gilling’s The Plague of the Zombies (1966), which he shot back-to-back with this on the same sets and using several members of the same cast. Both films are strong examples of the colonial revenge theme that rings through a number of Anglo-Horror films – others include The Stranglers of Bombay (1959) and The Ghoul (1975). In these films colonial evils – thuggee cults, dark foreign rituals – represent the same symbolic threat to British society as vampirism does in Hammer’s Dracula films – that is, it festers beneath the repressions of polite society and unleashes dangerous sensual energies.

The Reptile was made at a time when Hammer had conducted most of their variations on classic monsters and were trying to come up with new ideas. In reality, all that they did was coin new variations on the vampire – such as The Gorgon (1964) and the Reptile here. The Reptile is only Dracula with snakes. The reptile attack pattern is even identical to the vampire’s – two teeth marks at the neck – and the reptile’s end dispatch is not dissimilar to the one in Dracula/The Horror of Dracula (1958).

However, this tends to reveal the film’s conceptual limitations. The reptile’s behaviour is not logically thought out – in actuality, a snake kills its victims either when it is threatened or to have food, whereas the reptile here appears to be doing neither. In effect, it is a series of random killings that have been designed to be modeled on vampirism but that come without much in the way of supporting rationale. The climax where the reptile is killed by the smashing of a window and the letting in of cold air is incredibly wimpy.

Director John Gilling’s effectiveness is in building atmosphere. He gets good mileage out of the hoary old tropes – the villagers who refuse to talk to strangers, the town drunk who may or may not be crazy and is the only one able to give an insight into the menace.

Even better is the subtlety with which Gilling uses the genre’s expectations. Jacqueline Pearce, later to attain cult status as the intergalactic dictator on tv’s Blake’s 7 (1978-81), is painted as a threatened innocence where in fact everything that is happening to her is completely the opposite – father Noel Willman is made to seem autocratic and controlling when in fact he is trying to restrain her from attacking others; when a cat is brought to her by Marne Maitland, it is made to seem that he is threatening the cat when in fact he is offering it to her; a skin briefly-seen in her bed gives the impression that she is another victim of the reptile where in fact it is the skin she has shed.