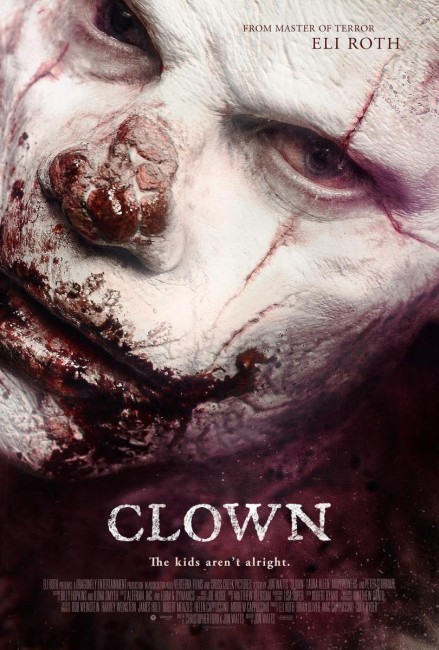 It is the birthday of realtor Kent McCoy’s son Jack and what Jack most wants is a clown at his party. Kent’s wife Meg calls to inform him that the clown they booked had to cancel. Kent then finds an old clown costume in a trunk in one of the houses he is selling. He puts it on and goes home to play the role of the clown himself. The next morning however, Kent finds that he is unable to remove the clown costume. The curly coloured hair has become his hair, while any attempts to cut the costume off end up either slicing through his skin or shattering the blade. From the former owner of the house, Kent finds that the costume is actually the skin of Cloyne, a creature from Germanic folklore that would devour children every winter. The costume now stats to possess and take over Kent’s body in order to claim the five children it needs.

Clown was a directorial debut for Jon Watts. Watts subsequently went on to the Sundance breakout hit of the wittily enjoyable Cop Car (2015) and then the big hits of Spider-Man: Homecoming (2017) and Spider-Man: Far from Home (2019). The film is written by Christopher Ford, Watt’s collaboration partner on all his films who also wrote Robot & Frank (2012) and the excellent serial killer film The Clovehitch Killer (2018).

The film was made with a promotional scheme that you have to applaud for its sheer ballsiness. Watts and Christopher Ford made a one-minute long short film Clown (2010). They uploaded it to YouTube, announcing that it was directed by Eli Roth and Executive Produced by Roth and Quentin Tarantino – despite the fact that neither Roth nor Tarantino were involved. This duly came to the attention of Roth who saw the chutzpah involved and agreed to sign on as Executive Producer to back a feature-length remake. (The link for the original trailer is listed at the bottom of the page)

That said, Clown is not a killer clown film in the sense that most of these other films are – usually featuring psychopathic and murderous clowns. Rather than any killer clowns it features a clown suit that possesses its wearer – the nearest we get to a killer clown is seeing it physically transforming Andy Powers’ features into the likeness of a clown. Eli Roth likened Clown to David Cronenberg’s The Fly (1986), which is a perfectly apt comparison in that they are both films about an ordinary man undergoing a transformation into something monstrous. The comparison that immediately came to mind while watching was with George Romero’s Bruiser (2000) in which Jason Flemyng wakes up with his face transformed into a blank white mask. (Both Clown and Bruiser also incidentally feature supporting performances from Peter Stormare).

I enjoyed Jon Watts’ Spider-Man films, the first more so than the second. They are earnest Coming of Age stories. By contrast, Clown is something much darker and at completely opposite remove. It is about an everyday family man taken over by an entity that wants to make him kill children. On the other hand, Clown is also a film that tiptoes up to crossing over a taboo line but never fully sinks its teeth into the throat. This is surely evident in the scene where Laura Allen says she will take a young girl (Emily Burley) home but leaves her at the park so Cloyne can claim her and she can have her husband back. It is a scene where we expect something horribly nasty but the film has her chicken out and never go through with such an act. Certainly, Jon Watts delivers the goods at the gore-drenched climax where Chuck Shamata has his jaw ripped off and Andy Powers tries to tear the foetus out of Laura Allen.