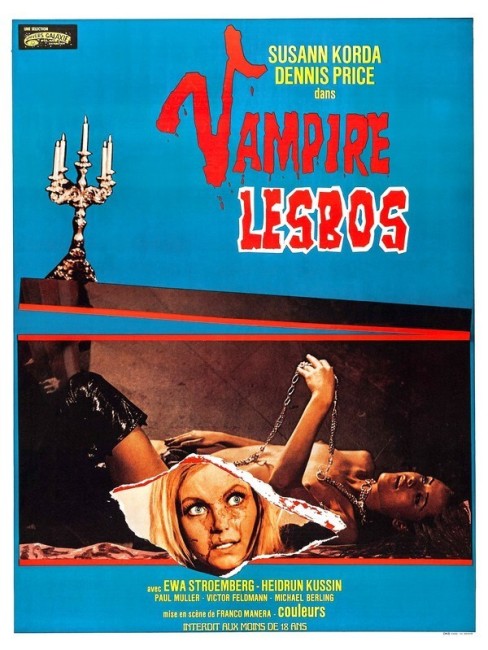 aka The Heritage of Dracula; Lesbian Vampires; The Sign of Dracula

Linda Westinghouse travels to a small island in Turkey to help Countess Nadine Carody complete an inheritance from the Draculas. The Countess turns out to be someone who has been appearing in Linda’s dreams. However, the Countess is a vampire and proceeds to seduce Linda and drink her blood.

The late Jesus or Jess Franco (1930-2013) is considered the world’s most prolific director. Between 1957 and 2013, Franco directed a purported 199 feature films. Many of these exist under a mind-boggling labyrinth of alternate titles and different cuts. His output covered a great many different genres from thrillers, spy films and science-fiction but most of all horror and erotica/pornography. Franco’s films have attained a certain cult following for their arty pretentions, although just as many of them are cheaply made. (A full list of Jess Franco’s other genre films is at the bottom of the page).

This version of Vampyros Lesbos seen here didn’t have the name of Jesus Franco on the print (rather Franco is credited by the pseudonym of Franco Manera). Certainly, if one never knew it was a Jesus Franco film such prior to seeing Vampyros Lesbos, many of the other aspects would have given it away – Franco regular Dennis Price, the softcore sensuality with pretensions towards artiness and the Istanbul locations where Franco shot many of his films around this time period. Jesus Franco was the world’s most prolific director and made nearly 199 films during his lifetime. He moved through genres such as action, comedy, the spy film, the historical saga and science-fiction, but most of his works seemed to centre around porn, horror and sadistic exploitation. (See below for Jesus Franco’s other genre films).

Vampyros Lesbos was one of a series of softcore lesbian vampire films that came out around the same time, including the likes of Hammer’s Karnstein trilogy begun with The Vampire Lovers (1970), The Velvet Vampire (1971), The Blood Spattered Bride (1972) and the arty Daughters of Darkness (1971). Vampyros Lesbos is a softcore lesbian take on Dracula (1897) – a story that Franco notedly made a straight adaptation of the same year with Count Dracula starring Christopher Lee. The first half of the story is taken direct from Jonathan Harker’s trip to Transylvania in Dracula – here Ewa Stromberg travels to an island off Istanbul where she is seduced by Soledad Miranda’s lesbian countess. Upon her return, she is placed in the Seward asylum where Seward becomes amalgamated into the role of Van Helsing and Ewa Stromberg then takes on the Mina Harker role. There is even a female equivalent of Renfield, played by Heidrin Kussin, which, given the film’s lesbian interpretation, offers intriguing insight into the character and his peculiar worship of Dracula.

Like most of Jesus Franco’s horror outings of the period, Vampyros Lesbos is a softcore film shot through with artistic pretensions – the likes of a mimed stage play with nude girls and strange cuts away from softcore/vampiric action to bugs crawling and blood drops spattered on a window. There is also a spacey musical score. The film is shot in excellent colour, which does make it look better budgeted than many of Franco’s other films.