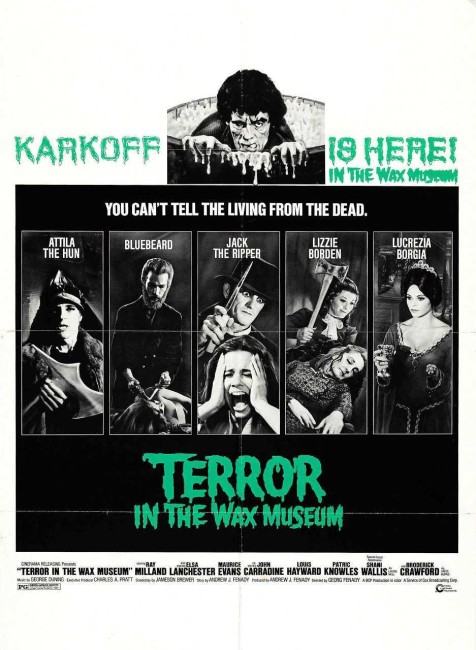 Wax museum curator Claude Dupree is murdered by what would appear the Jack the Ripper exhibit in the museum apparently come to life. With the lack of a will, his niece Meg Collins inherits the museum. Her guardian Julia Hawthorn takes control and reopens the museum, exploiting the sensationalism of the murder. However, the killings continue.

Directorially, the film is dull and lacking in any atmosphere. The cobwebbed plotting holds no surprises whatsoever – even the contrived final revelation makes no sense. One can hear the arthritic creaks as both the plot and cast of genre veterans go through their paces. This certainly includes an impressive line-up of name such as Ray Milland; John Carradine, one of the most prolific B movie actors of all time; and Elsa Lanchester, the Bride of Frankenstein (1935) herself.

Terror in the Wax Museum was produced by no less than the production company formed by Bing Crosby – who produced a number of other horror films around this period, most notably the rat epic Willard (1971), Arnold (1973), The Stranger (1973), W (1974) and The Reincarnation of Peter Proud (1975).

The film was directed by Georg Fenady who worked regularly as a tv director between the 1960s and 90s. His one other theatrical film was the horror film Arnold (1973). George and his brother Andrew J. Fenady were tv producers, known as creators of the show The The Rebel (1959-61) and producer of Branded (1965-6). The Fenadys also dabbled in several genre tv movies with Black Noon (1971), The Woman Hunter (1972) and The Stranger.