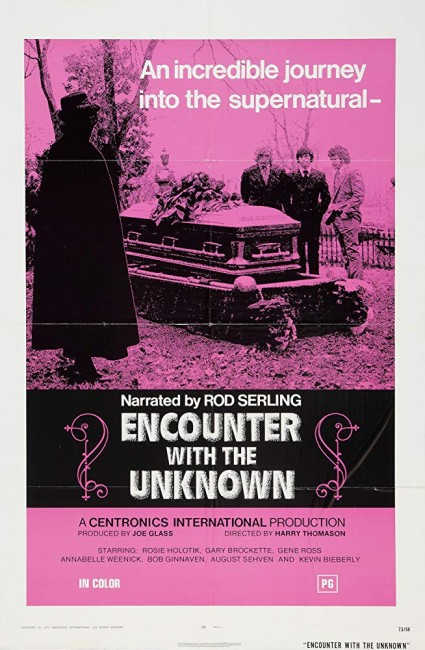 1:– Three college guys play a prank on the less socially clued-up John Davis, telling him they are setting him up with a girl but instead sending him to a randomly selected address. When he arrives, the door is answered by Mrs Wilson. She is holding a gun that her husband left her for self-defence, which accidentally goes off and kills Johnny. At the funeral, Johnny’s mother gives an ominous warning to the three guys. As Frank Cameron confesses to a priest on a plane, this means that every seven days so far one of them has met a fatal death. 2:– Rural Massachusetts, 1906. Young Jess goes into the woods in search of his missing dog and discovers a hole in the ground out of which comes a terrible moaning sound. The locals gather to decide what to do about the hole, believing that it holds a great evil. 3:– A senator driving home at night comes across a girl standing alone on a bridge. This is Susan who comes from a wealthy family and eloped with her boyfriend Paul after her father decided he was not right for her.

Encounter with the Unknown is an anthology film. There have been plenty of these over the years – from the classic Dead of Night (1945) through the Amicus anthologies of the 1960s/70s beginning with Dr Terror’s House of Horrors (1965) to modern equivalent like The ABCs of Death (2012) – and this is a particularly undistinguished variant. It was regionally made and peopled and cast with complete unknowns. In fact, the only known name anywhere throughout is Rod Serling, once the host of tv’s eerie anthology series, the original The Twilight Zone (1959-63). Serling, who died only two years later, appears to have taken the job because he needed the money – around the same time, he was taking other clearly cash assignments and appearing in commercials, narrating several fringe science documentaries such as In Search of Ancient Astronauts (1973), Monsters! Man or Myth (1974) and The Outer Space Connection (1975), and hosting tv gameshows. He has been employed to do exactly what he did on The Twilight Zone and deliver the same whimsically speculative narration in the tones of a 1940s newsreel presenter.

You are used to anthology stories that are compact and tightly told, usually building to a sting in the end of the tale. By contrast, the episodes in Encounter with the Unknown are singularly drab and uninteresting. They suffer from a directorial pace that is plodding to the point of soporific. The first episode has an eminent predictability to it. We are told that the three guys are going to die, even the means whereby they will die, and the entirety of the episode consists of waiting for this to happen. There is not even any panic on their part or dramatic struggle to prevent their fates from occurring.

The second story is mildly more interesting in its tale of a hole in the woods that moans. Crucially though, there is much talk of how the locals regard the hole in the woods as a place of evil but there is nothing done in terms of direction to ever relay this. The episode suggests something of an H.P. Lovecraft story, particularly in the final image of the father driven insane by whatever he encountered down in the hole but Lovecraft’s feeling of dread and of horrors beyond ordinary human ken could not be further away from anything in the film.

The third episode is a ghost story that the film lets fall through its fingers. Again, there are elements that had potential – the mystery surrounding the girl’s appearance on the bridge, the reasonably detailed character conflicts in the flashbacks to tell her story – but the film mangles them. The flashbacks go on far too long – where the scenes with the young eloping couple together even come to the accompaniment of a folk song on the soundtrack – and the film flubs what should have been an eerie payoff.

The film winds up on a long piece of end narration – one that goes on for some ten minutes during which it recaps the essentials of each story for us to build its thesis. (It should be pointed out that the opening and end narration come from someone other than Rod Serling). Certainly, the opening narration, which talks about the theories of the fictitious Dr Jonathan Rankin and how he traced every uncanny happening to a mere score of cemeteries, sounds intriguing. On the other hand, the loooong end summation, which makes the rather incredulous claim that thousands of people are turning to witchcraft in the US and that the knowledge they are discovering comes from Atlantis and the Egyptian Book of the Dead, ends up in hopeless whackadoodle territory.

Harry Thomason subsequently went onto direct other low-budget genre films such as the psycho-thriller So Sad About Gloria (1975), The Day It Came to Earth (1977) and Revenge of Bigfoot (1979). Throughout the 1980s to the present, Thomason has worked as a tv producer.