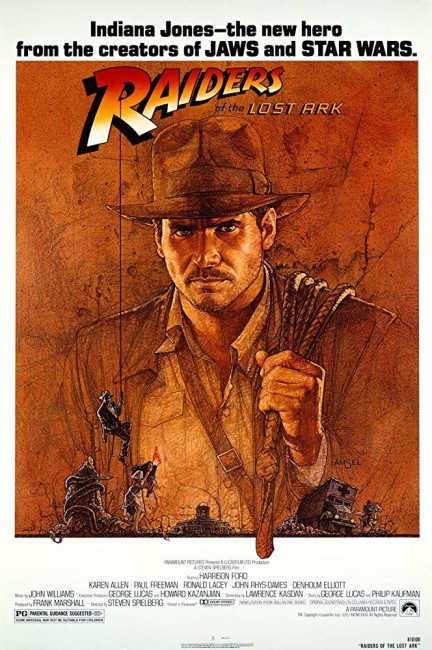 It is 1936. Archaeology professor Indiana Jones is recruited by the US government to find the Lost Ark of the Covenant, which once contained the tablets that the Ten Commandments were written on. According to legend, The Ark has vast power that will make any side that possesses it invincible and the American government wants to find it before the Nazis who have also begun their own quest. Indiana goes to Nepal to meet his old girlfriend Marion Ravenwood who has the medallion that leads to the location of the Ark. Hotly pursued, they travel to Cairo in a race to find the Ark before the Nazis do.

Raiders of the Lost Ark began life as a holiday taken in Hawaii by good friends George Lucas and Steven Spielberg in 1977. Lucas was fraught with uncertainty and the belief that his about-to-open film Star Wars (1977) would be a flop. On the beach, the two reminisced over the old serial adventures of their childhood and dreamed of recreating them on the big screen. Of course, Star Wars went crazy that summer, a few months later Steven Spielberg had a colossal success with Close Encounters of the Third Kind (1977) and suddenly escapist adventure and fantasy was back in again in a big way, with the two friends riding at the forefront of this success. A few years later, the two reteamed to create their mutual reminisce, which became Raiders of the Lost Ark. With their box-office Midas Touch, Raiders of the Lost Ark became the then fourth highest grossing film of all time. (The two of them incidentally held the then foregoing three spots between them as well).

Their idea was turned into a script by Lawrence Kasdan, who was then a novice writer for hire under George Lucas’s aegis and had just tuned the script for The Empire Strikes Back (1980). Later that same year, Lawrence Kasdan would go onto considerable acclaim of his own as a director with the highly acclaimed film noir Body Heat (1981) and follow it up with hits like The Big Chill (1983), Silverado (1995), Grand Canyon (1990) and Dreamcatcher (2003). [The script also had input from Philip Kaufman, director of Invasion of the Body Snatchers (1978), The Right Stuff (1983) and Quills (2000), although Kaufman’s exact contribution is unclear]. Spielberg and Lucas cast Harrison Ford, who was just starting to realise his star potential as a result of the Star Wars films.

Raiders of the Lost Ark is largely construed as a series of the action scenes that Lucas and Spielberg dreamed of seeing up on the screen. You could easily imagine the film as a twelve-part adventure serial – each half-hour episode would end on a particular cliffhanger where Harrison Ford’s life was in danger. The film has no other pretension than being a kinetic ride that impels the audience from one dramatic, suspenseful high to the next. As such, it is a breathless series of wall-to-wall action sequences. The film hits in from the first moment and rarely lets up until the end credits.

The opening scene is set with a rollercoaster-paced opening sequence involving Indiana’s venture into a temple, having to face treacherous native guides, poison arrows, hidden pits, tarantulas, giant rolling boulders and finally a ruthless rival. Where in most movies this would be enough to serve as the climax, this only proves to be an extended teaser with little relation to the plot to come. The rest of the film is an exhilaratingly kinetic race from one action set-piece to the next – Spielberg stages some superb set-pieces, including a fist-fight around the underside and propellers of a grounded plane; and a recreation of Yakima Canutt’s famous stunt-sequence from Stagecoach (1939) with Harrison Ford crawling along the underside of a moving truck.

One might compare Raiders of the Lost Ark to modern action films that clearly draw from its influence, such as The Mummy (1999) and sequels and Lara Croft, Tomb Raider (2001). In comparison, everything here comes with a natural energy rather than a series of mechanically grafted cookie-cutter sequences designed solely to batter audiences with kinesis and wonderment. Raiders of the Lost Ark is a film that communicates a genuine sense of fun. It has no pretension other than to be an exhilarating action film and yet it is one where all the elements came together so well that many people consider it an all-time classic. It was even nominated for that year’s Best Picture Academy Award.

The casting in the film is great. Harrison Ford is perfect, playing with a wry, grizzled humour and instant likeability. Indeed, Raiders of the Lost Ark was the film that confirmed Harrison Ford as a major star. [It is intriguing to speculate what would have happened had the film been cast with Spielberg and Lucas’s original choice of Tom Selleck, who declined because of his commitment to tv’s Magnum PI (1980-8). Ironically, Tom Selleck later turned up as the hero in a lame Raiders copy, High Road to China (1983)]. When it comes down to it, Indiana Jones is an everyperson’s hero. Unlike James Bond, to whom he is often compared, Indiana Jones is a grizzled real world hero – he gets dirty, frequently beaten up, never saves the day through his own cool, the nearest to a gadget he wields is a bullwhip and the girls who swoon over him are not supermodels and sex kittens but schoolgirls with puppydoggish infatuations.

Karen Allen holds her own well against Harrison Ford. The two of them click in a marvellously prickly relationship that works like some classical Bogart-Bacall combo. Allen is maybe a little too quiet and introverted as an actress but the part is imbued with such spunk in the writing that we hardly even notice. The opposition is well filled by Paul Freeman’s champagne villain and the leering asthmatic menace of a scene-stealing Ronald Lacey.

The canniness and a large part of the success of Star Wars was that George Lucas made a movie that was a collage of its’ audience’s collective movie-going experience. Star Wars consciously draws upon the experience of WWII movies, Tarzan films, Flash Gordon serials and Westerns. Raiders of the Lost Ark is infected with the same knowing recreation of past films. It not only distils and rehashes the adventure film but is constantly playing into our expectations of the genre – Spielberg sets up scenes where we think we know what will happen because he we have seen countless adventure films, before he turns away and jokingly reveals something else. In one scene, villain Ronald Lacey leeringly pulls a rod and chain out of his pocket in front of an imprisoned Karen Allen – one cringes expecting the worst, before it is anti-climactically revealed to only be a collapsible coat hanger. The opening shot is a wonderfully playful dissolve from the familiar image of the Paramount logo to that of a Peruvian mountain (a shot that became a trademark for the subsequent films in the series).

The scene that gets the biggest laugh from an audience and has gone on to become regarded as a classic movie moment is the one where Harrison Ford confronts an Arab assassin twirling his sword in an impressive display of intimidation and instead pulls out his gun and dispatches him with a bullet. (The scene was apparently improvised – Harrison Ford was suffering from diarrhoea as a result of the Tunisian sanitation and so Spielberg junked a more elaborate confrontation and shot this instead). Again, it is a scene that plays into and wittily subverts an audience’s knowing sense of movie cliches.

There are occasional moments where the seams show through. The Ark is only what Alfred Hitchcock called a McGuffin, a plot device to drive everything else. Sometimes the plot shows through thinly – you do tend to ask questions like how Indiana managed to survive a journey across the Mediterranean by hanging onto the conning tower of a submarine from the outside. The end of the film with the villains being dispatched by a display of effects is a vaguely unsatisfying conclusion after the build-up.

Steven Spielberg, George Lucas and Harrison Ford made two sequels (or rather prequels) to Raiders of the Lost Ark – Indiana Jones and the Temple of Doom (1984) and Indiana Jones and the Last Crusade (1989). While both have their fans and even those who argue the merits of their superiority over Raiders of the Lost Ark, they are not as much fun. Neither has a unifying strength – they often seem an incoherent hodgepodge of action scenes with little driving force and only Harrison Ford’s grizzled charm holding the show together. George Lucas later spun out a tv series The Young Indiana Jones Chronicles (1992-3). The conception of the series had changed markedly from what it was in the films – where the films were high adventure with strong fantasy content, the series was soberly realistic and non-fantastical, as though it had been made to present history to teenagers in dramatic form. Although earnest, the contrivations of the plots that required the youthful Indiana to meet a famous historical personage every week – hearing ghost stories from Lawrence of Arabia, escaping prison with Charles de Gaulle, playing pranks on Picasso, having a fling with Mata Hari and so on – verged on the laughable. Indiana was shown as a teenager (played by Sean Patrick Flanery), a child (played by Corey Carrier) and as an old man (played by George Hall). A fourth Indiana Jones film was talked about for nearly two decades with numerous scripts written and rejected, before finally emerging as Indiana Jones and the Kingdom of the Crystal Skull (2008). Also of interest is Raiders of the Lost Ark: The Adaptation (1989), a shot-for-shot remake conducted by two teenagers, as well as Raiders! The Story of the Greatest Fan Film Ever Made (2015), a documentary about the making of their film.

There has been the persistent insistence in calling the film Indiana Jones and the Raiders of the Lost Ark, although that is not the name on screen and this seems a mislabelling the retrofits the title on the assumption that all of the sequels are named after Indiana Jones.