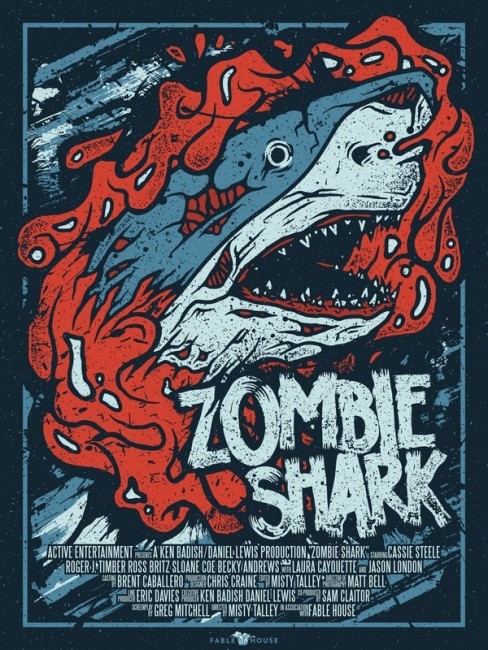 Amber Steele’s boyfriend Jenner Branton takes her on a weekend getaway to a resort on Redplum Island. Because he has bought a discount deal for four, he also asks along her sister Sophie and Bridgette, another waitress from the restaurant where all three girls work. They arrive on the island to find the resort considerably less than expected. A dead shark is then found washed up on the beach. When Jenner goes to pose for a photo next to it, it comes back to life and devours him. The sheriff and others are killed in short course. With a storm closing in, the others are unable to radio for help from the mainland but luck onto a military channel. Their call is answered by Maxwell Cage, a sergeant stationed at the scientific research base on the island. From Maxwell, they learn that Diane Palmer has been conducting experiments at the station in the regeneration of dead tissue using sharks. However, her test subject Bruce has made an escape. It has become a zombie shark, turning other sharks into the zombies. As the group tries to find what refuge they can against the menace, they realise that the zombie shark bites are also turning people into zombies.

You can see the thinking that has gone on here – why not combine the two most popular B movie fads of the 2010s, the gonzo killer shark film and the zombie film? Alas, while you can see that this was an idea and a title that the writer/producers could instantly sell, nobody put much thought into how it might work. A zombie shark prowling about doesn’t look too different to a regular shark. There is one scene early on where a dead shark washes up on a beach and startles everybody by returning to life and a couple of other minor scenes with a still-alive severed shark’s head.

However, the film seems to have run out of any ideas about what to do with zombie sharks after that point. To justify the concept, the script also sees the need to throw in some contrivation about the zombie shark turning the people it bites into zombies too, although these never feature much throughout either. You could have fairly much excised the word zombie from the film and just had a regular killer shark film.

Zombie Shark is a strictly average entry in the gonzo killer shark fad. The effects are nothing great, which is standard for all the abovementioned gonzo killer shark films. The cast are all unknowns with the exception of Jason London. Director Misty Talley doesn’t plant her tongue in cheek as absurdly as the Sharknado series but does so sufficiently to overcome many shortcomings. There are various entertainingly absurd scenes with shark heads flying through the air to land on people, sharks jumping out of the water to gash Jason London with their fins as he passes and so on. And the odd amusing line like: “Why do those people keep coming to the water? They’re setting up a zombie shark buffet.”