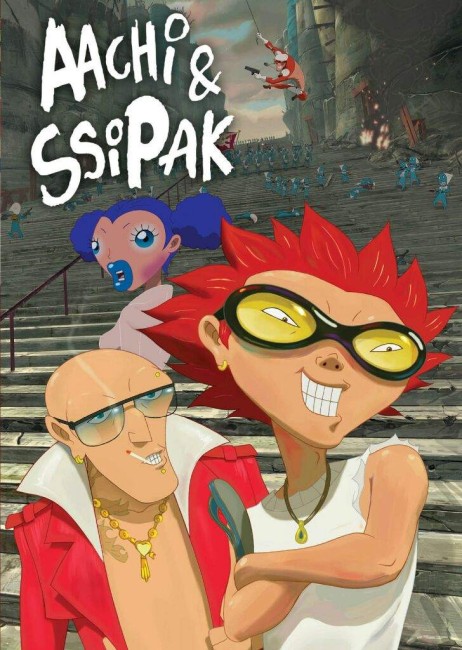 In the future, a new world has been built using recycled human excrement as building materials. People are encouraged to excrete regularly with highly addictive Juicybar popsicles being given as rewards. However, the Juicybars have created miniature blue-skinned mutant offspring. The mutants have organised into a terrorist army known as The Diaper Gang and are conducting armed raids to obtain more supplies of Juicybars. The Chief who runs the city has unleashed a fearsome cyborg motorcycle cop known as Geko to deal with Diaper Gang raids. Meanwhile, Aachi and his dim-witted best friend Ssipak are trying to make a living dealing Juicybars. Their Juicybar addicted friend Jimmy, who wants to be a director of pornographic films about excretion, is forced to recruit an actress for the Diaper Gang leader’s plan. This happens to be the blue-haired Beautiful whom Ssipak has fallen for at first sight. The Diaper King has her implanted with multiple anal id tags so that they can collect hundreds of Juicybars every time she goes to the toilet. Aachi and Ssipak rescue her back and, upon discovering her new ‘talent’, become instantly wealthy Juicybar entrepreneurs. As both The Chief and the Diaper King come after her, Aachi and Ssipak become caught up in the war that erupts between both sides.

From the late 1990s onwards, South Korean cinema has exploded onto the international stage. Part of its success has been a willingness to borrow stylistically from all other genres of Asian cinema out there. There have been numerous South Korean attempts to copy the Japanese horror cycle of Ring (1998) et al. The Koreans have experimented with other genres to varying degrees of success – perhaps the greatest successes that Korean cinema has had has been in the attempt to create their own equivalent of the hard-boiled Hong Kong crime thriller. Out of this, there have been a number of Korean directors to have attained international acclaim in recent years, including Boon Jong-ho, Kim Ki-duk and especially Park Chan-wook after the amazing Oldboy (2003).

In the sense that much of South Korean cinema can be seen to be trying to borrow from other genres of Asian cinema, then Aachi & Ssipak is a Korean attempt to create the equivalent of a Japanese anime. (Aachi & Ssipak is one of the few Korean feature-length animated films. There have been a handful of others stretching back to the 1980s, although Korean animation studios are most known for their outsourcing for various Hollywood production houses).

Aachi & Ssipak comes with a deranged energy. It is a film that seems to be trying to be the anime equivalent of an underground comic-book and is determined to be way out there, offensive and trippy. The nearest equivalent might be to imagine something like a science-fictional version of early Ralph Bakshi works like Fritz the Cat (1972) or Heavy Traffic (1973).

Director Jo Beom-jin is determined to be in audience’s faces. You get the impression that Aachi & Ssipak has been made by a group of deranged coprophiliacs who are determined to rub our faces in it – a constant obsession with shit and matters anal runs through the film, be it a satirical future where excrement has become the building block and indeed the currency that everything runs on, to a character that seems to have stepped out of a Blaxploitation film and seems obsessed with making anally-related pornographic films. (All of this does make one wonder what exactly runs through the minds of the creative talents behind the film. Although on second thoughts, I am not sure if I want to know).

Outside of its scatological fixations, Aachi & Ssipak has a madly revved energy that hits at full speed and keeps going. The plot is constantly shifting between various factions with whiplash speed to the point it becomes difficult to tell what is going on. Added to the mix, there are numerous eruptions of ultra-violence and a heap of drug-induced hallucination scenes. Not to mention a number of satirical jibes at pop culture and other films – a laxative commercial enacted by various Mickey Mouse lookalikes; a sequence that turns Misery (1990) into some kind of demented S&M porn film; the heroes and Jimmy turned into smutty look-alikes of Batman, Robin and Superman; a hallucinatory take on Aliens (1986); and snide jibes about Paris Hilton.

Initially, Aachi & Ssipak seems to be fuelled by a mad energy and a real out-there creativity. However, after about the twenty minute mark, all the in-your-face determination to assault the audiences with taboo defiance and the constant shifting and sidetracking of the plot ends up exhausting you. Indeed, at the film festival where I saw Aachi & Ssipak, it had the most audience walkouts of any film screening according to management.

On the other hand, just when I was getting bored, Aachi & Ssipak started coming together dramatically suddenly about the halfway point. Jo Beom-jin demonstrates unexpected strengths in terms of directing animation action. (Indeed the animation throughout is of a surprisingly high quality). There are some exhilarating action set-pieces with the cyborg cop Geko taking on a horde of the Diaper Gang on and around a set of steps; the opening sequence where the Diaper Gang conduct an armed raid on an armoured vehicle and are despatched by Geko; and especially the climactic scenes with two mining cars racing through an underground complex with Beautiful stretched between them. Everything goes out on a standard anime-styled big mass destruction explosion. It is in these scenes that Aachi & Ssipak starts to work.