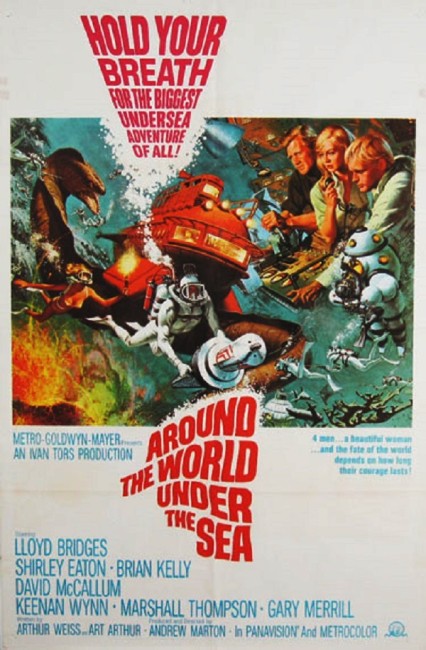 A team of six scientists are brought together, some reluctantly, to crew the new experimental submarine The Hydronaut. It is planned that The Hydronaut will travel around the world on its maiden journey and place a series of early warning earthquake sensors on the ocean floor. However, once underway the mission is thwarted from within – frayed tempers between two men wanting the same woman – and from without – by giant eels and a necessary dive on a live volcano.

Around the World Under the Sea was one of a host of underwater sf films made during the 1960s. The genre had begun with Irwin Allen’s Voyage to the Bottom of the Sea (1961) and the popular tv series spun out from it Voyage to the Bottom of the Sea (1964-8). Other entries in this cycle included The Underwater City (1961), Destination Inner Space (1966), The Neptune Factor: An Undersea Odyssey (1972) and the Gerry Anderson tv series Stingray (1962-4), while this film’s producer Ivan Tors also had great success with various non-genre ocean-based tv series such as Sea Hunt (1958-61) and Flipper (1964-8). In many ways, it can be see that these films were exploring underwater reaches or ‘inner space’ in much the same way as the US Space Programme was making great strides in the exploration of Outer Space during the same era.

Ivan Tors had emerged in the 1950s with a handful of science-fiction films – The Magnetic Monster (1953), Gog (1954), Riders to the Stars (1954) and the tv series’ Science-Fiction Theater (1955-7) and Men into Space (1959) – before gaining fame as the producer of various nature-based tv series such as the aforementioned Sea Hunt and Flipper, Daktari (1966-9) and Gentle Ben (1967-9). Here Tors even recruits stars from his various tv series – Lloyd Bridges from Sea Hunt, Brian Kelly from Flipper, Marshall Thompson from Daktari, as well as several other hot young names from the era, including teen heart-throb David McCallum from tv’s The Man from U.N.C.L.E. (1964-8) and Shirley Eaton, who attained fame as the girl painted in gold in the James Bond film Goldfinger (1964).

Around the World Under the Sea is modestly effective. Unlike the Voyage to the Bottom of the Sea tv series, it actually went out and shot underwater rather than in a tank. The underwater photography, supervised by diver Ricou Browning who played The Creature from the Black Lagoon (1954) and directed the diving work in the James Bond film Thunderball (1965), is highly impressive. Unlike the wooden melodramatics that routinely took place in Voyage, the underwater scenes are conducted with a great deal of realism. Not to mention that in comparison to Voyage, the model effects are also quite convincing.

David McCallum and Keenan Wynn in particular give fine performances, although Brian Kelly and Shirley Eaton are wooden. (Director Andrew Marton seems to have a peculiar fascination with Eaton’s legs, focusing on them or having people comment on them more than he ever does her face).

The problem with the film is the story – the idea of dropping sensors on the ocean floor around the world is not a very exciting one and once all the crew have been gathered aboard the submarine not a lot happens. Thus the film has to create artificial dramatic devices such as exploding volcanoes, giant eels and sexual tension aboard the submarine to drum up drama. Perhaps what Around the World Under the Sea needed far more was a central menace – a traitor from within or some nemesis or monster from without.

Director Andrew Marton was an emigre from Hungary who had worked as a director there since the silent era. In Hollywood, he gained fame as a second-unit director on films such as Ben Hur (1959) and Cleopatra (1963). He made a number of English-language films, mostly in the adventure category, the most well-known of which was King Solomon’s Mines (1950). In the 1960s, Marton began working on various Ivan Tors tv shows and directed several Tors-produced films, as well as two other science-fiction entries with the End of the World film Crack in the World (1965) and the comedy Birds Do It (1966).