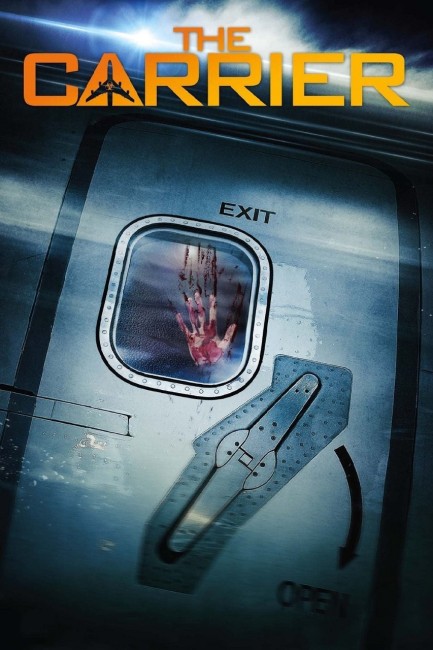 The world has been overrun by a deadly plague that is killing the population en masse. A group of ten uninfected people manage to get away from London aboard a 747 flown by Captain Tobias Black. He is hoping to make it to Greenland, which is believed to be free of contagion. However, signs of infection show up among those on board. Ruthless actions are taken from quarantining the infected on the economy deck to severing arms before infection spreads. The need for refuelling forces them to land at an airport but this leaves them open to attack by the infected that have seen the plane land and are desperate to hijack it. Meanwhile, tensions among those on board and fights over necessary courses of action create divisions, which place them in further peril.

The Carrier was the second feature film from British director Anthony Woodley. Woodley had first appeared with the low-budget science-fiction film Outpost 11 (2012) and subsequently made the non-genre The Flood (2019).

There have been a good many films on the theme of plague outbreak – see the likes of Outbreak (1995), Contagion (2011), Flu (2013) and the recent British Containment (2015) to name but a handful. These are such that the genre has developed its own cliches and formula. Like a certain number of other genre themes – the zombie film, the disaster movie, the ghost story – any new entry into the field comes out of the starting gate with the problem of having to find something new to do in order to stand out.

The Carrier works well because it does do something different with the plague outbreak drama. Namely, that the majority of the drama is contained aboard a plane (and expanded to an airport runway during the latter half of the film). This gives the film a strong dramatic hook as it starts – of the group escaping from what we are told is a pandemic on the ground below (the confinement of the drama aboard the plane economically allows the filmmakers to avoid depicting any of this) only to find that those on board are infected and the problem of how to isolate them without allowing it to carry to the rest of the plane. (The film never seems to specify how the infection is spread – clearly not airborne as the survivors deal with it by merely confining the infected to the economy section. Although it does not seem to blood or contact borne either in that people conduct surgery to remove the arm of one of the infected without any kind of protection. This is also a DIY arm removal that for some reason fails to end up with massive arterial blood spray all over the near vicinity).

The script works rather well. It is a well-contained drama and keeps turning with a series of tight twists and betrayals. One of the best sections is the one where another plane is spotted in the sky and the captain Edmund Kingsley strikes up a flirtatious relationship with its pilot (Josie Taylor) and they make plans to combine forces, only for this to come to a tragic ending. There is also some excellent tension and development during the latter scenes landed at the airport and the attempt to refuel amid incursions from the infected and betrayal from within the group. The film’s medium budget is made somewhat evident by some occasionally obvious digital effects of the planes flying and burning cities in the background but the show otherwise holds up extremely well.

The only disappointment was the ending. [PLOT SPOILERS]. Here we end up with the two (it is implied) potential lovers Jack Gordon and Zora Bishop reunited on the runway after the plane takes off without them. However, as the entire thrust of the film has made clear, exactly what kind of upbeat ending could this be with the two of them left in a world that has fallen into anarchy and lawlessness, not to mention holds the imminent possibility of infection? The other strand of plot is seeing captain Edmund Kingsley taking off in the plane alone, only to be confronted by the one passenger aboard he (and we) have forgotten and find that he is now infected. It is a case where the moral satisfaction of a just desserts ending is allowed to trump the far stronger dramatic thrust the film has built up of wanting to see the survivors get to safety.