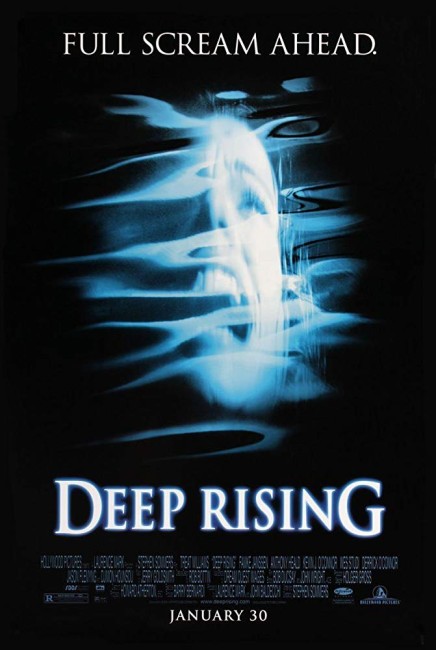 The sea captain Finnegan has his boat chartered to take a group of men out to a rendezvous point in the middle of the ocean. He discovers part way through the journey that the men are in fact a group of heavily armed mercenaries. They arrive at their destination, the brand-new luxury liner The Argonautica, and Finnegan realises that the mercenaries have been hired to destroy it. However, upon boarding The Argonautica, they find it floating adrift with the crew and passengers slaughtered. They encounter a handful of survivors, including the beautiful thief Trillian St James and the boat’s treacherous designer Simon Canton. They then discover that what killed everybody was tentacular creatures that have risen from the ocean depths. Now the creatures come after them.

Alien (1979) is one of the undisputed modern genre classics. It had enormous influence on the genre. There were dozens of cheap Alien copies made throughout the 1980s, filled with hordes of slime-drooling, H.R. Giger-lookalike alien nasties, evolved bugs and escaped laboratory experiments pursuing humans through dark corridors. Eventually any B movie sub-genre that stays around long enough gets reworked on a big budget and such was the case in the late 1990s when filmmakers started doing Alien copies on big budgets with the likes of Species (1995), Mimic (1997), The Relic (1997), Virus (1999) and Supernova (2000).

Deep Rising was one among this mini-genre of big-budget Alien rehashes. You can almost see the way that Deep Rising was pitched – as being Aliens (1986) meets Titanic (1997). In fact, Deep Rising is so second-hand generated that it is not merely a copy of Alien as much as it is a copy of the mini-spate of Alien at sea and underwater copies – it could almost be an A-budget rehash of Deepstar Six (1989).

Deep Rising was the fourth film of director Stephen Sommers. Sommers debuted with the high-school drama Catch Me If You Can (1989) and the well received The Adventures of Huck Finn (1993) then conducted the surprisingly good live-action remake of The Jungle Book (1994). Subsequent to Deep Rising, Sommers went onto the enormous success of The Mummy (1999), followed by the likes of The Mummy Returns (2001), Van Helsing (2004), G.I. Joe: The Rise of the Cobra (2009) and Odd Thomas (2013).

While The Jungle Book in particular showed Stephen Sommers as a promising director, Deep Rising, Van Helsing and the Mummy films allow him spectacularly large budgets and show him off at his worst. With Deep Rising through Van Helsing, you can trace the escalation of Sommers’ budgets and in each case the escalation of the scale of the film, with the visual effects coming to occupy greater and greater prominence at the expense of story, seriousness or even basic credibility.

Deep Rising is a film that almost exists down at the level of Golden Turkey material. The characters are glib, one-dimensional caricatures. The mercenaries display no characterisation beyond their racial diversity and are all killed off in decreasing order of their reprehensibility and cowardice. Characters do thing for stupid reasons – Anthony Heald builds a $400 million yacht and then we are asked to believe hires a team of mercenaries to wreck it on its maiden voyage for the insurance money.

The dialogue when it is not being cliched – “I’ve got a bad feeling about this” – is just inane – “The hulls on these ships are impregnable.” “What’s that mean?” “The hulls on these ships are impregnable.” In all of this, Treat William gives an annoying performance – he seems less like an action man than a stand-up comic thrust into the middle of a big spectacle where he has to keep throwing in cocky jibes.

The creatures look impressively lethal – and exactly like one big CGI effect. The film is an insistently spectacular effort with its array of big guns, explosions, rupturing hulls, giant creatures and mass shootouts – and ultimately tedious. The climax – with Treat Williams and Famke Janssen racing around at high-speed on a jet bike inside the ship as it is exploding, pursued by a mass of tentacles and somehow managing to escape by hitting the controls of elevator doors with shotgun blasts while travelling at high speed – is one point where Stephen Sommers allows Deep Rising to reach a point of total ludicrousness where you can no longer take any of it seriously any longer.