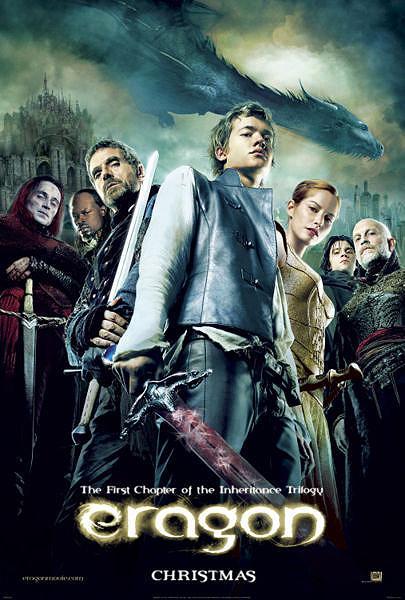 In the land of Alagesia, the tyrant Galbatorix has deposed the Dragon Riders and killed all of the dragons before declaring himself king. Eragon is an orphan farmboy raised by his uncle in the village of Carvahall. While hunting in the forest, Eragon comes across a mysterious egg. He takes it home where it hatches a baby dragon. The dragon, Saphira, immediately bonds with Eragon and he discovers that he can telepathically communicate with it. However, Galbatorix and his sorcerer Durza the Shade send the vile Ra’zac creatures forth to find and kill Eragon. Eragon flees in the company of the village storyteller Brom. Along the way, Eragon learns that Brom used to be a Dragon Rider. Brom starts to teach Eragon in the ways of the Dragon Riders. As they head to join the Varden rebels in their mountainside stronghold, Eragon hears the call of the princess Arya, held prisoner by Durza. He chooses to ignore Brom’s warnings to go to her rescue.

When J.R. Tolkien wrote The Lord of the Rings (1954-6) little did he know that he was laying the cornerstone of the modern fantasy publishing industry. By the 1980s, the Tolkien-styled epic fantasy had become its own publishing niche. There were numerous imitators of Tolkien – most famously the likes of Lloyd Alexander, Terry Brooks, Hugh Cook, David Eddings, David Gemmell, Terry Goodkind, Robert Jordan, Mercedes Lackey, Melanie Rawn, Tad Williams and Janny Wurts, even generic sharecrop works like the Dragonlance and Elfquest series. All of these authors drew heavily on the templates that Tolkien had laid down – of imaginary lands, which come with detailed maps published at the front of the book, back histories and languages; quests to fulfil ancient prophecies led by a fellowship made up of different races; the array of wizards, trolls, halflings and princesses, not to mention the dark lord that threatened the land. These elements of the fantasy epic became so generic they were able to be recycled as an entire role-playing game – Dungeons and Dragons (1974) and several imitators – and then spoofed in great detail by authors like Terry Pratchett.

Eragon is based on a book Eragon (2005) by Christopher Paolini. The book enjoyed great success and has led to three sequels, Eldest (2005), Brisingr (2008) and Inheritance (2011). Part of the fascination with Eragon is the fact that Christopher Paolini was only twenty years old when he wrote the book. Although this claim is less impressive when one learns that Paolini’s parents own a small publishing firm and published the book first before it was picked up by major distributor Alfred A. Knopf. In this light, Christopher Paolini doesn’t quite seem to be as much the brilliant young author who made a sale based on his writing skill, rather than someone who has traded upon a favour from his family. Although I enjoy reading fantasy, I read little of it anymore as a rule. Most of the abovementioned writers and their works have blurred into such a generic sameness that the stories are dull and repetitive. As a result, I never ended up reading Christopher Paolini’s books when they came out. (I am informed however by a friend that the book has been gutted by the film).

Eragon is directed by Stefen Fangmeier, a former Industrial Light and Magic visual effects supervisor who has worked on films such as Twister (1996), Speed 2: Cruise Control (1997), Small Soldiers (1998), GalaxyQuest (1999), The Perfect Storm (2000), Master and Commander: The Far Side of the World (2003) and Lemony Snicket’s A Series of Unfortunate Events (2004). With the box-office and critical drubbing that Eragon received, Fangmeier subsequently returned to visual effects and has yet to take up the director’s chair again.

The most generous thing one could say about the film version of Eragon is that Stefen Fangmeier excels in the area he does best – in the visual effects department. The dragon is expectedly very convincing and soars magnificently once it takes to its wings. The rest of Eragon – well … Eragon feels for all the world like a film where nobody involved had ever read a fantasy novel or seen anything other than The Lord of the Rings before. Even though Christopher Paolini’s book was a generic sword and sorcery work, the film feels like it has gutted this of all but the most minimalist plot elements. In fact, what Eragon feels like is more a synopsis for a story than an original world or drama of any depth.

To its credit, Eragon looks expensively photographed and put together. However, it has Lord of the Rings wannabe stamped all over it. Everything seems to be trying to walk in Peter Jackson’s footsteps – from identical sweeping helicopter tracking shots following the adventurers across the land to the orc lookalikes, Garrett Hedlund as a ranger who is clearly modelled after Viggo Mortensen’s Aragorn, to the arrival at the Varden stronghold, which almost seems as though we have arrived in Rivendell in The Fellowship of the Ring again, and of course all the armies massed up in battle. Eragon even goes so far to employ Peter Jackson’s Weta Workshop to provide the visual effects, clearly hoping that in doing so lightning will strike for them as well.

Even more than it is a copy of Peter Jackson, Eragon feels like it has been copied from Star Wars (1977) – the young orphan farmboy raised by his uncle who is then slaughtered, not before the farmboy runs away to join the rebellion and become a pilot/Dragon Rider, discovering along the way an inner magic that he must master for true success; the mentor who teaches the young hero in the secret ways and tragically sacrifices his life to save his young ward; the dark lord with supernatural powers who kills all underlings who fail him; the princess held in the thrall of the dark lord that needs rescuing by the hero; the big effects climax where the tiny outnumbered rebel forces must take on the vastly larger armies of the evil empire and where the hero’s lone flying ability and inner magic single-handedly saves the day.

Eragon does manage to array an impressive cast, including such award-worthy names as Jeremy Irons, John Malkovich, Robert Carlyle and Djimon Hounsou. Alas, having brought such names together, Eragon does nothing except shove them into one-dimensional roles. John Malkovich and Djimon Hounsou barely have any more than five minutes screen time apiece. Jeremy Irons does the nearest to providing a rich and likeable character that the film gets, although even here he cannot escape the ominous prediction that falls over Eragon before one sits down to watch of “Oh no, what’s Jeremy Irons doing in another crappy sword and sorcery film?” – following Dungeons & Dragons (2000). The worst acting comes from newcomer Ed Speleers who is bland and utterly forgettable. Indeed, Ed Speleers proves to be an even more wooden lead than Hayden Christensen was in the Star Wars prequels.