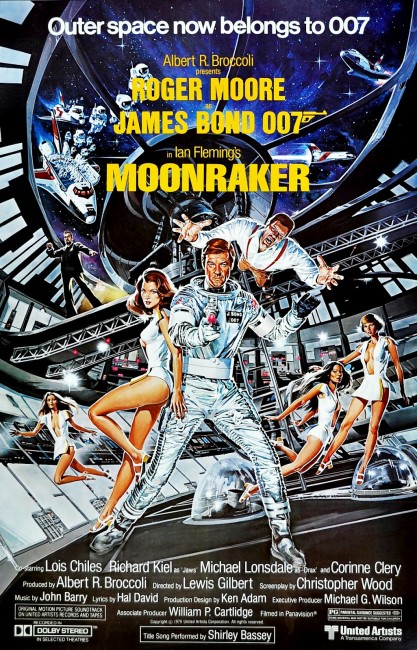 James Bond is sent to investigate after the Moonraker space shuttle, on loan to the British from the Americans, is hijacked in mid-flight while being transported on the back of a 747. The trail takes Bond from California to Venice to Rio de Janeiro, up the Amazon and finally aboard an orbiting space station. In the course of events, Bond comes up against his old enemy, the steel-toothed assassin Jaws and the shuttle’s millionaire designer Hugo Drax who is planning to drop a deadly toxin from orbit in order to wipe out the world and repopulate it with his own perfect specimens.

Moonraker was the eleventh James Bond film and a strong contender for the worst of the series (although it does have a surprising number of champions who regard it as likeably silly fun). It is here that the James Bond series reached its most extravagant heights. When critics (myself among them) call the Roger Moore Bond films large-scale cartoons, Moonraker is invariably what comes to mind. It is the nadir of the James Bond series’ excesses.

With the previous entry in the series The Spy Who Loved Me (1977), Albert R. Broccoli had taken over control of the series from his former producing partner Harry Saltzman. Broccoli’s immediate plan was to dramatically increase the scale of the films. With The Spy Who Loved Me, he built the world’s largest soundstage and took the film to five international locations. When it comes to Moonraker, Broccoli has attempted to make things even bigger. The sets are huge, the special effects and stunts amazing, the gadgets more elaborate than any previous film, while the film boasts the most international settings of any Bond film – Venice, Rio, France (where the film was shot instead of England due to dramatic tax hikes), Guatemala (for the Amazonian scenes), Cape Canaveral in Florida – and, if you like, up into orbit. Of course, the downside of this is that Moonraker is so insistently spectacular that Bond ends up getting lost in it. At least in The Spy Who Loved Me, Bond was a person; here he is just a cartoon figure in the middle of the show.

Moonraker‘s problem was that it was trying to compete in the same arena as Star Wars (1977), which had come out and changed the face of cinema just after The Spy Who Loved Me was released. The success of Star Wars saw Albert R. Broccoli changing the directions of the James Bond series to compete amid the new science-fiction boom. This is never more clearly demonstrated than by looking at the end of The Spy Who Loved Me, which announces that “James Bond Will Return in For Your Eyes Only“.

Broccoli instead turned to the most overtly science-fictional of Ian Fleming’s books and upped the book’s scope by placing James Bond into orbit, as well as adding space marines conducting laser gun shootouts. (In a further acknowledgement of the influence of the new science-fiction boom, the door to the lab in Venice even plays the theme tune from Close Encounters of the Third Kind (1977), the one other big success of the 1977 science-fiction boom). In promotional publicity, Albert R. Broccoli tried to make the claim that they were making “science-fact, not science-fiction” – although such claims are patently absurd and there is a good deal of silly science – sound in a vacuum, rotating space stations with gravity brakes and on/off zero g spots, and NASA demonstrating military technology that is waaaaaaaay in advance of current developments.

Moonraker was the last of the Ian Fleming novels to be filmed (that is novels as opposed to Fleming book titles – the two subsequent films take their names from his story collections). There is almost nothing in common with the Moonraker film and the Ian Fleming novel Moonraker (1955). All that the two share is the title and the villain Hugo Drax who is an aerospace industrialist. In the book, Drax is a former Nazi whose face had been destroyed during a bomb blast who took the identity of a British citizen following surgical reconstruction. His evil scheme consisted of plans to fire a nuclear missile on London. (In an interesting trivia note the climax of the book with Drax firing his nuclear missile and Bond diverting it from its target to land on Drax’s submarine instead was used in The Spy Who Loved Me, while the surgically altered industrialist later turned up as the main villain in Die Another Day [2002]).

Moonraker featured Lewis Gilbert in his third and final outing in the director’s chair for the James Bond series, Gilbert having previously directed The Spy Who Loved Me and You Only Live Twice (1967). One peculiarity of the Lewis Gilbert Bond films is that each entry heavily rehashes plot elements of its predecessor. The Spy Who Loved Me rehashed You Only Live Twice‘s plot of rockets being swallowed up and abducted from orbit and the climactic assault on a base complex. Likewise, Moonraker rehashes a good deal of The Spy Who Loved Me‘s plot – both films feature a millionaire transport industrialist having built his own sanctuary from which he is plotting to destroy the surface world and establish his own master race. Both films also feature the steel-toothed henchman Jaws, as well as a pre-credits sequence wherein Bond takes a mid-air dive seemingly without a parachute.

As has been the case for some time in the James Bond series, the screenplay for Moonraker only exists to string together locations, action sequences and bedroom encounters. There are some excruciating puns – like the final gag where Q keys up a videolink with the shuttle to find Bond making out in zero g “I believe he is attempting re-entry, sir.” This is a problem best demonstrated by explaining that screenwriter Christopher Wood is better known as Timothy Lea, author of the interminable schoolboyish Confessions books and later films, and whose same level of crude innuendoes and puns permeate the script here. Lois Chiles makes an utterly bland heroine and French actor Michel Lonsdale a wooden villain – rarely has any Bond villain had so little presence.

Moonraker‘s greatest problem is that it is squarely aimed at slapstick humour and that it plays everything down at the level of a children’s cartoon. Bond’s Venetian gondola turns into a hovercar that he then drives up onto the Venetian streets – cut to pigeons doing double-takes and someone looking at the label on the bottle of wine they have been drinking just like a Keystone Kops sequence.

While in The Spy Who Loved Me, Jaws had some menacing threat, here he has become nothing more than the equivalent of Wile E. Coyote in the Road Runner cartoons. His invulnerability in the face of constantly fatal accidents becomes an ongoing joke – the film’s pre-credits stunt sequence begins on some fine stuntwork but ends with Jaws crashing into a circus big tent without a parachute; during the Amazonian boat pursuit sequence, Bond sails over a waterfall in a hang-glider while the wheel of Jaws’s boat comes off in his hands and he goes plummeting over; in Rio, Bond escapes the fight aboard the cable-car while Jaws goes crashing into the ground in his gondola. About all that is missing here is having Jaws leave a silhouette when he impacts into the ground. Mindedly, Warner Brothers never did anything as nauseatingly lame with Wile E. Coyote as the climactic scenes where Jaws gets a girlfriend in diminutively bespectacled 5’2″ Blanche Ravelec, sees the error of his way and helps Bond save the day.

Despite almost universally negative reviews and a big thumbs-down from Bond fans, Moonraker was the highest grossing of all the James Bond films up until GoldenEye (1995) sixteen years later. Perhaps it was simply that the film was carried by Star Wars mania and the popularity of the science-fiction boom. Nevertheless, Albert R. Broccoli did listen to the Bond fans rather than the box-office numbers and the next entry in the series For Your Eyes Only (1981) was an admirable attempt to pare away gadgets, strip out the fantastic elements and bring the series down to a relative level of realism. As a result, For Your Eyes Only is the best of the generally forgettable Roger Moore Bond films. Alas, it was not a huge success and so for the next two entries, Octopussy (1983) and A View to a Kill (1985), it was back to the same cartoonish unseriousness and ludicrously over-the-top action sequences.