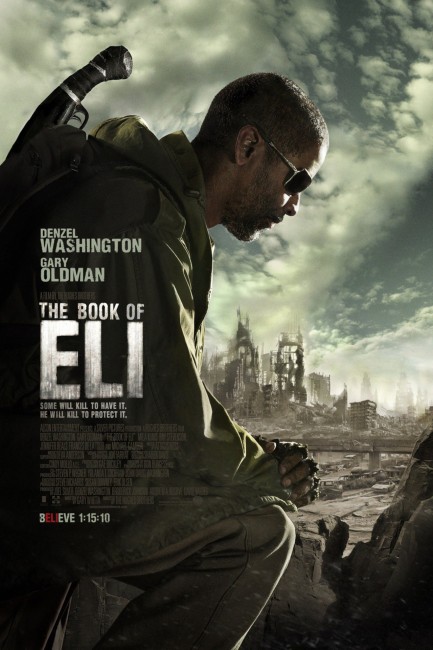 It is several years after the world has been destroyed by a nuclear holocaust. A lone man wanders the desert wasteland, living on what he can find and despatching all marauders. The man arrives at a small township where he comes to the attention of the town’s leader Carnegie after killing several attackers in a bar. Carnegie sends the woman Solara to inveigle the man to stay. When she learns that the man carries a book with him, Carnegie becomes determined to obtain this at all costs. The man survives Carnegie’s attempts to kill him and heads back out into the wasteland, followed by a fascinated Solara. From him, she learns that the book is the world’s last remaining Bible. It has the power to bring civilisation back together but Carnegie seeks to use it to bolster his own control. As they continue on, Carnegie comes after the man with an armed force determined to get the Bible.

The Book of Eli was a puzzling oddity upfront. The trailer suggested nothing more than a standard post-holocaust action film – we have seen numerous of its ilk since the success of Mad Max 2 (1981). Equally, it came with the high profile name of Denzel Washington attached to it (with Washington even having signed on as a producer), which suggested it would be something more than that. Moreover, the film was granted a widespread cinematic release rather than going directly to dvd shelves as most post-holocaust action films do these days. It left me wondering what spins the filmmakers could possibly put on the theme that would make it stand out. Certainly, after the redefinition of the genre by the searingly bleak The Road (2009) only two months earlier, one wondered how it would be possible for anybody to go back and conduct a standard post-holocaust action film any longer. And then there was the title, which sounds more like it might be a lost chapter of one of the Minor Prophets of the Old Testament or The Book of Mormon than a post-holocaust action film.

The Book of Eli is directed by the twin Hughes Brothers, Allen and Albert. The Hughes Brothers started out making films about ghetto/gangsta life with the likes of Menace II Society (1993) and Dead Presidents (1995), before turning to documentary with the fascinating American Pimp (1999). Their most high-profile work to date was the disappointing Jack the Ripper film From Hell (2001), while subsequent to this Albert solo directed the prehistoric drama Alpha (2018). They have also served as producers and occasionally directors for the tv detective series Touching Evil (2004). They were at one point associated with the long-planned live-action English-language remake of Akira (1988).

As The Book of Eli opens, it feels very much that the Hughes Brothers are taking a leaf of inspiration from The Road. The opening scene consists of Denzel Washington in a gas mask in the forest hunting what looks like a bald furless cat with a crossbow amid a rain of falling ash could slot into The Road with no problem at all. So too could the images of desolation – Denzel scrabbling among the ruins looking for food and water; he walking along abandoned freeway overpasses; the encounters with hijackers that want to rob him for something to eat (or as something to eat). However, as soon as we come to the scene with the hijackers and Denzel Washington erupts into action to slaughter half-a-dozen men in about thirty seconds flat, The Book of Eli starts to reveal its true colours as belonging to the Mad Max school of comic-book action.

The depiction of a world of harsh survival is quickly forgotten and very soon the action element takes over. It is here that The Book of Eli starts to suffer from an identity crisis. It gives the strong impression that the Hughes Brothers did not have a solid lock in their heads on the type of film they were trying to make – whether it is a serious drama, an action film or a religious parable. They keep throwing in action scenes with Denzel Washington erupting into a martial arts super-warrior and eliminating groups of people en masse. While most of these are competently handled, the Hughes Brothers do not exactly give the impression that they missed their calling as action movie directors.

Other scenes topple over into a comic-bookish silliness – the rather laughable scene where the military convoy turns up at the house in the middle of nowhere and Michael Gambon whips up the top of the couch to reveal a cache of arms. The silliest scene is where Denzel Washington stands out in the middle of the street as gunmen shoot at him, managing to remain completely unharmed despite his lack of any cover amidst the gunfire being targeted at him, before blasting each of the dozen shooters away within a matter of seconds. It almost feels here like the Hughes Brothers are attempting to replicate the absurd Gun Kata sequences in Kurt Wimmer’s Equilibrium (2002) or Ultraviolet (2006).

The most bizarre part is when The Book of Eli reveals itself as a religious allegory. It is hard to know exactly what the intention of either the Hughes Brothers or screenwriter Gary Whitta were in wheeling this out but The Book of Eli looks for all the world like it is trying to be part of the flood of films pitched to the evangelical Christian niche market we had a few years ago after the huge success of Mel Gibson’s The Passion of the Christ (2004) that included works like The Chronicles of Narnia: The Lion, The Witch and the Wardrobe (2005), The Exorcism of Emily Rose (2005), The Nativity Story (2006), Evan Almighty (2007) etc.

It is not something you would guess from the trailer and promotion but the film plays out its Biblical allegory surprisingly earnestly – Denzel Washington says grace before dinner, recites the Lord’s Prayer, talks about receiving visions and hearing voices in his head, about the necessity of being guided by faith, while he seems to be divinely protected in his quest, miraculously surviving being directly shot at several times. Moreover, the overarching theme of the film is of The Bible holding the hope for uniting civilisation back together again.

Alas, The Hughes Brothers fail to get inside these elements enough to let us know whether they are making something according to their own personal faith or it is just a novelty gimmick to hang a post-holocaust action film on. Whichever way, the results seem bizarrely awkward up on screen. The ending the film reaches with Denzel Washington narrating the memorised book to Malcolm McDowell’s librarian has been lifted from Fahrenheit 451 (1966).

I regard Denzel Washington highly as an actor. However, he has never had much luck when he has turned his hand to the action genre – see Virtuosity (1995), Man on Fire (2004), Deja Vu (2006), Safe House (2012), with the minor exceptions of The Taking of Pelham 1 2 3 (2009) and Unstoppable (2010). As a standard Clint Eastwood tight-lipped Man (mostly) Without a Name, it is a case of Denzel Washington bringing his prodigious acting talent to bear on a role that could have been filled by any monosyllabic action hero or kickboxing champion and seeming over-qualified for the part. It is good to see Gary Oldman who has kept far too low a profile for the last few years – outside of small supporting roles in the Harry Potter and Batman franchises – back doing the type of bad guy role he does well. Tom Waits also shines in a small part as a trader. The lovely Jennifer Beals always livens any film that she appears in but here suffers from a severely underwritten part.