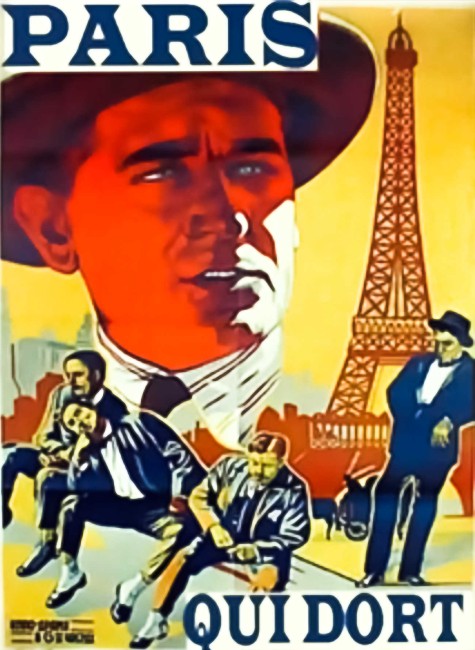 aka At 2:35; The Invisible Ray; Paris Asleep
(Paris Qui Dort)

The night watchman on the Eiffel Tower comes off his shift to find people all over Paris frozen in motion. Eventually he meets a group of unfrozen people who arrived that morning off a plane from Marseilles. The group enjoys the unfettered freedom and luxury of the city, dining in restaurants and taking jewellery as they want, although boredom soon sets in and the men fight over the woman. They then receive a radio message directing them to come to a particular address. There they meet a scientist who tells them how he invented a ray that has frozen the whole city. They were unaffected because the Eiffel Tower and Marseilles was out of the ray’s range.

The Crazy Ray was an early experimental film made by the celebrated French director Rene Clair. It is hardly a classic film but is notable for the introduction of many themes that would later become cliches of the post-holocaust genre. It was the first film to take up the theme of the deserted city.

The film quickly progresses through the storytelling arc that has become the established formula of this particular genre – the survivors meeting up, their joy and playfulness at having the city to themselves and being able to live without the normal constraints of civilisation, the decadent pleasures that soon disintegrate into jealousy and petty squabbling, the end restoration of the status quo. The characters are the standard representational cross-section of society that turn up in these isolated survivors stories – a merchant, a thief, a detective, a handsome leading man, a token woman.

Unlike the more serious treatments of the theme that would follow, The Crazy Ray is mostly played for light comedy, and never more than that. Amidst this, there are occasionally some striking images – particularly the pure decadence of Madeleine Rodrigue lounging on the side of the Eiffel Tower with a pearl necklace hanging from one ankle and the menfolk making paper darts out of money. Clair uses simple stop-action camerawork to represent the freezing and restarting of time. The effect is simple, nevertheless marked. The Crazy Ray is not a particularly profound film but is light and enjoyable.

Rene Clair’s other films of genre interest are:– the surrealist silent films Entr’acte (1924) and The Imaginary Voyage (1925); the Hollywood light fantasy The Ghost Goes West (1935); the appealingly frothy I Married a Witch (1942) about a romance between a mortal and a witch; It Happened Tomorrow (1944) about a man who can read tomorrow’s headlines; the Agatha Christie murder mystery And Then There Were None (1945); Beauty and the Devil (1950), a retelling of the Faust story; and Beauties of the Night (1952), a charming fantasy about a daydreamer.