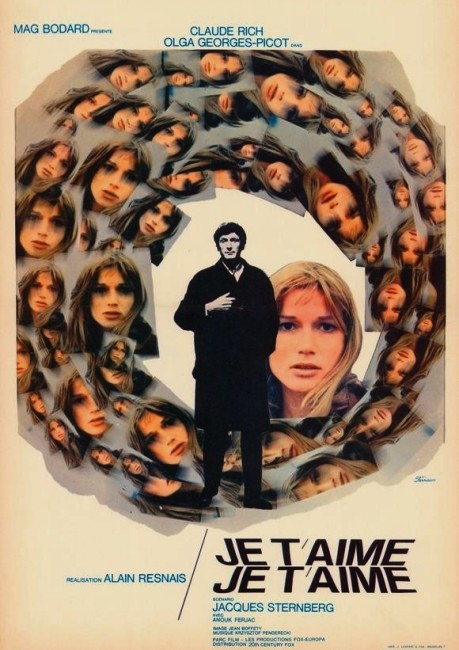 Scientists go to Claude Ridder, a man who has been hospitalised in Paris after attempting to commit suicide by shooting himself, and recruit him as a subject in an experiment. He is shown a mouse that they have been able to send back in time. He is then introduced to a time machine in which he will be sent back one year and be brought back after several minutes to report on what he sees. However, once inside the time machine, something goes wrong and Ridder finds that he is uncontrollably moving back and forward through the events of his own life. He remembers how he was working at a printing firm and became attracted to Catherine, an employee who seemed to have no interest in the job. They moved in together and later to Glasgow but she had little interest in anything. Claude had an affair with a neighbour Wanda but Catherine did not seem concerned. Ridder is drawn back to the memory of Catherine’s death and his feelings of guilt and responsibility over this.

Alain Resnais is a French director who became a critical favourite during the French New Wave of the 1960s, even though he had been making films much earlier and denied he was ever part of the New Wave. Resnais first gained attention with the double slam of Hiroshima Mon Amour (1959) and the visually extraordinary surrealist film Last Year in Marienbad (1961). Over the next few years, Resnais’s work became increasingly politically focused with the likes of Muriel (1963) and The War is Over (1966). Resnais was consistently working up until his death in 2014 with his greatest acclaim coming from the film Mon Oncle d’Amerique (1980). Je T’aime, Je T’aime did not get widespread release when it came out and is usually one of the more overlooked works in Resnais’s oeuvre.

Most of Alain Resnais’s films centre around the power of memory in one way or another – all of his characters seem to live in the past as opposed to the present, yet at the same time he is concerned with how memory is vague and subject to selective reinterpretation. Hiroshima Mon Amour concerned a French woman and Japanese man deconstructing their former relationship in the shadow of Hiroshima; Last Year in Marienbad was an attempt to capture the shifting vagaries of memory as a couple sought to remember a romantic tryst the year before; Providence (1977) concerned an aging writer reinterpreting his past as selective fiction; and Smoking/No Smoking (1993) was one of the earliest variants on the alternate life choices drama. Resnais’s later films left these preoccupations alone and took up left wing politics and an interest in music.

Unlike Chris Marker’s not dissimilar La Jetee (1962), Resnais does not concern himself with any of the conundrums and paradoxes presented by the time travel process. You could easily take the time machine scenes out and assemble the rest of the film into a linear narrative where you would end up with a standard French relationship drama. In a more standard science-fiction drama, the reasons why a suicide had been chosen for the experiment would have had to have some purpose – the cardinal rule being that if you introduce a plot element it must be used in some way – but for Resnais it is only because that is the type of character he wants to tell a film about.

I had heard about Je T’aime, Je T’aime for years before finally getting to see it. This built up a certain expectation. Many critics and genre commentators had praised it, while I had a liking for some of Alain Resnais’s other work, especially the extraordinary Last Year in Marienbad; equally, one was expected to be disappointed as much of the French New Wave films from this era descended into pseudo-intellectual incomprehensibility – most notably, Jean-Luc Godard’s unintelligible and vastly over-praised Weekend (1967).

Oddly, Je T’aime, Je T’aime is none of these – it is not the masterpiece that sits up alongside Marienbad, it lacks the earlier film’s extraordinary visual adventurousness and is shot no differently from a standard film of the era. Equally, while there is the odd moment where the film does drift off into the obscure intellectual posturing and pretensions of this era – Claude Rich making cryptic comments “You smell like drownings” or delivering a monologue on the dreariness of 3 pm in the history of time – mostly it doesn’t.

Apart from the opening set up of the scientific experiment, almost all of Je T’aime, Je T’aime consists of moving back and forward through the history of the relationship between Claude Rich and Olga Georges-Picot (who would almost certainly be classified as suffering from depression today) and to a lesser extent his entanglement with another girl (Anouk Ferjac) with whom he has an affair. The principal effect of the film is the way in which Resnais flips back and forward in time between brief moments in the relationship.

Most of the film exists as a series of fragmented scenes that last from a single shot to ones that go on for several minutes. These scenes come at random with no apparent connection between any of the flips. Throughout we are trying to piece together the nature of the relationship and especially the mystery about what caused Olga Georges-Picot’s death and whether Claude Rich was responsible. Though her death is the film’s central focal point, it is only something that Resnais alludes to but never depicts or explains.

Part of what makes Je T’aime, Je T’aime disappointing is that while this non-linear narrative must have seemed like something breathtaking and original in 1968, seeing the same today is invariably disappointing because the cinematic language that Resnais experiments with has seeped so much into the regular narrative of film – see the likes of Open Your Eyes (1997) or Memento (2000), while Twelve Monkeys (1995) did the same thing in a much more overtly science-fictional vein.

Indeed, the essence of what Alain Resnais does here – in making a time travel film that takes place in terms of a series of random subjective flips within the protagonist’s own memory – predicts what Kurt Vonnegut Jr did not long after in his classic novel Slaughterhouse Five; or the Children’s Crusade (1969). In fact, Je T’aime, Je T’aime is a far more accurate depiction of the essence of Vonnegut’s book and its narrative style than the official Hollywood film adaptation Slaughterhouse Five (1972).