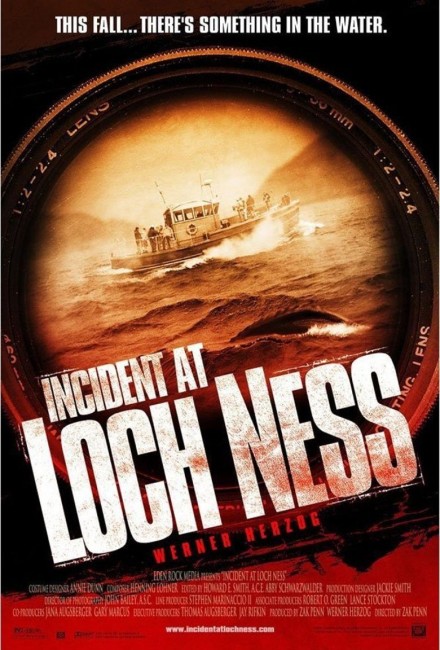 The renowned filmmaker Werner Herzog joins forces with producer/screenwriter Zak Penn to make ‘Enigma of Loch Ness’, a documentary about the myth of the Loch Ness Monster. At the same time, another film crew is making a documentary about Herzog. As soon as Herzog steps off the plane in Scotland, the production is beset by problems. As they set out onto the loch in a hired boat, Herzog finds himself frustrated by Penn who seems determined to turn the documentary into something sensational – bringing on board a Playboy model who has the dubious job of ‘sonar operator’, trying to get shots of a fake head in the water. The documentary is then thrown awry when something in the water starts attacking the boat.

Incident at Loch Ness is a rather amusing mockumentary. It comes from Zak Penn who is better known as a screenwriter. Penn first appeared as co-writer of the clever and underrated Last Action Hero (1993), which played around with layers of film and reality in similar ways to Incident at Loch Ness. He then went onto write the likes of Inspector Gadget (1999), Behind Enemy Lines (2001), the serial killer thriller Suspect Zero (2004), Steven Spielberg’s Ready Player One (2018) and Free Guy (2021) and various Marvel Comics adaptations such as X2 (2003), Elektra (2005), X-Men: The Last Stand (2006), The Incredible Hulk (2008) and The Avengers (2012), as well as created the original superhero tv series Alphas (2011-2).

Zak Penn’s collaborator here is the great German filmmaker Werner Herzog who has made films like The Mystery of Kaspar Hauser (1974), Strosczek (1977) and three other genre films, Nosferatu the Vampyre (1979), The Wild Blue Yonder (2005), which was also a mockumentary, and My Son, My Son, What Have Ye Done (2009). Werner Herzog is best known for Aguirre, the Wrath of God (1977) and Fitzcarraldo (1982), both of which were made under extraordinarily arduous conditions where Herzog took entire film crews into the Amazonian rainforest.

The clear influence on Incident at Loch Ness is the mockumentary approach of The Blair Witch Project (1999). The difference here is that Zak Penn plays everything for deadpan comedy. The film starts out seriously, where it appears that we genuinely are watching a documentary being made. We watch Werner Herzog trying to make his film and Penn trying to subvert it with small details like his insistence on the crew wearing uniforms and putting the sign on the ship. Gradually, this gives away to something increasingly more absurd (all presented in perfect straight-face) with the introduction of a Playboy model and a rather funny scene where Penn and Herzog are arguing in the office about it not being a hoax and someone walks in in the background with a model Nessie head. Perhaps once the gag is clear, some of the jokes seem a little obvious. Although there is the hilarious scene where Penn pulls a flaregun on Herzog, demanding he start filming, in clear parody of Herzog’s notorious gun incident with Klaus Kinski on the set of Fitzcarraldo.

Even though one knows that Incident at Loch Ness is a mockumentary before watching it, Zak Penn wraps it up in so many layers of real and pseudo-real that you are not entirely sure what is real and what is faked. It was revealed that in reality only some of the crew knew that it was not a real documentary, further adding to the blurred lines. Even when the film starts to get into areas that are clearly fictional, much of the line continues to be blurred. Many of the characters present – Gabriel Beristain, Russell Williams and in particular Kitana Baker who plays a Playboy model brought in to spice the proceedings here and is a Playboy model in real life – are real people, leaving one unsure altogether whether they are in on the joke or their parts were for real. It is not entirely clear if Kitana Baker is someone who is in on the joke or is cast as a bimbo unaware that she is.

In this sense, Incident at Loch Ness is the ultimate postmodern conceit – a mockumentary about the making of a documentary deconstructing the myth of Loch Ness where the attempt to subvert the documentary and make a fake film about the monster gets unwound by the real appearances of the monster (which are of course being faked for the camera by the filmmakers). It is head spinning trying to keep track of the multiple layers of reality going on. Almost certainly, whatever level the film was taking place on at any one moment must have been a major headache for Zak Penn to keep track of during the filming.

I have found Werner Herzog a fascinatingly articulate interviewee, particularly in his own documentary My Best Fiend (1999). Herzog brings the same articulate presence here and exudes a serenely untroubled wisdom when on screen. He is near perfect in the part. It is even more to his credit that he maintains his persona without a slip while playing a part in a clearly faked documentary. On the other hand, Zak Penn comes across on screen as both weasely and puppy-doggish in a way that makes you like his over-eagerness at the same time as you loathe his blatant dishonesty. On the other hand, Penn never quite gets the deadpan thing in the same way that Werner Herzog does and some of his nonchalantly funny offhand lines come out as obvious in the delivery.

Zak Penn subsequently went onto employ the same comedic mockumentary style in The Grand (2007) concerning a poker tournament, also featuring Werner Herzog as one of the players, and the documentary Atari: Game Over (2014).