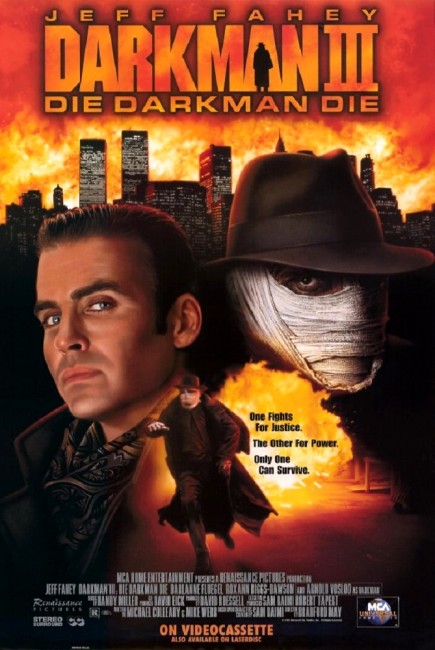 As Darkman, Peyton Westlake infiltrates and breaks up a major drug sale by steroid dealers. He is followed down into his hideout by Dr Bridget Thorne, one of the doctors present during the operation after his accident. She offers him an operation to restore his nerves and a DNA sequencer to perfect his artificial skin. Westlake discovers that Bridget is working for Peter Rooker, the kingpin behind the steroid dealing operation. Rooker wants to bottle Westlake’s strength as a new type of steroid and use it to create an army of supermen. During the operation, Rooker has Throne secretly insert a control device into Westlake’s body that will inflict pain whenever a remote is activated. Westlake then adopts Rooker’s face to break in and get the formula for the artificial skin from the safe in his home. Mistaken for Rooker by his wife Angela, Westlake finds himself emotionally connecting with and coming to have feelings for her.

While Darkman II was relatively so-so, Darkman III: Die Darkman Die is a far better effort. On one hand, it has many of the drawbacks that Darkman II had – the low budget shows through at times, there are a number of plot improbabilities and frank unbelievabilities (like a scene where Darkman manages to outrun a rocket on a railcar) and another earnestly bland performance from Arnold Vosloo.

However, where Die Darkman Die does work is in the central character conflict it sets up. The story twists about on a unique dilemma – that of Darkman wearing a mobster (Jeff Fahey)’s face as a disguise but in so doing coming to provide the care and attention the mobster never gave his wife and child and ending up falling for them but then being caught in the quandary of never being able to reveal his true face to them.

There is a scene in the middle that twists about this with considerable ingenuity – Darkman entering the house disguised as Jeff Fahey to find a surprise birthday party awaiting for him, he having to sit and perform a duet with the daughter then being caught as the police conduct a raid on the house, the wife thinking he wants a divorce and trying to confront him just as his face starts to melt.

Jeff Fahey makes for a better dual character than one might think. On the other hand, Darlanne Fluegel takes the opportunity to camp her role up, accompanied by some rather dreadful lines – “Life’s a bitch – and so am I.” Playing the role of the mobster’s wife is Roxann Biggs-Dawson (also known variously as Roxann Biggs and Roxann Dawson), who was cast as a regular as Lieutenant Torres on tv’s Star Trek: Voyager (1995-2001) just before Darkman III: Die Darkman Die premiered.