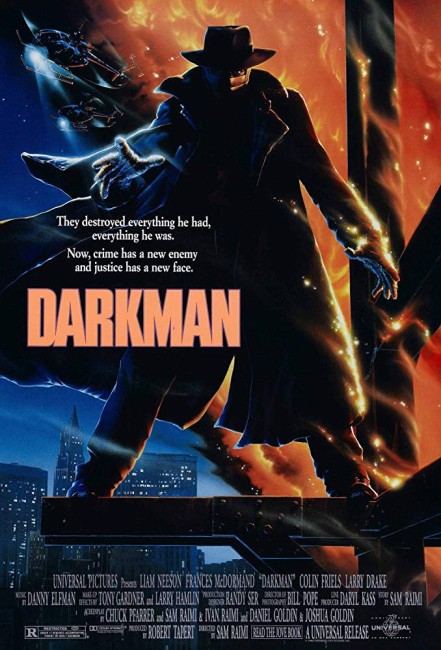 Attorney Julie Hastings finds documents that incriminate her employer, contractor Louis Strack Jr, in corrupt deals. Strack sends crime kingpin Robert Durant and his hoods to break into Julie’s boyfriend Dr Peyton Westlake’s laboratory and retrieve the documents. They brutally beat Westlake and leave him for dead as they blow the laboratory up. However, Westlake is thrown clear in the explosion. He is taken to a hospital with third degree burns over two-thirds of his body where doctors have to sever nerve endings to protect him from the pain. This also serves to give Westlake super-strength. Now crazed, he escapes the hospital and sets up laboratory in an abandoned warehouse. There he rebuilds his face using a synthetic flesh he has invented, although this can only remain stable for 99 minutes. Using the flesh, Westlake models a series of disguises for himself so that he can move among and revenge himself on Strack and his hoods.

Sam Raimi became a cult genre figure with the low-budget splatter hit The Evil Dead (1981) and its sequel The Evil Dead II (1987). In this fascinating but flawed film, Sam Raimi set out to create his own comic-book superhero. Most superheroes on film are ones that have been adapted from comic-books but Darkman is one of the few characters that are original to the big screen. Darkman is certainly a character that would not be out of place in the Justice League of America and the DC or Marvel Comics line-up.

Sam Raimi has designed Darkman as a comic-book film in the mean, moody and magnificent style of the then huge hit of Tim Burton’s Batman (1989). Conceptually, Darkman comes out like Batman where The Joker is the hero of the piece – combined with plot odds and ends from Doctor X (1932) and The Phantom of the Opera (1925) – while the look of Darkman resembles the black fedora and mask of The Shadow.

To tell the story, Sam Raimi employs the techniques of comic-book storytelling. He crafts some beautiful and evocative images echoing the character’s inner state that seem like perfect incarnations of the Dark Knight (1986) era Batman graphic novel covers – of Liam Neeson sitting crying amid the gargoyles on a roof against a stormy sky; his entry into the factory outlined by a foregrounded flight of birds; or the figure he cuts in black fedora, cape-like coat and bandaged face.

Unfortunately, Darkman doesn’t always come out with the clarity of the initial vision. Throughout the Evil Dead films, Sam Raimi developed an increasingly campier comic-book tone. He likes to run films as rollercoaster rides without too much concern for consistency and logic beyond the ride. Darkman, a film that does not easily sit with such an approach, is no exception. The campy approach intrudes into the moody and dark atmosphere that Sam Raimi is trying to create. Sometimes the way Raimi chooses to echo the character’s emotions comes out absurdly over-the-top – hysterically running through montages of crackling neurons or images of fairground wheels all spinning in unison. The scene where we see a burning skeleton thrown out the lab in the midst of the explosion always gets a big laugh from the audience – something that does not sit easily with the film’s seriousness of time. The initial comic-book darkness soon gets forgotten as the action elements taken over – during these scenes we see nothing of the Darkman that needs to hide in the darkness to keep his face – although the film does arrive at an effective ending.

Liam Neeson employs the painedly earnest form of external anguish he brings to his roles. He almost seems to be doing too much acting for the role and consequently his Westlake is too inconsequential to hold any superheroic stature. Frances McDormand is fairly watery in the heroine role. Australian actor Colin Friels is good, however he is overshadowed by Larry Drake. At the time, Larry Drake was using the horror genre to shake typecasting from his nice-guy image as the intellectually handicapped Benny on tv’s LA Law (1986-94) – and with Darkman, Dr Giggles (1992) and his appearance as the psychopathic Santa Claus in the All Through the House episode in tv’s Tales from the Crypt (1989-96), he was making good headway. There is a great scene where he uses a cigar clipper to chop off three of a gangland thug’s fingers to make each point and then announces “I’ve got seven more points to make.”

In the 1990s, Sam Raimi’s Renaissance Pictures, which became a major force in tv with series such as Hercules: The Legendary Journeys (1994-2000) and Xena: Warrior Princess (1995-2001), produced two direct-to-video Darkman sequels, both of which were shot back-to-back – Darkman II: The Return of Durant (1995) and Darkman III: Die Darkman Die (1996). Here the role of Darkman was inherited by Arnold Vosloo, later the title character in The Mummy (1999). Larry Drake made a return appearance as Durant in the Darkman II. The character was also uncreditedly regurgitated as the superhero in Dark Avenger (1990), an unsold tv pilot starring Leigh Lawson. Sam Raimi later returned to comic-book superheroes with Spider-Man (2002), Spider-Man 2 (2004) and Spider-Man 3 (2007).