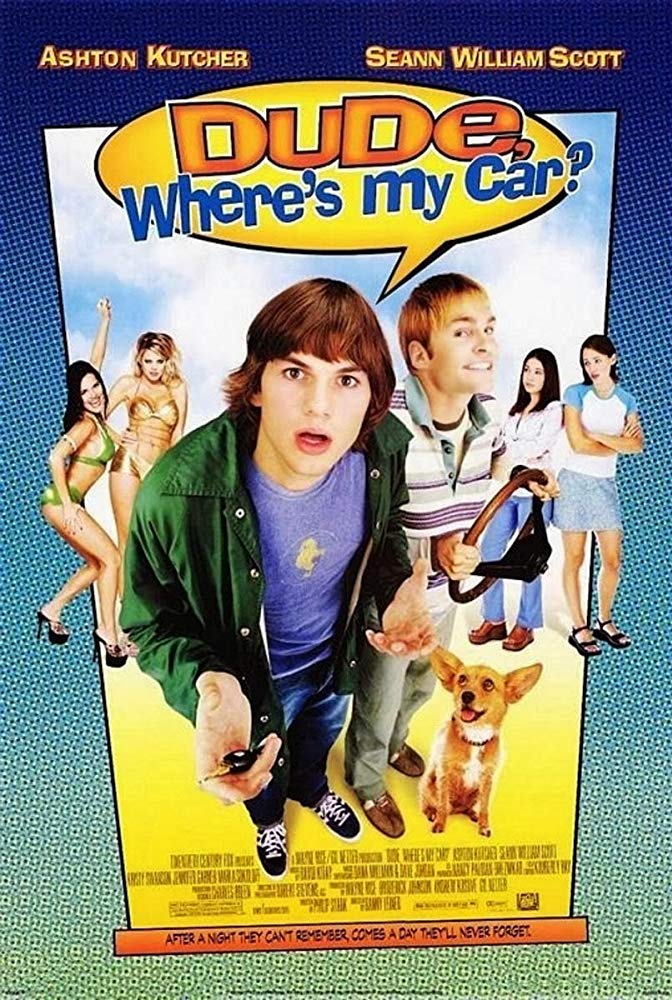 Jesse and Chester wake up after a night of partying unable to remember what they did the night before. Jesse’s car is missing. As they set out to find it, they discover that last night they somehow managed to trash their girlfriends’ house; go on a spending spree with drug money that was given to them by a transsexual stripper who now wants it back; and get hold of the all-powerful Continuum Transfunctioner that is now wanted by two rival groups of aliens, one a group of hot chicks who promise ‘oral pleasure’, and the other two bodybuilders with Swedish accents, as well as a group of religious cultists who want the device in order to travel to the stars.

Dude, Where’s My Car? is a film that leaves one’s mind boggled in trying to think how it managed to get greenlit somewhere, let alone be given a fair budget and enough of a studio push to end up hitting the Box Office Top Five during its opening week. Dude, Where’s My Car? is a stoner film – one that not only gives the impression that it was conceived under the influence of narcotics but directed and acted as well.

The two central characters appear to have been modeled on Bill and Ted’s Excellent Adventure (1989) or at least a cleaned-up version of Kevin J. Smith’s Jay and Silent Bob. The brain-croggling plot involves trans-sexual strippers; missing drug money; rival groups of aliens consisting of five jumpsuited women who introduce themselves in emotionless monotones as Hot Chicks and promise oral pleasure and their rivals – two emotionless gay bodybuilders with Swedish accents; a group of geek cultists who dress in plastic bubble wrapping; a reclusive ostrich farmer who imprisons all interlopers in cages; and a climax that is a homage to Attack of the 50 Foot Woman (1958).

Conceptually, the film falls somewhere between Repo Man (1984) and Doin’ Time on Planet Earth (1988) as directed by The Farrelly Brothers. Although surely it is The Farrelly Brothers after having inhaled a few bongs – the films’ conceptual mangle and sense of humour is one that only makes sense when perceived Under the Influence.

All of this has the promise of either being an extraordinarily silly or a potentially culty film. However, director Danny Leiner lacks quite what it takes to pull it off in the cult department. Most of the time the humour falls into the annoyingly dumb and adolescent variety such as the scene, heavily highlighted in the promotional campaign, with the two protagonists finding that they have tattoos, which ends up in a schtick: “What’s your tattoo say?” “Sweet. What’s mine say?” “Dude. What’s mine say?” “Sweet ……” When the film tries to be funny it usually isn’t – there is a very shrill and silly sequence with a Chinese takeout drive-through speaker. A scene with a woman in the police impound lot that plays Good Luck/Bad Luck verges on a minatory sense of black humour but instead dissolves into lowbrow farce.

Occasionally, the film strikes a bizarrely surreal note – the image of a dope-smoking dog with its own bong pipe. The funniest sequence is the one with the two heroes pulling up at a stoplight opposite Fabio and a beautiful girl. They imitate all of Fabio’s cool moves. When Fabio puts his arm around and kisses the girl, the film has the two of them putting their arms around each other too and then double-taking. At this point, one expects the film to do what most other teen movies would – have the two recoil in disgust at the potential homosexuality. However, quite against expectation the film has them kiss too. It is a funny gag because it subverts all audience expectation. That moment aside though, Dude, Where’s My Car?‘s bizarreness never takes flight.

Director Danny Leiner has a subsequent hit with another stoner comedy Harold and Kumar Go to White Castle (2004). The tattoo sequence was parodied in Scary Movie 2 (2001).