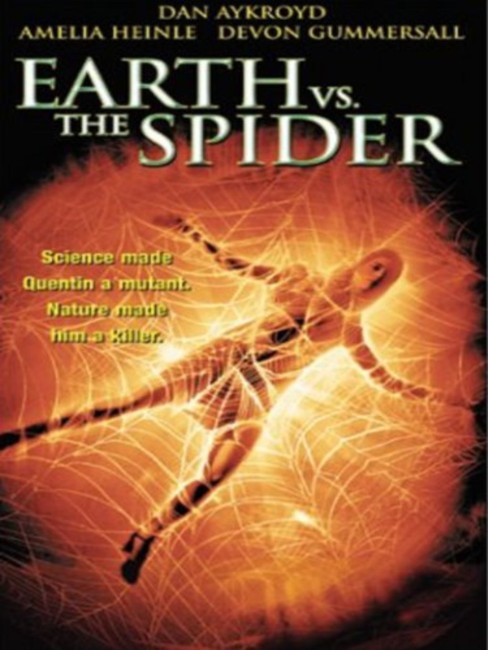 Security guard Quentin Kemmer is an avid comic-book reader who wishes that he had superpowers and the courage to ask out his neighbour Stephanie Lewis. When the laboratory he guards is broken into and his partner shot, Quentin sees an opportunity and takes an injection of the spider serum that the scientists are experimenting with, seeking to become like his favourite comic-book superhero The Arachnid Avenger. As Quentin revels in the newfound powers this brings, he finds he is also starting to mutate into a spider creature.

Earth vs. the Spider was one of a host of old AIP B movies remade for cable in 2001 under the umbrella table Creature Features and produced by former AIP head Samuel Z. Arkoff’s son Lou, monster make Stan Winston and actress Colleen Camp. Others in the series included The Day the World Ended (2001), How to Make a Monster (2001), She Creature (2001) and Teenage Caveman (2001).

Bert I. Gordon’s original Earth vs the Spider (1958) was a cheap giant bug film featuring a giant spider terrorizing a township. As with all the other films listed above, the only connection between the Creature Feature and the original is the title. Rather than a giant bug film, Earth vs the Spider 2001 is now more Earth vs Spider-Man. The film has been self-consciously construed as a take on Spider-Man – in the comic-book, Peter Parker was bitten by a radioactive spider in a lab; in the film, the central character is injected by radioactive spider serum in a lab. Moreover, he is a comic-book fan whose favourite strip is called The Arachnid Avenger.

Earth vs. the Spider 2001 is at its most interesting when it seems to be deconstructing Spider-Man. The central character takes the spider serum in order to become superheroic but when he does try to intervene in a convenience store robbery fight, he finds things a little less black and white than they are in comic-books.

Unfortunately, director Scott Ziehl lacks any great insight into these scenes and they emerge routinely. The superheroic deconstruction only turns into a routine monster movie where Devon Gummersall’s transformation into spider creature comes modeled on Jeff Goldblum’s transformation in The Fly (1986). Here the creature effects are among some of the more routine and less convincing of the Stan Winston Workshop’s contributions to the Creature Features series.

Elsewhere, director Scott Ziehl has circled around direct-to-video/dvd territory with sequels like Cruel Intentions 3 (2004) and Road House 2: Last Call (2006). Most of Ziehl’s other films are thrillers and action films and his other genre films consist of Demon Hunter (2005), the backwoods brutality film Exit Speed (2008) and the psychic thriller Shadow Witness (2012).